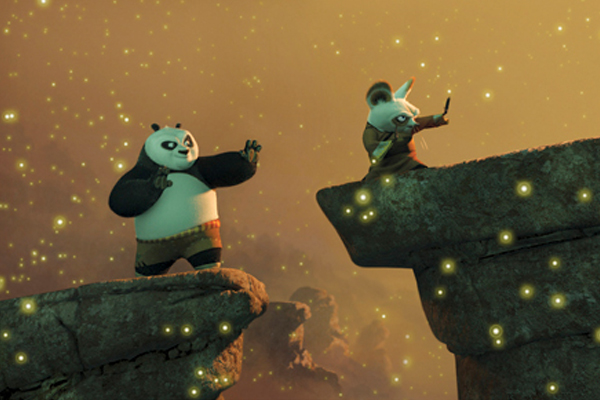 Panda Kung Fu’s His Way Around the World

A Kung Fu-ing panda is far from realistic. But an interview with the co-director of the summer hit film “Kung Fu Panda” reveals that Chinese cultural accuracy was one of the most important elements in making the movie.

Mark Osborne grew up in New Jersey, has never been to China and has only seen a giant panda once (at the San Diego Zoo, nonetheless). On the other hand, his summer hit film “Kung Fu Panda” tells the story of a giant panda named Po. And this isn’t just any old bear. Po—whose ancestors are geese—wants to learn the martial arts from a red panda, a tortoise and a praying mantis, among others. Osborne insists, however, that realism and accuracy were his watchwords in making the movie.

The co-director was so concerned with sensitivity to Chinese culture, in fact, that when Po and his master bow to each other after throwing away a dumpling, the distinct sound of it landing in a bowl off-camera can be heard.

“Someone brought up to us that it’s very taboo to waste food in China because there’s a lot of hunger,” Osborne said. “[The sound is] so subtle that people may not pick up on it, but if someone is sensitive to it, they may pick up on that cue and feel okay about it. That’s the level of exactitude we were really striving for as much as possible.”

As much exactitude as any movie about a talking panda who overcomes all odds to become a kung fu master can have, anyway. The degree of caution and care the filmmakers poured into “Kung Fu Panda” appears to have paid off. The movie has already won over audiences and most critics on both sides of the Pacific Ocean.

Released by DreamWorks and Paramount Pictures on June 6 in the U.S. and on June 20 in China, “Kung Fu Panda” was number one in the American box office on its opening weekend and had earned $275 million worldwide at press time. It was crowned a New York Times Critics’ Pick and even garnered an 88 percent rating on the movie website Rotten Tomatoes.

Audiences in China seem to agree. The movie has already made more than $12 million, which was one of the strongest openings in China in recent years. It did well nationwide starting from its opening weekend, except in one area: Sichuan, the epicenter of the May 12 earthquake and home of the nation’s largest panda reserve, where destroyed migratory routes have many officials concerned. The release of “Kung Fu Panda” was delayed there for two days to “appease the survivors” of the earthquake, according to the State Administration of Radio, Film and Television, which at first felt a comedy was inappropriate given the state of mind of people in the region.

As the box office results suggest, most Chinese who have seen or heard about the film like it. “Unless you are looking for an excuse to be offended, you will see that the film positively promotes Chinese culture and the panda’s image…,” a commentary from The Modern Express said. A commentary from the Shanghai Evening Post agreed. “The panda is cute, the Kung Fu is Chinese, the story is hilarious, and the theme is inspiring!”

One Chinese blogger, however, disagreed and launched a boycott campaign online, accusing Hollywood of trying to profit from Chinese culture. “In my artistic heart, I cannot accept the fact that Hollywood wants to make a fortune from the Chinese people after the huge earthquake in Sichuan,” said Zhao Bandi, a performance artist and designer, wrote in his blog. Zhao, who had not seen the film, continued, “It’s an ugly bear. I wouldn’t even dignify it with the name ‘panda’.”

And that’s exactly how Osborne says he wanted it.

And as for Zhao’s description of Po as an “ugly bear,” at least a few characters in the film would agree.

The premise of the story is simple and realistic enough: Po, voiced by Jack Black, has long dreamed of something besides owning a noodle shop. His father got it from his father who inherited it from his father who won it from a pig in a game of mah-jongg, but Po wants to become a kung fu master, one whose enemies “would go blind from over-exposure to pure awesomeness.” His dreams of fighting alongside his idols, the Furious Five, are seemingly fulfilled when he is chosen as the “Dragon Warrior” by Master Oogway, the temple’s founder and reigning kung fu teacher.

The Five and their mentor Master Shifu—the greatest kung fu teacher in all of China—have other plans, however. They ridicule him for being untrained and out of shape; Shifu even lambastes him for his “fat butt, flabby arms and ridiculous belly.” There is no way—and they all agree on this—that he will become the most powerful fighter in all the land, one who will be able to defeat Tai Lung, the film’s villainous snow leopard who has escaped from prison to exact revenge. Until, that is, Shifu finds out what motivates Po more than anything else: food.

Though the premise appears, at best, highly unlikely, Osborne said he and his co-director, John Stevenson, wanted to make sure inaccuracies were confined to the storyline. Everything from which animals were chosen for the Furious Five to which martial arts moves they would use was chosen with precision and care.

Po’s heroes—Tigress (Angelina Jolie), Crane (David Cross), Mantis (Seth Rogen), Viper (Lucy Liu) and Monkey (Jackie Chan)—are all based on the Shaolin Kung Fu style, and their quick moves were chosen after the animators all took part in a kung fu course. Even what names were given and their pronunciations were carefully executed—with a few adjustments here and there, including Master Shifu’s cognomen, which translates to ‘Master Master’ in Chinese. And that’s not the red panda’s only problem.

“You should pronounce it ‘sure-fu’, and to our ear, it sounded like ‘seafood’,” Osborne said. They ended up calling him ‘Shee-fu’.

Likewise, Oogway’s name, which means ‘tortoise’ and is pronounced ‘Wu-gui’ in Chinese, is pronounced exactly as it’s spelled in the movie—with an ‘oog.’ For the most part, however, the filmmakers remained true to the Chinese culture they were attempting to homage to. “Kung Fu Panda” even opens with a two-dimensional animated dream sequence that resembles Chinese shadow puppetry.

And Chinese audiences are taking note. “It’s hard to believe that this was filmed by Americans,” one Chinese person noted on a message board. “Not only does it have Chinese symbols, but Chinese culture and philosophy are also on display in the film. Even many of the directors in China can’t fully understand Chinese culture in depth, but it is an American director who has done so in this film.”

Their accuracy and attention to detail was carefully executed, even if it meant sacrificing a laugh line or two, Osborne said.

Inspired by many of the filmmakers’ favorite kung fu films, including Project Day Part II, Crouching Tiger, Hidden Dragon and House of Flying Daggers, the film was a “passion project,” Osborne said. It was, in part, because of their infatuation that they knew how important accuracy was, despite the film’s medium. Osborne said he drew upon his experience as a director of the animated series “SpongeBob SquarePants” and Academy Award-nominated short film “More.”

“An animated world needs to have authenticity in order to engage the viewer emotionally in the characters,” Osborne said. “You have to create a world that is grounded and very realistic on some level because it’s all fake.

“If we were going to go through the trouble of creating that world, we figured, why not go the extra mile and make sure it’s actually authentic and true to the source? And it became a very key part of the project, was to be as true as possible—not only to the cultural aspects, but also the philosophical and even spiritual aspects that were so inspiring to us.”

Chinese culture was infused in each element of filming, even in some of its more literal forms. Osborne said he especially found inspiration in a Daodejing (Tao Te Ching) stanza the filmmakers discovered during the filming the movie: ‘The sapling that bends in the breeze is greater than the mighty oak that is rigid…The hard and strong will fall. The soft and weak will overcome.’

“All of the sudden, we said, ‘Wait, wait. This is right. We’re on the right path here,’ and we began to embrace the fact that Po could win by being soft and weak,” Osborne said. “All we had to do was pay attention to the stuff that was already there because there is such a rich history to the culture, and we wanted to embrace that rather than be in conflict with it.”

The director argues that even the concept of a kung fu-ing panda fits within Chinese tradition..

“The idea of yin and yang was a very important philosophical idea that we wanted to embrace as well. That’s yin and yang right there: kung fu and a panda,” Osborne said. “You couldn’t have two things that were farther away from each other. So for us to find a way to make that harmonious, to find a way to have those two things fit together, would embody the spirit of yin and yang and would actually embody the spirit of the potential in that title—‘Kung Fu Panda’—that makes people giggle.”

The filmmakers’ attempts to pay homage and be accurate to Chinese culture, however, didn’t prevent them from making a movie anyone can empathize with, Osborne said, using a scene in which Po finally tells his father he doesn’t want to run a noodle shop as an example.

“I think that’s something a lot of people can relate to in one way or another,” Osborne said. “That’s the thing: we were looking to tap into things that were really universal and not necessarily one culture or another. Because we’re all human beings, and there are certain universal truths and archetypical elements that we can relate to.”

And audiences worldwide seem to agree. The movie has already made about $230 million and cost about $130 million to make. Jeffrey Katzenberg, one of the co-founders of DreamWorks, has already announced his plans to make a franchise out of “Kung Fu Panda” based on its initial success, one that may or may not have had something to do with its serendipitous release date almost two months to the day before the Beijing Olympics begin.

The filmmakers didn’t realize until halfway through production, which officially started mid-September 2005, that the Olympics would coincide with their anticipated summer movie season. It was then, Osborne said without any irony, that they realized Master Oogway was right: there are no accidents.

No accident that Po, who describes himself as “the big, fat panda,” finally found his way out of the DreamWorks development studio after at least fifteen years and is expected to earn hundreds of millions of dollars worldwide.

Well, not Po himself, anyway. As he so modestly describes in a dream sequence on himself, “There is no charge for awesomeness—or attractiveness.”

Nancy Chen is a junior majoring in International Relations at the University of Southern California.