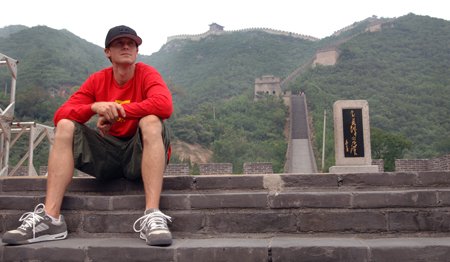 As extreme sports emerge in China, skateboarding leads the way.

Forget soybeans, aircrafts, and pharmaceuticals. Popular culture is America’s most influential export. However, with the careful level of scrutiny on all Western products entering China’s borders, what are the prospects for skateboarding in China?

After all, in America, skateboarding was once stigmatized for its rebellious edge. Fears that skateboarding was linked to illegal drug use, anti-establishment attitudes, and a disregard for public property caused commentators and parents across America to fret. But in China, skateboarding seems to have earned the government’s stamp of approval.

Twenty years ago, the notion of a Caucasian man jumping over the Great Wall of China on a skateboard might have offended Chinese sensibilities. The symbolism of an American leaping across this historical symbol of China’s defense could have been perceived as an insult to national pride. However in 2005, Danny Way, an American professional skateboarder, encountered a surprisingly accommodating government.

Before his trip to Beijing, Way had set world records for both skateboard jumping distance (24 meters) and height (7.14 meters). On July 9, 2005, Way made history by becoming the first person to leap the Great Wall without motorized assistance.

“I’m honored to have my visions embraced by the people of China,” Way said. “Skateboarding has yet to realize its full potential, and by bringing this event to the people of China and the rest of the world, I hope I’ve contributed to the future of skateboarding and helped bring my sport the global attention it deserves.”

Pioneers such as Way have brought global attention to China’s developing extreme sports scene, but Way is not the only one setting world records. Within the same year, SMP International, an Australian-owned skateboarding company, finished construction on the world’s largest skatepark, located in New Jiangwan City outside Shanghai. More than 12,000 square meters in size, the park features the world’s biggest vert ramp, the world’s largest concrete skate bowl, and a 5,000-seat stadium. 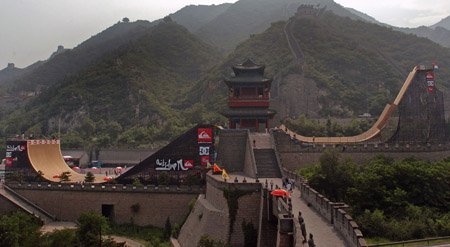 “We want it to be amazing…” said Darren White, the park’s chief designer, “not just the biggest [skatepark in the world], but the craziest as well.”

Each year, the SMP Skatepark hosts a competition called Shanghai Showdown, attracting athletes from all across China and even from the West.

However, before SMP and Danny Way entered China, the skateboarding landscape was much different.

“It kind of reminded me of skateboarding in the States, during the early ‘90s, when there weren’t that many kids who were into it,” said Raph Cooper, creator of She Hui (Society) Skateboards, the first domestic Chinese skateboarding company. “When I first went to China in 2000, buying a skateboard was kind of like buying drugs. You had to call a guy who knew a guy and meet at the corner of the street with cash.”

Although there was already a small community of people who were skateboarding at the time, the means for distribution had not yet developed into a real market.

“[Before the SMP Skatepark in Shanghai], no one had really even heard of skateboarding there… like it didn’t exist,” White said. Cooper, however, is aiming to change that.

In 2000, as a USC undergraduate student, Cooper spent a semester studying abroad in Beijing University, an experience that would change his life. “When I was in Beijing, I kept thinking about what I could do in China to bring me back here, and starting a skate shop was one of them.” Cooper said.

After graduating, Cooper went to Beijing to turn his vision into a reality. Skateboarding seemed like a natural fit for the Chinese market. “Half the skateboards in the world are made in China, so it didn’t make sense that Chinese skaters had to buy imported boards,” Cooper said. “So we decided to make boards here and sell them at a cheaper price than American boards so that more Chinese people could start skating.”

Since then, a new generation of Chinese youth have embraced the skater lifestyle and She Hui has become one of the most respected names in the country’s developing extreme sports scene.

The introduction of domestic skateboarding companies has been very important in launching the careers of aspiring Chinese skateboarders. This is especially true for Xu Ying, a 24-year-old skater from Beijing.

“I was interested in skateboarding since I was in primary school, but I wasn’t able to start early on because getting board was far too expensive,” Xu said, “It would have cost my parents an entire month’s salary to just to buy one.”

But in 2001, Xu was finally able to afford a domestic-made board from his friends’ new skate shop in Beijing, and has never stopped skating since.

“Skating has changed my life.” Xu said, “It’s expanded my horizons, taken me to places across China, connected me with people from all around the world, and it’s helped me to understand myself much better.”

However, starting an independent company in China still proved to be a struggle. Start-up companies face high government taxes and a long list of bureaucratic procedures. “I wouldn’t imagine starting up any company in China would be easy,” Cooper said, “and you’re not going to make a lot of money selling skateboards.”

Another challenge for the industry is the fluctuation in the popularity of skateboarding. “The skate scene has been growing, but it comes in waves and goes up and down,” Cooper said. China is beginning to exhibit a similar pattern to what was seen in the skate scene in America, which has had highs and lows in popularity since the Dogtown craze during the mid-‘70s.

“There is this 10-year fluctuation of popularity where everybody thinks that skateboarding is the coolest thing in the world and then they forget about it for awhile and then it comes flying back up again,” Cooper said. “So I think it’s sort of part of the natural fluctuation of skateboarding as a whole.”

Since 2000, skateboarding has been riding a wave of international popularity. Throughout the decade, skate culture has had great success in television shows, such as Life of Ryan and Rob & Big, as well as video game franchises, such as the Tony Hawk’s Pro Skater series.

ESPN, which initiated the X Games in 1995 as the first annual tournament for extreme sports, has played a significant part in bringing skateboarding out of the underground and into the mainstream world of professional sports.

The new attitude and respect given to extreme sports as well as the success of the X Games led ESPN to internationalize the competition in 1998 by hosting the first international qualifier, the Asian X Games, to scout the new talent that was coming out of Asia. Since then, the level of competition has been rising steadily in East Asia, with athletes from Japan, Thailand, and Malaysia achieving global acclaim.

Although the Games are usually held in Southeast Asia, last summer, Shanghai became the first Chinese city to host the competition.

“Skateboarding, and action sports in general, isn’t purely an American activity,” said Jeremy Hale, the Asia Pacific Sales Director for DC Shoes. “There are many talented riders, inspirations and influences coming from right around the world, including China.”

Although China still lags behind some of its Asian neighbors in terms of producing experienced and renowned skateboarders, Cooper sees a great deal of potential in China’s skate scene. “If we can keep it hyped up in China, if we can keep the business going well enough to be able to feed the scene for competitions or for demos, then we could really see China putting a big impact on skating as whole,” he said.

A small number of Chinese companies are competing with Cooper’s She Hui Skateboards to build up their own share in this potentially huge market. One of the biggest names in the domestic market is the Shanghai-based skateboard manufacturer Gift and its retailer, Fly.

Larger international brands such as DC Shoes have shown their support for the growing skate community in China without discouraging or undercutting the successes of small businesses.

“Our motivation and reason for being in China is simple—there are skateboarders and action sports inspired people worldwide who love what we do and want to support what we do,” Hale said. “So it’s simple; we will support them back.” DC, Quicksilver, and domestic Chinese skateboard companies often host events and tours together.

American firms in China generally have to protect their products from cheap knockoffs, and skateboarding companies are no exception. “The largest competitor in China [is] counterfeit [goods],” Hale said. As skateboarding fashion has grown in popularity, the number of counterfeit skate shoes with the DC logo has as well. But Hale remains confident about the future of legitimate skate products. “When we spread the word that our shoes and technical apparel perform better and last longer, people generally understand why we do what we do,” he said. “Authentic is becoming more and more popular in China.”

Skateboarding remains a curious corner within the rapidly expanding Chinese economy. For independent skateboard companies like Cooper’s, it is less motivated by money and more about passion.

“It’s been a long and bumpy ride but it’s been fun, and it’s definitely rewarding when I look back on the last few years,” Cooper said.

Jonathan Chow is a junior majoring in International Relations at the University of Southern California.