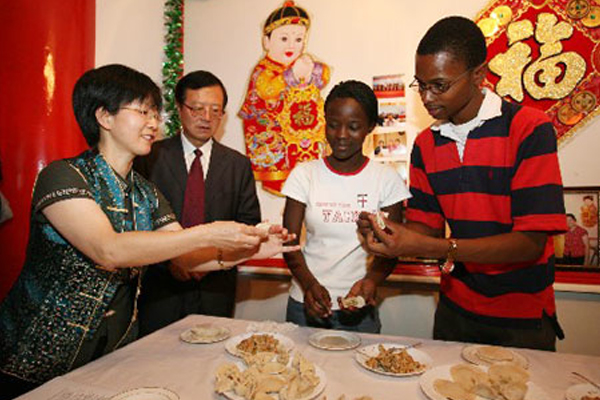 China’s development projects in Africa reach from Morocco to South Africa. From soccer stadiums to TV stations and oil rigs, should the world be on watch?

There’s not a lot on television in Kenya. Only eight stations broadcast from inside the country, so nightly news options are limited. Choose from state-run KBC, independent KTN, and of course…CCTV.

“I was in Kenya about two years ago, and on terrestrial VHF broadcast television is CCTV-9 (China Central Television) over the air in English!” said Adam Clayton Powell III, Vice Provost for Globalization at the University of Southern California. “I said wait a minute, this is amazing. The BBC wasn’t there, the U.S. certainly wasn’t there, but the Chinese were there on television.”

Powell, a long-time observer of the China-Africa relationship, was astounded by the sheer visibility of China on the continent.  From television broadcasts to cultural projects, China’s presence in Africa has been rapidly increasing.

“They are putting in Confucius institutes, where the Chinese are paying for the study of Mandarin, the study of Chinese culture and history,” Powell said. “Just as the French have their programs, the British have the British Council, the U.S. has American libraries, the Chinese are putting in their culture and educational outreach in a very significant way.”

Chinese language and culture is also receiving much interest from African universities.  There are now sixteen Confucius Institutes across Africa with Mandarin Chinese an increasingly popular foreign language among college students. In 2007, BBC News reported on a Mandarin language competition among students at Khartoum University in Sudan’s capital city. China’s Ministry of Education reported that 3,737 African students came to China for study in 2006, up from just 2,757 in 2005.

There are also an increasing number of Chinese tourists in Africa. In 2005 alone, 110,000 Chinese tourists visited Africa, compared to only 50,000 in 2004. With the South Africa World Cup approaching in 2010, Chinese tourism is expected to grow rapidly.

Yet China’s involvement in Africa has not been so rosy in the eyes of some international observers. While some see opportunity, others see exploitation. In order to sustain its staggering domestic growth figures, the country has pushed further into Africa in search of energy resources and increased trade. It is not the drive for economic sustainability, however, that troubles politicians abroad. The sheer extent of China’s developments on the continent suggests to some that a grand strategy may be the driving force behind the Asian nation’s Africa push.

One of China’s greatest development strengths has been its penchant for investing in a very diverse range of global markets. From the developed economies of the West to developing nations in Africa and Latin America, China is there. Yet the country’s approach to relations with several African governments has been watched by the international community with concern. With a humanitarian crisis raging on in Darfur and Zimbabwean politics in upheaval, the country’s relationship with some questionable African governments remains a heated subject.

“It is in China’s interest to demonstrate to the international community that its policies in Africa are not driven solely by the desire to secure natural resources and access to markets and access to major infrastructure projects, and that the Chinese government is committed to improving the long-term welfare of people across the continent,” said then Deputy Asst. Secretaries Thomas J. Christensen and James Swan, East Asian & Pacific Affairs and African Affairs respectively, in a June 2008 statement before the Senate Foreign Relations Committee. Both men emphasized that China must take a more active stance in explaining its goals for African engagement.

While China is often portrayed as an oil-thirsty giant caring more about pipelines than people, the country’s involvement in Africa is not so cut and dry. While Christensen and Swan noted China’s strategic aims in Africa, the two shed light on the actual figures surrounding China’s energy projects on the continent. 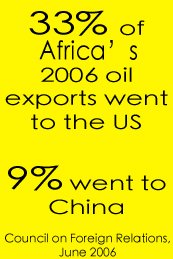 “Contrary to what many assume, China’s large oil companies are not dominant players in Africa’s energy industry. With the important exception of Sudan, where the China National Petroleum Company (CNPC) is the major operator, Chinese oil companies are relatively minor players in Africa,” the diplomats stated. “In 2006, total output by all Chinese producers was approximately one-third of a single U.S. firm’s (ExxonMobil) African production. Some energy assets now held by Chinese companies were in the past run by international oil companies that found more profitable opportunities elsewhere in Africa.”

Nevertheless, trade is growing exponentially. Total trade between China and Africa reached US$107 billion in 2008, a 45% jump since the previous year. There are now over 800 different Chinese enterprises doing business in Africa. The Southern African reported in January 2009 that Angola recently became China’s largest African trader, with total volume exceeding US$25 billion. With China’s continued drive for natural resources and Africa’s need for infrastructure development, the relationship appears to be a match made in economic heaven.

Carine Kiala, a Senior Analyst for the Centre for Chinese Studies at Stellenbosh University in South Africa, said that in general, “Certain African governments are receiving credit lines and services in exchange for their natural commodities. How this benefits the general population is subject to interpretation.”

Oil is just one of the critically important resources concentrated in Africa. The abundance of natural resources other than oil makes Africa an even more attractive hot spot for Chinese investment.

The Chinese have become creative in working with African states whose heavy indebtedness makes it difficult for them to get construction loans. China Exim Bank permits such nations to use natural resources to pay for infrastructural development.

Kiala said that the infrastructure projects undertaken jointly by China and the local governments are having a highly visible impact on African societies.

“Most certainly, the infrastructure being put in place will solidify internal and regional linkages, thus facilitating trade and empowering the masses,” Kiala said. “Although job-creation is a direct benefit, African countries need sustainable employment and skills development.” A lack of capacity building – the development of the domestic population’s capabilities as a work force – has been one charge against China’s “resources for infrastructure” trade strategy. 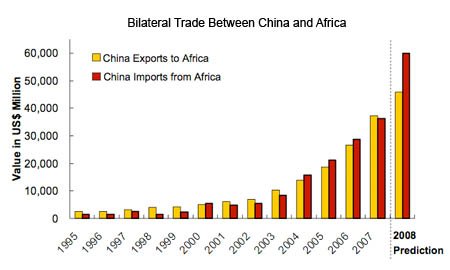 Besides cultural exchanges and industrial development, China has also played an active role in providing aid for poverty-stricken African countries. In late 2006, President Hu Jintao pledged to provide African countries with US$5 billion in aid including soft loans and credits over the next few years. With this pledge China hoped to bolster trade between the two regions. Others, however, see more harm than good in China’s aid packages. In early 2007, the British government warned Beijingthat their assistance agreements and inexpensive loans threaten to drive countries back into debt after just recently beginning to realize the benefits of other debt relief programs.

In discussions with African governments, Chinese officials emphasize the country’s long-term commitment to the relationship. Given the region’s colonial past, several African nations see this as a refreshing change. Furthermore, China’s “hands-off” approach in political affairs is a business advantage. Unlike its Western competitors, the Chinese government has chosen to keep political matters completely separate from business engagements. 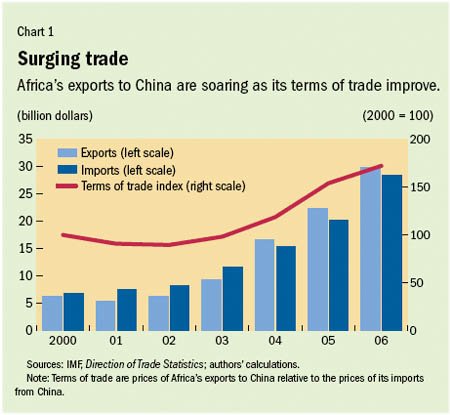 Chris Burke, a research fellow with the Centre of Chinese Studies at Stellenbosch University, said that these distinct patterns of trade and exchange between Beijing and African nations have fostered a relationship focused on the future.

“There are some unique features to a Chinese engagement with the continent, with generally a long-term perspective,” Burke explained. 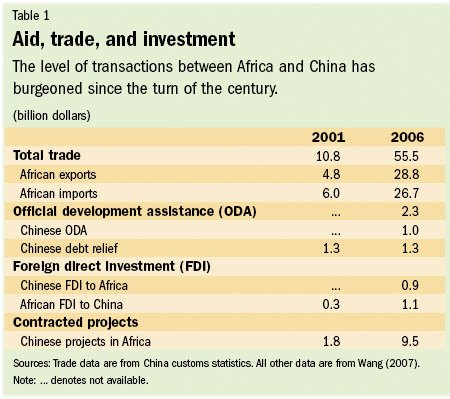 Over the past decade, Chinese companies have increasingly taken on rather large-scale projects in several African nations. In Tanzania, for example, China is supplying half the funds for a US$56 million project to build a much-awaited national stadium. The stadium will hold 60,000 people and will be constructed by a Chinese construction company. The current Tanzanian national stadium can only hold 25,000 people and is in desperate need of repairs.

On a grand scale, as China’s trade relationship with Africa has flourished, investments have been spread throughout Africa’s 47 nations in a diverse mix of industries.

“The Chinese presence is not uniform across the continent,” Kiala said. “In South Africa, for instance, the Chinese have invested heavily in the ICT sector and most recently in the vehicle retail sector.”

Joshua Eisenman, a UCLA political science doctoral student, thinks that the Chinese are making a genuine attempt in developing a workable and mutual Sino-African relationship.

“The Africans need infrastructure and the Chinese are building it,” Eisenman said. “The Chinese have shown an effort to cultivate this relationship and reassure the Africans that they are not going to step in there and manipulate and put conditions on things. That is reassuring to them.”

Billy Noiman is a senior East Asian Languages & Cultures student at the University of Southern California.