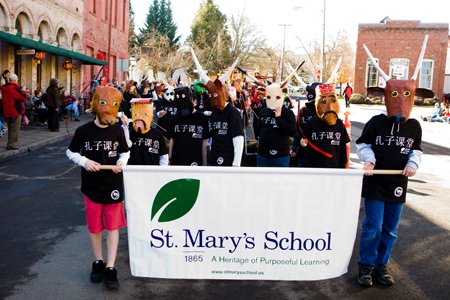 Confucius Classroom, a program from the Chinese government aimed at teaching high school students Chinese culture and language, is expanding rapidly around the world.

At first glance, St. Mary’s School in Medford, a southern Oregon city with a population that’s only about one percent Asian, seems an unlikely hotspot for Chinese cultural and language education. And that’s exactly what the Chinese government is counting on.

China’s efforts to expand economically and politically and to better its image have been closely scrutinized over the past few years; the Olympics last August, the growing Chinese movie industry and endless newspaper headlines worldwide documenting China’s growth have helped usher in what many have called a new era in international relations. Economic success is often closely followed by cultural expansion, and China is no exception.

Beijing is also turning its attention to the next generation of American businessmen, politicians and other leaders, starting early—in high school and college, to be exact. The aim is to provide Chinese language and culture instruction worldwide, with a special effort to reach rural areas where such instruction is less common.

St. Mary’s, a private Catholic school with 400 junior high and high school students, was the first recipient in the Americas to receive a $50,000 grant from the Chinese Ministry of Education last August. They have since received $250,000 to cover, among other expenses, the stipends of both of their Chinese language instructors as well as community outreach programs. In addition to language and cultural education at St. Mary’s, the five-year-old program also offers adult language classes open to the community,  weekly Chinese instruction in elementary schools, and subsidized travel opportunities for students.

More than 350 Confucius Classrooms and Institutes have been established worldwide since 2004 with the aim of making Chinese language instruction available to high school and university students worldwide. Confucius Classrooms have opened in Scotland and Australia, and Central Carolina Community College in North Carolina will be the first community college in the United States to establish one later this year, aimed at high school and college students, businesspeople and the general public.

There are only a handful of Chinese Classrooms established in the United States so far, but so far about 60 schools have applied for support. Prestigious private schools such as the Hotchkiss School in Connecticut, Boston College High School and the Dalton School in Manhattan are among those which have applied for the program, according to Frank Phillips, the St. Mary’s headmaster.

The program’s administrators at Hanban, the Chinese government office with the mission of promoting the study of Chinese language and culture, say they try to make each Confucius Classroom is just as different from the next.

Eighty students are enrolled in St. Mary’s school Confucius Classroom program, but the curriculum doesn’t just stay inside the school’s classrooms. For example, it includes providing medical specialists from Henan University for an upcoming local medical conference The Chinese specialists, whose expenses will be split by Hanban and St. Mary’s, will educate physicians on the use of traditional Chinese medicine, including how it can be applied to the treatment of AIDS.

Phillips said the overall costs for the Confucius Classroom program itself are evenly divided between Hanban and St. Mary’s, a typical arrangement for Confucius Classrooms. St. Mary’s sends a budget proposal including a list of ideas of how they can expand in the community and Hanban has yet to reject any of their applications.

Philips said he has not run into any conflicts over the curriculum with Hanban. “Hanban has a very light hand,” he said.

Professional ambitions as well as personal curiosity have contributed to the popularity of the program at St. Mary’s.

“Regardless of any profession, [Mandarin] is going to be a very important language to learn,” said Franny Aliattraih, a student at St. Mary’s enrolled in the program.

“We’re not pursuing Chinese as a market language for the kids,” he said. “We’re also projecting Chinese culture and history into our social studies curriculum.”

The program, in fact, has proven to be so popular Phillips says the school’s other language courses have felt an adverse effect.

“The big problem is what does it do to the other languages,” he said. “Chinese is a hot language now…Our Latin class is losing enrollment, and Chinese is giving Spanish a run for its money right now.”

Some students say they are eager to learn about a different culture and language, but for at least one student, the program affords her a chance to learn about her own heritage.

“I never really understood a whole great deal before taking a class in Confucius Classroom,” said Dana Feng, a senior enrolled in the program. Feng, a Chinese American born in the U.S., recalled being unprepared during a trip to Hong Kong but says she is looking forward to her next trip.

“After studying [in Confucius Classroom], I really hope I could go back again,” she said. “Learning the language has really inspired me to want to go back and pursue the language more.”

Since then, 328 Confucius Institutes have opened in 82 countries, including Armenia, Cuba, Iran, Poland, Kenya and the United States. Hanban’s initial public plans called for 100 Institutes, but with the success of the program, the Hanban now hopes to set up 500 Institutes worldwide by 2010 and estimates there will be approximately 100 million non-Chinese worldwide learning the language. With an aim to set up a thousand Institutes by 2020, Beijing is also hoping to combat stereotypes with its cultural education.

The Classroom program was established partly in response to the Institutes’ popularity; the first one opened in February 2008 in Vienna, Austria. Confucius Classrooms are founded in areas that typically do not have much exposure to Chinese culture, unlike Confucius Institutes, which are usually set up in universities with already well-established Chinese language programs.

“Learning the language of a country is very important to forming friendship,” Xia Yun, St. Mary’s Chinese-language instructor, said. “I came to the U.S. in 2004 and was surprised at how little common Americans knew about China.”

“Their image of China was from movies and how American movies portrayed China, which was not truly objective. I think in order to eliminate such misunderstanding, the most useful way is to learn the Chinese language. If they know the Chinese language, they would want to go to China on their own and find out what China is really like.”

According to Zhao of the Hanban, schools usually make the first approach. St. Mary’s, for example, contacted Hanban in 2007 and received a grant because of their then-two-year-old Chinese language program for grades six through 12.

Challenges have risen as a result of the programs as well; the establishment of a Confucius Classroom at St. Mary’s, an independent Roman Catholic school, initially drew controversy in the community.

Zhao said that a few people initially thought of Confucius as a religious leader and Confucius Classroom as a center to preach a Chinese religion, not as an educational institute to introduce Chinese language and cultures. The responsibility lies with local staffs, he said, which must clarify the mission of our institute to the local community.

Philips said he hasn’t received any complaints about the program since last year.

“I had a few dubious parents who were stuck in the Cold War who questioned whether it was a propaganda initiative,” he said.

Since then, however, both Phillips and Xia say the situation has been resolved.

He said he hasn’t heard much criticism since starting a public-outreach initiative to educated the community as well as parents about the program.

“I’ve been doing some public speaking and we’ve hosted an evening to explain the program’s purpose,” Phillips said. “The overwhelming response was, ‘How do I sign up for Chinese?’”

The program has even created advocates in the community, Xia said.

“The misunderstanding soon disappeared and the influential persons in the local communities are very supportive by donating money, telling their friends and partners about it,” Xia said. “They will be willing to start more programs, projects related to the Confucius Classroom in the future.”

“In other words, China wants the world to have positive feelings toward China and things Chinese,” the report said. “For China to achieve its goals, people must admire China to some degree.”

China is not the only country aiming to promoting this; the United States also has its own programs dedicated to teaching Chinese language and culture, viewing it as a national security priority. The U.S. Department of State, for example, provides scholarships for students to learn “less commonly taught languages”—including Chinese—through its National Security Language Initiative for Youth.

The lesson plans of Confucius Classrooms, however, largely remain independent of Beijing’s intervention, the Hanban director Zhao said. He, however, also ties the mission of the programs to Confucius himself.

“Confucius is regarded as a prominent pedagogue in human history and he spent decades travelling around the country to propagate his philosophy and enlighten more people,” Zhao said. “This, in our opinion, perfectly fits the mission of Confucius Classroom—to teach the Chinese language and promote its cultures outside China.”

The effects of teaching a language and culture to students don’t just stay in the classroom, one expert said.

“Like what the Olympics have done…it helps to broaden the conversation, the discourse about China in the U.S.,” Jian Wang, a professor of public relations at the University of Southern California, said. “All those things are much broader than just offering classes to young people.”

Nancy Chen is the co-managing editor of US-China Today and a rising senior studying international relations at the University of Southern California.

Ethan Yi is studying for his Master’s degree in East Asian Languages and Culture at the University of Southern California.