The Controversial Story of the ‘Hermit of Peking’

Long misunderstood and misrepresented, the life of an early 20th century Sinologist and polyglot is given some clarity with a recent publication of the man’s memoirs.

He was a gay Englishman who used connections to China’s imperial palace in the late 1800s to enter the House of Chaste Pleasures, an exclusive male brothel in Peking. He also claimed he was the lover of the infamous Empress Dowager Cixi.

His name was Sir Edmund Backhouse.

His reputation took a beating in Hugh Trevor-Roper’s 1970’s biography, Hermit of Peking, in which Backhouse’s work on China was dismissed as “a pornographic novelette.” Meanwhile, Backhouse’s original memoir, Décadence Mandchoue, sat in obscurity in the Bodleian Library at Oxford University. Only now has the memoir itself been published. The story it tells, and the story of how Derek Sandhaus—Chief Editor of Earnshaw Books—brought it to life is a remarkable one.

Edmund Backhouse was respected during his life as a Sinologist who wrote books that helped shape Western views of the Qing Dynasty. After arriving in Beijing in 1898, he worked as a translator and researcher for the Times of London. An exceptionally gifted linguist, Backhouse was fluent in English, French, Latin, Greek, Japanese, Russian, Chinese and several colloquial Chinese dialects. His memoir reflects his linguistic abilities, as he constantly slips in well-known Chinese, French and Latin phrases, and at the same time, makes reference to classics from different cultures, including Shakespeare, Dreams of the Red Chamber (红楼梦), Homer and Greek mythology. But it was his sexual activities—recounted in graphic, explicit detail—that have made the publication of his story so controversial.

This spring, Backhouse’s memoir was published in English and translated into Chinese. The book, Décadence Mandchoue, is being distributed in Hong Kong. Due to its numerous sex scenes, the publishers chose not to distribute it in mainland China.

“They [the Chinese authorities] would let us publish only if we took out the sex part, but that’s one third of the book,” Sandhaus said. 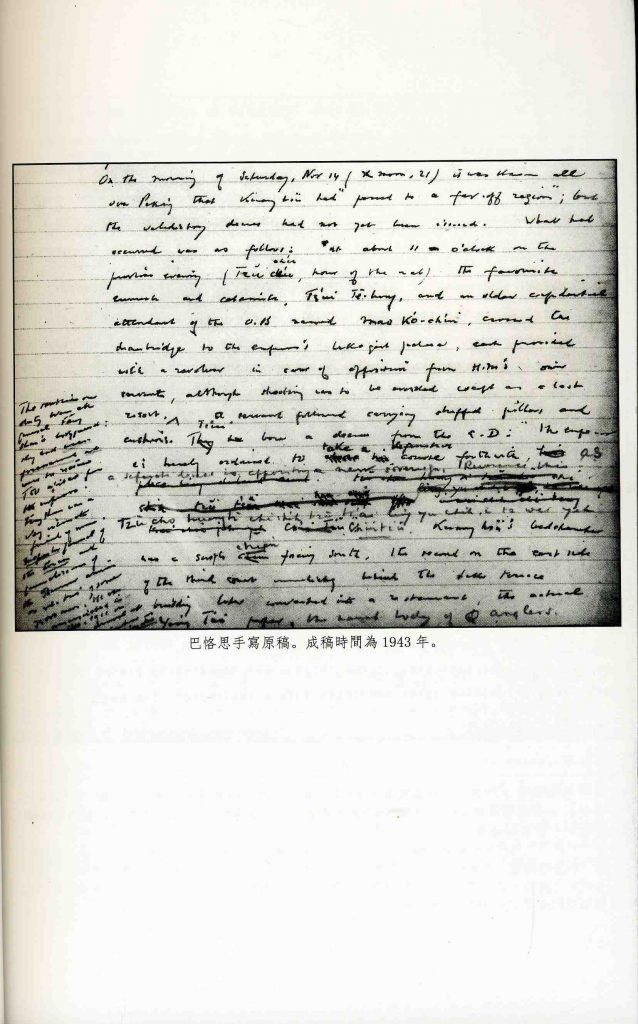 Reluctant to deal with censorship issues, Bao Pu, head of New Era Press and publisher of the Chinese edition, chose Hong Kong for the release. “If people in mainland like it,” he noted, “they’ll somehow find a way to get a copy.”

According to official documents at the time, both Guang Xu and Cixi died from natural causes, yet the story has its skeptics. A popular explanation is that the Emperor was poisoned on the instructions of Cixi, while she herself died of diarrhea. However, in Backhouse’s account, two eunuchs using pillows and cushions suffocated Guang Xu on the orders of Cixi, while the Empress Dowager was shot by Yuan Shikai—who later proclaimed himself emperor—for refusing to abdicate. Although Backhouse himself did not witness these events, he claimed he was given the details by eunuch Li Lianying, Cixi’spersonal servant. 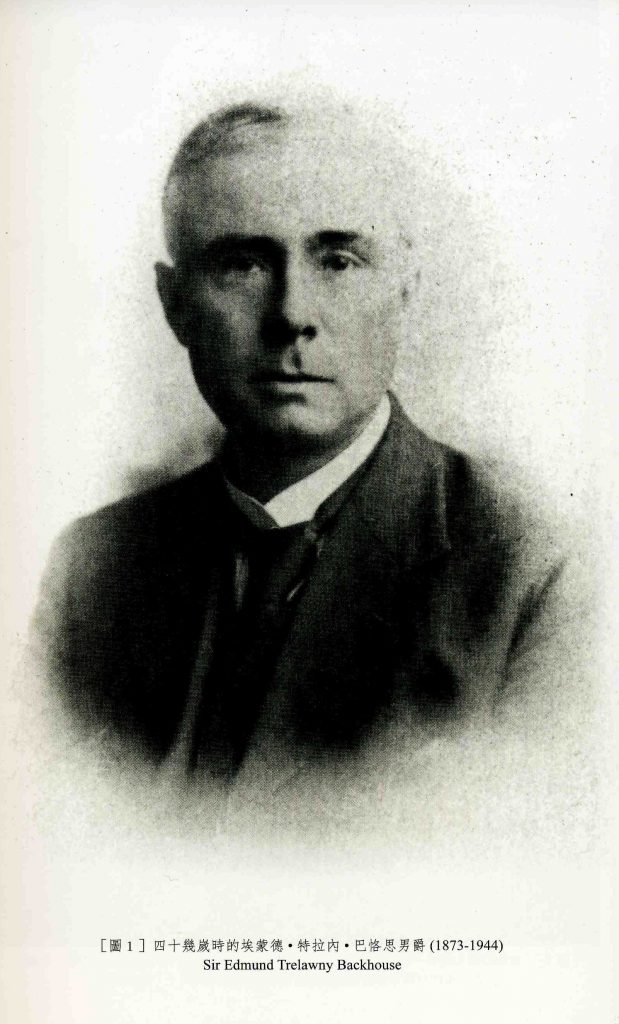 Before Décadence Mandchoue was published, it went through a painstaking translation process. The editors had to trace back the origins of the many obscure references he used, and as a result, the book has numerous, detailed footnotes.

Maggie Wang Xiaoge, a Chinese novelist, did the Chinese translation. Her colleagues describe her as the “heroine” of the project for her skill, especially in dealing with Backhouse’s many references to classical literature, as well as his blatant pornography.

“I feel very small before Backhouse,” Wang said. “Translating this book was no easy job.” Despite the challenges, Wang managed to take poetry and literary phrases from Backhouse’s original English and retain their original meaning in her Chinese version.

Backhouse wrote Décadence Mandchoue when he was 71, seven months before he died in Beijing in 1944. His stories would have disappeared with him had it not been for his Swiss physician, Dr. Reinhard Hoeppli, who persuaded Backhouse to write down his life story.

After Hoeppli’s death in 1973, the manuscript was given to British historian Trevor-Roper, who decided to write his biography, Hermit of Peking. In the book, Trevor-Roper portrayed Backhouse as a sexually frustrated homosexual and accused him of fraud and forgery. The book destroyed Backhouse’s reputation, and obscured his descriptions and insights of old Beijing.

“Roper wasn’t at all fair to Backhouse,” said Graham Earnshaw, publisher of the English version.

Sandhaus notes that the negative conclusions in Trevor-Roper’s book about Backhouse, and the allegations that his memoir was pornographic nonsense with no historical value, were drawn without consulting other historians or referring to Backhouse’s own previous publications.

Sandhaus acknowledges that there are inconsistencies in Backhouse’s story. He attributes, however, some mistakes to errors in memory, as Backhouse was a sickly old man when he wrote Décadence. In his own comments, Hoeppli reached the same conclusion. 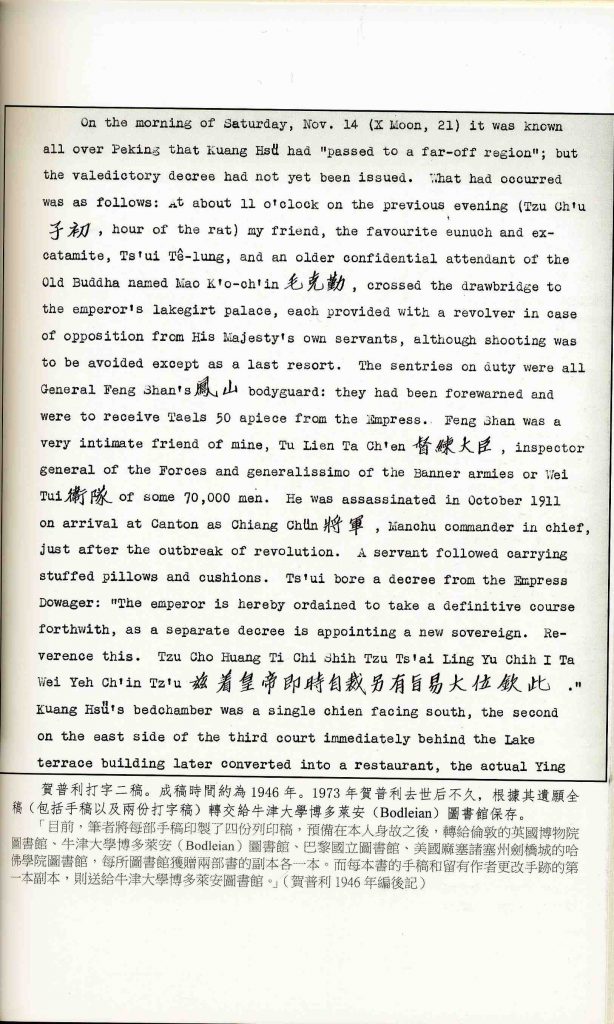 Strongly disagreeing with Trevor-Roper’s assessment, Sandhaus said that “you can’t say his stories are unreliable just because he was sometimes wrong or dishonest.”

“This book isn’t here to tell people to believe everything Backhouse said,” Earnshaw added. Instead, people should make their own judgments based on the author’s own words.

While the story’s historical accuracy remains a source of controversy, translator Wang, who spent two years trying to decipher Backhouse’s writings, sees him as a simpler character.

“He’s just an old man reminiscing about his past.” Wang observed, noting that Backhouse clearly misses a former companion and male prostitute, Cassis Flower, who he lost touch with after the brothel where Flower worked caught fire.

This book does not solve the many mysteries surrounding Backhouse. It does, however, allow readers to judge for themselves the story of a remarkable man and his times.

Jaqueline Png and Su Zhan are students in the Journalism program at the Chinese University of Hong Kong.