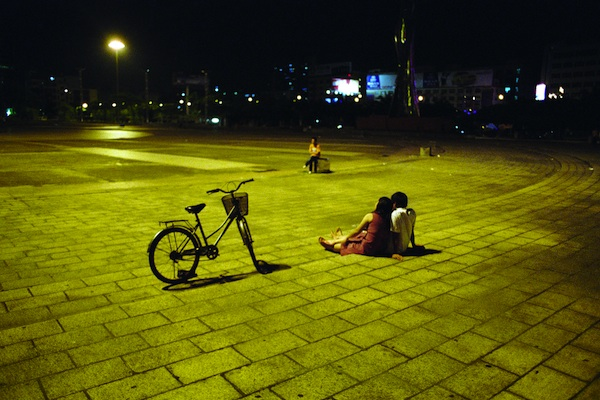 No Fish in the Sea? Dating in Modern China

When Christine Tan arrived in Shanghai, she was at once fascinated and puzzled by the city. While old streets were giving way to new skyscrapers, it was not the visual changes that caught her attention. Rather, she watched on as the increasingly international city absorbed new cultures and ideas into its already complex history. The observations inspired Tan to pen her experiences as a “not-quite-foreign foreigner” living in modern China in a blog, ShanghaiShiok.

And while there was much to write about, one topic in particular continued to drive readers to Tan’s site – love.

Singles complaining about the lack of suitable partners in the world is nothing new. But the confusion and frustration associated with dating in modern China is taking on a new form thanks to a combination of government policy and rapid societal change. A new generation with different expectations for love and romantic relationships has blossomed in China.

As Tan’s friends pine, a popular belief among China’s young people is that the one-child policy is the root of their loneliness. After the one-child policy was implemented in 1978 to curb a rapidly growing population, the majority of Chinese families were restricted to having only one child, bringing with it a series of social consequences.

Traditional culture favors male offspring due to their ability to pass on the family name and support parents in old age, leading some Chinese families to disown, or sometimes even abort, female births. The trend has been more divergent than expected, with the ratio of males to females at birth rising from 116.9 boys per 100 girls in 2000 to 118.1 boys per 100 girls in 2011, according to China’s 2010 census. The increasing gender gap has led some to speculate that Chinese women feel a new sense of empowerment when choosing potential partners, and consequently leading them to delay settling down with Chinese men. The further consequence is that Chinese men now harbor a greater anxiety that they will never find a wife.

“The daughters of the one child policy have no brothers to compete with and therefore, have experienced extraordinary amounts of empowerment compared to even their mothers,” explains Vanessa Fong, associate professor at Harvard University and author of the book Only Hope: Coming of Age Under China’s One Child Policy. “In fact, they are even slightly more likely than their male counterparts to get a higher education.”

As only-children, or “singletons” as Fong describes them, Chinese youth feel now more than ever the full weight of their family’s expectations in a filial and family-oriented community.

“These single children are their parent’s only hope financially and emotionally so the children experience a sense of shame if they fail,” Fong explains. “With a strong culture emphasizing filial devotion, what children owe their parents is sort of unquestioned. And they owe their parents a lot for how much Chinese parents tend to invest in their only child.”

Because Chinese singletons are competing exclusively with other singletons, the pressures of standing out and succeeding are at an ultimate high, and as a result, plans to start a family are often pushed aside for later, if that ever comes.

While Beijing’s policies play an obvious role in the gender imbalance, others see new approaches towards love in China as simply a result of changing times and globalization.

Song Bei Bei, a college student in Shenyang, explains that Chinese young people are becoming more worldly in their relationships. Interracial dating, while not without a certain stigma in Chinese society, is on the rise.

“With the globalization of China and foreign countries, the combination of Chinese and westerners are increasing,” Song says. “This trend is certain among international students.”

Bei Bei’s observations are not unfounded, since statistics from the Chinese Ministry of Civil Affairs states that in 2006, 68,000 mixed couples registered for marriage in China, 4,000 more than in 2005. In the U.S., Asian Americans as a racial group are the most likely to intermarry.

Many point to globalization as affecting more than just relationships, rather deeply changing common Chinese values and culture. The declining birth rate in China might be less policy-driven than initially suspected.

“China’s fertility rate is similar to that of developed countries,” Fong notes. “Most families have only one or two children in countries where they do not have policies similar to the one-child policy.” Fong notes that apartments with more than two bedrooms are becoming increasingly harder to find in cities like Shanghai and Beijing.

While policy and globalization shape society, it is easy to see that the traditional ways of dating have given way to a more modern approach in a significantly short amount of time.

“Aside from the internet playing a large part in dating, there have also been speed dating events appearing in major cities, and even a recent dating expo in Shanghai,” observes Sam Reeves, author of Chinese Dating Secrets Exposed. Such dating activities, although seemingly banal to many, offer a far more personal experience than parental matchmaking.

Among the more creative and daring dating techniques is dating classes. Professional “pick-up” artists in Beijing offer classes to men who have failed to secure a steady relationship. By paying either $150 each for a one-day seminar or $1,500 for a three-day course, single Chinese men receive the opportunity to learn the art of seduction by a teacher whose expertise was perfected by studying the best-selling American book, The Game: Penetrating the Secret Society of Pickup Artists.

Single Chinese women are not without options as well. For a fee of $3,080, women hoping to win the affections of affluent dates can attend classes at the Beijing Moral Education Center for Women, where students are taught certain techniques involving learning makeup tricks to spotting liars by observing facial expressions – all of which are believed to be qualities desired by millionaire bachelors. There are even millionaire matchmaking services that scout the ideal woman for men too busy to be bothered with the time-consuming task of dating.

Perhaps the most public method for meeting one’s significant other, dating shows on Chinese television now garner huge audiences. With the most popular shows attracting tens of millions of viewers, much of the country is tuning in to see the ups and downs of a new romance. Most programs revolve around a male contestant being scrutinized by roughly 25 women participants. If a male and female contestant harbor mutual feelings of attraction after a certain number of eliminations where the contestants ask each other their interests, backgrounds, and financial desires, the “winners” have the opportunity to walk hand-in-hand off stage, where they will be able to figure out the details of their upcoming trip to some romantic destination.

Yet while audiences tune in, such shows are drawing criticism from the public and government alike. Public debate over the ‘shallowness’ of modern Chinese culture erupted after Ma Nuo, a 22-year-old contestant on the popular dating show If You Are the One, scoffed at a male contestant’s offer to take her for a ride on his bike by saying, “I’d rather cry in a BMW car than laugh on the backseat of a bicycle.” Some point out that desperation in finding a spouse has driven men towards making themselves more desirable through wealth, while women, feeling desired, expect more out of their future husbands.

Tan agrees that she has seen a trend in superficiality in Chinese youth.

“Men are frustrated that they can’t get a woman to date them seriously without material security. Women are frustrated that men can’t obtain the necessary assets to secure them,” she explains. “Even if you don’t care about money and assets at the moment, your parents probably will. The link between dating, marriage and materialism is increasingly leading to pessimism and cynicism toward love.”
Tan notes the trend in eloquent fashion:

“It’s a dark period to be a Shanghainese youth in love.”

Changing, perhaps unrealistic, expectations are also cited as a primary reason for China’s increasing divorce rate. According to the Chinese Ministry of Civil Affairs, one in five Chinese marriages resulted in divorce in 2009. That is a far cry from the 0.4 divorces per thousand marriages in 1985.

The Chinese government has also stepped in to address public concerns over decaying morals and sensibility. After Ma Nuo’s controversial proclamation, the State Administration of Radio, Film and Television (SARFT) implemented new rules for dating shows. Inappropriate social values such as love for material wealth cannot be filmed. Also, shows are not allowed to hire “morally provocative” hosts and hostesses, while contestants are required to undergo stricter screening processes.

Even China’s state-run post office is making an attempt at reviving an appreciation for true and lasting love. Newlyweds in Beijing can now write sealed love letters to themselves and have them delivered seven years later on their wedding anniversary.

The hope is that couples contemplating divorce will receive a reminder of their true love for one another right when they are considering separation.

Connie Chen is a junior at the University of Southern California, studying International Relations/Global Business.