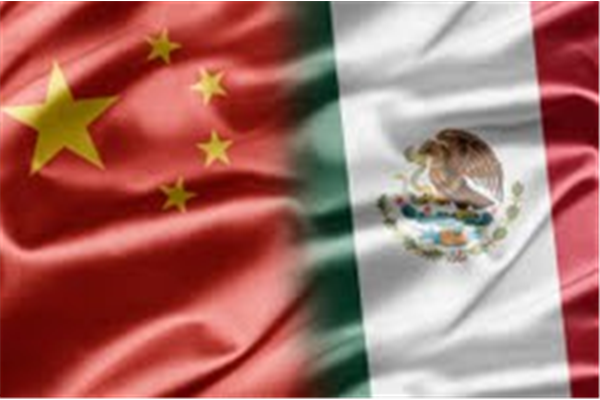 Guanxi and Amistad, Developments between China and Mexico墨西哥和中国的发展

Two global economic rivals and export powerhouses are beginning to shift their relationship from antagonism to symbiosis.

Mexico and China have begun a new era of opportunity in bilateral trade, investments and policies as they recognize the pronounced positive impact on one another. President Xi Jinping of China solidified efforts for a better relationship with his visit to Mexico last month to meet President Peña Nieto. The two reached an agreement, referred to as the “tequila pact”, which will boost higher Mexican exports into China.

“Mexico and China are two countries ascending in a new international order,” said Mr. Peña Nieto in a public statement as he welcomed President Xi.

Despite previous tensions over competition for export-manufacturing shares to the U.S., the evolution of China’s market to one that consumes voraciously coupled with higher labor and transportation costs have returned Mexico’s crown as the dominant exporter. The Boston Consulting Group (BCG) estimates that by 2015 the average total manufacturing costs in Mexico will be 6 percent lower than China’s.

“In general Latin America, and mainly Mexico, is widely ignorant of China and we are very ill prepared regarding China,” said Enrique Dussel Peters, Director of the Institute for China-Mexico Studies and professor at the Universidad Nacional Autónoma de México. “The ignorance is in the private sector with business chambers and public sectors. China’s become Mexico’s second largest trading partner and the share of trade between Mexico and the U.S. has fallen dramatically.”

Source: Data based on The China Analyst

While the two countries agree that bilateral trade is important, the current landscape shows that it is largely skewed. China has enjoyed a great trade surplus with Mexico as the Instituto Nacional de Estadística y Geográfia reported that Mexico imported close to $57 billion products while only exporting about $5.7 billion to China. New bilateral agreements, however, promise a better trade balance and industry growth opportunities for Mexico.

Industries in particular that were discussed and are expected to rise in productivity include:

Energy: Recent developments in Mexico regarding oil extraction to include higher foreign investment and privatization beyond Petroleos Mexicanos (Pemex) will be an area of interest for China’s Sinopec as Pemex has already increased its exports to China by 30,000 barrels a day since April.

With a recent report by OPEC indicating that China will replace the US as the world’s largest oil importer by 2014, Mexico will see a great potential as the seventh largest oil producer in the world, to continue increasing oil exports to China.

Clean energy efforts will grow in focus for both Mexico and China as both nations fight dangerous levels of pollution. With more sophisticated manufacturing abilities and larger fiscal means allocated to R&D, the two nations will find it beneficial to collaborate in technological advancements in this area.

Food: China has recently reduced its restrictions on Mexican products such as tequila and pork to increase imports. Currently Mexico exports only 410,250 liters of tequila to China while 165.7 million liters go to the U.S. Because the Chinese market is relatively untapped for tequila businesses, Mexican distillers are optimistic that demand will initially be high due to the alcohol’s novelty in the market.

Pork imports from Mexico into China were abruptly stopped in 2009 in an attempt to steer clear of the swine flu, according to the General Administration of Quality Supervision, Inspection and Quarantine in China. Trade doors for pork were reopened in 2012 and China expects import numbers from the western hemisphere to rise.

Infrastructure: Last month, Mexico and China signed a Memorandum of Understanding to promote infrastructure construction during President Xi’s visit to Mexico. Heightened infrastructure investments from China to Mexico will also bolster economic growth for the two nations and impact policies such as immigration.

Other areas of interest between the two countries included investing in education, mining, and technology. With plans to balance economic trade and promote cross-cultural exchanges, both countries expect warmer relations, productive outputs and higher levels of engagement.