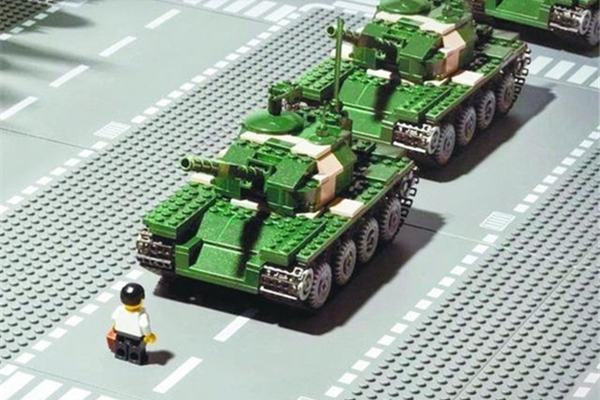 Memes vs Censors in China

Political memes are driving the Chinese government nuts, despite often going viral and entertaining the public.

The single party Chinese state is notorious for its strict censorship system and has directed considerable resources towards controlling online speech and expression. However, the infinite variations that can arise from a single meme have made some memes difficult to control and very pervasive.

“There’s a certain ironic paradox that China is not a democracy, but public opinion in some ways has more influence than it does in the United States, which is a democracy,” said USC political scientist Stanley Rosen.

Because of a gap in censorship enforcement, one that would excite even Bad Luck Brian, many Chinese have been able to express political discontent through doctored photos and inserted captions. The silliness and figurative nature of memes have made them hard to censor, making them a distinct category of online activism.

Most Chinese argue memes as pure entertainment, devoid of political content. They don’t see some memes as having subversive impact or even potential impact. One graduate student, Zhang Zhiyong, 27, told USCT, “I think the memes, like ‘Cǎo Ní Mǎ’, ‘Du Fu is Busy’, are the new way for young people to relieve their stress. It happens occasionally. It is just entertainment.”

The Chinese state, though, certainly sees memes as having corrosive potential and has censored some. For example, cao ni ma was censored at first, when cao ni ma was depicted in opposition to he xie.

Andersen Xia, a 21-year-old college senior in Beijing, believes censorship won’t stop. He said, “Chinese gatekeepers on the internet are so powerful and capable. I don’t think that memes cause better communication because a picture’s content seems limited and obscure. Also, once people figure out a way to avoid being censored, gatekeepers catch on very quickly”.

Because of increasing surveillance, Chinese dissidents use code words, symbols, and memes to comment on the violent suppression of the Tiananmen student movement of 1989. Web chatter increases every year when the anniversary approaches, but because of the energetic censors, people have to come up with new ways to opine. 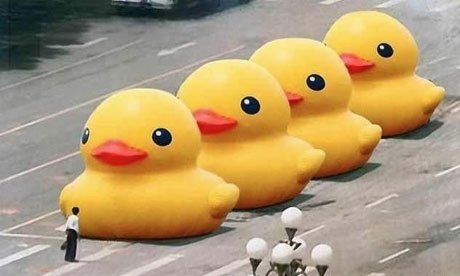 Yellow duck variation of Tank Man has been censored. Photo from PetaPixel

Mimicking the iconic “Tank Man” photo, creative netizens create other images. One, with giant rubber ducks replacing the tanks, went viral across Weibo, a Chinese Twitter-like social media platform. The rubber duck idea was borrowed from the giant yellow duck sculpture that was pumped up only to deflate in Hong Kong’s Victoria Harbor in May 2013.

When the rubber duck image went viral, the government began to target the phase “big yellow duck,” but, meanwhile, another meme of the picture without the ducks sprung up on Chinese social networks. Following this, pictures of Legos and farm animals reenacting the famous Tiananmen tank picture spread across the Chinese net.

Furthering the relationship between political conversation and memes, when Bo Xilai’s sentence was announced he was the second most-talked-about subject on Weibo, with documents from his trial being forwarded more than 22,000 times through social networking. 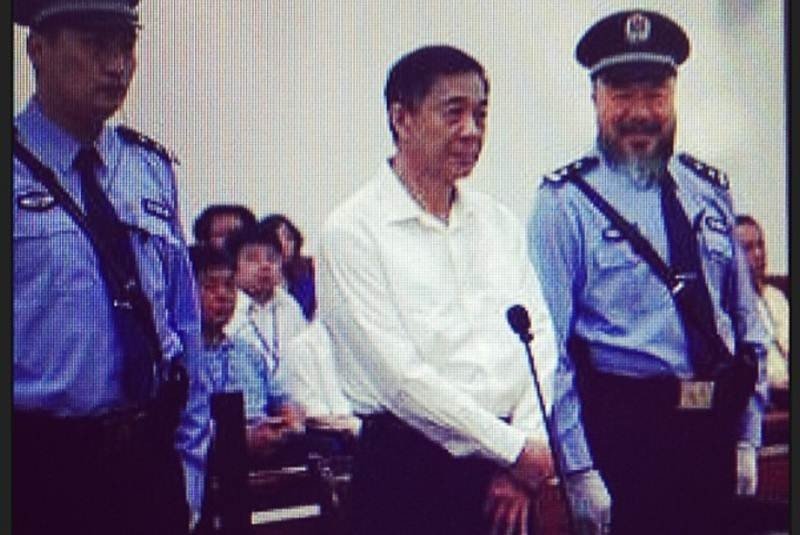 Meme of Ai Weiwei and Bo Xilai (Photo from Quatz)

Pictures combining famous Chinese dissident Ai Weiwei with Bo Xilai’s trial appeared online shortly afterwards, reflecting the interest in this case. The photo juxtaposed China’s government and outspoken dissidents. It is clear that many netizens doubted that Bo’s trial was mainly about corruption.

Antagonism towards authorities is a common theme in forums. A meme that plays on this is “Liu Bo is Very Busy.” Policeman Liu Bo wields a baton and chases after a variety of people. To netizens, Liu Bo is too zealous in chasing down wrong doers and is a stand in for a state that is seen as too intrusive and too limiting of dissent.

Some netizens may see Liu Bo as a Chinese version of the American meme “Scumbag Steve” After all, critics of U.S. President Obama have placed Scumbag Steve’s face atop the president’s body. Still, Chinese utilize Liu Bo more often to signal their discontent. Both memes, though, are intended to generate laughs. 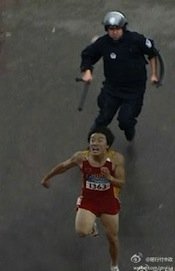 Memes in China are predominantly generated and spread by individual Chinese. Though critical of the government, they are largely tolerated because while they express discontent, they don’t advocate collective action. A Harvard study found that censors are primarily focused on stifling organized protest and act quickly if they see signs of group action or calls to action. Mere criticism (that doesn’t target leaders) is permitted.

In some headline cases, however, prominent web personalities have been targeted by the authorities. The so-called “big Vs” (microbloggers and others with large net followings) have been warned not to be cautious with their posts. The state wants to ensure no opposition leaders emerge. This frustrates some. 23-year-old Chinese college student Edison Lin said, “I always find people’s opinions on Weibo and other social websites screened out by the authorities. Especially when those opinions betray their country or disobey the themes their government communicates. This is quite troubling for me to see because cyberspace was once designed to express people’s different voices”.

Prof. Rosen argues, though that the state is committed to blocking the emergence of organized dissent. It “can go head and arrest the ‘big Vs’ and other online celebrities” before they mobilize followers. As he says, the state recognizes that “when the middle class becomes involved it’s much harder to control.”

Censoring memes, or jokes, seems to be a joke itself. But the Chinese government sees little humor in criticisms dressed up as rubber ducks or other silly objects.

Grass mud horse, or 草泥马 (Cǎo Ní Mǎ), is an imaginary animal meant to symbolize opposition to this government censorship. The words are homonyms for a vulgar expression meaning to have intercourse with your mother. Netizens began using the imaginary disgust with the government and its censorship. Starting in March 2009, caonima traveled via songs, doctored photos, and fake documentaries. Caonima is one of the most popular Chinese Internet entities, featured on more than twenty million web pages.

In a video that was later censored, a grass mud horse fights a river crab (hexie), which is a homonym for social harmony (hexie shehui), a slogan and government aim. The state often says it needs to censor the net in order to protect social harmony. Some netizens, those employing the meme, disagree.

Cǎo Ní Mǎ was born and flourished in response to the government’s efforts to “cleanse” the Chinese internet of filth and content that might “incite ethnic discrimination or undermine social stability.”

But most memes offer no political point of view whatsoever. For example, the Tang poet Du Fu has also become a meme. His face is superimposed on bodies doing all sorts of things, not always dignified things. Yao Ming’s laughing face is another popular meme.

Memes spread because they capture, if only for a moment, a feeling that netizens are eager to share. They are mostly silly. Some, though, make the state nervous. As the endurance of Cǎo Ní Mǎ illustrates, however, suppression may only nourish the subversive sensibilities of the net’s creative masses.

Caolinn Mejza is a writer for US-China Today. She is a native of Las Vegas, and a freshman studying public relations at USC.