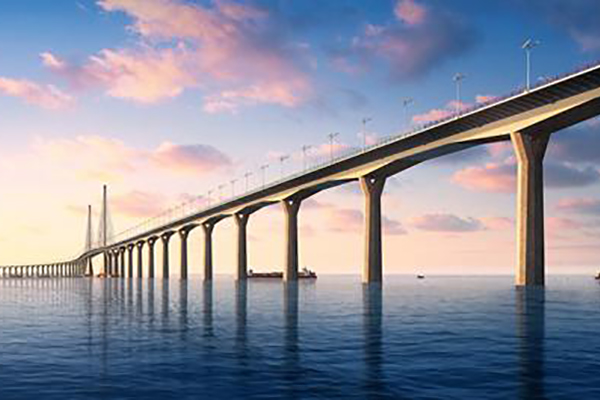 One of the most remarkable engineering projects ever undertaken, this bridge will link Hong Kong, Macau, and the Chinese city of Zhuhai, fundamentally changing the economic landscape of the Pearl River Delta.

The Hong Kong-Zhuhai-Macau Bridge (HZMB), crossing the Pearl River Estuary and linking Hong Kong in the East with Zhuhai and Macau in the West, will be the longest sea-crossing combination of bridges, a tunnel and artificial islands in the world. After completion, the 49.5 kilometers long project, which is currently under construction, will cost about 70 billion RMB (11.24 billion USD) and cut the four-hour driving from Hong Kong to Macau and Zhuhai to 30 minutes. It is expected that the bridge will bring 60-100 billion RMB（9.63-16.05billion USD) of GDP growth of cities on the western side of the Pearl River and have a huge economic impact on southern China, and on Greater China as a whole.

The design and engineering challenges in such a huge project are daunting. To meet the demand of cargo vessels of 300,000 tons in waters packed with shipping, the bridge floor has to be 80 meters high, which is the same height of a 26-floor building.

To avoid inference with the airports in Hong Kong Macau and Zhuhai, an immersed tunnel of 6.7kilometers will be laid undersea. Immersed tube tunnel technology will be used to connect the 76,000-ton weight tunnel. Considering the distinct climate and unique eco-system in the area, engineers decided to build artificial islands under the support of round tubes to reduce the silt and stone pollutions. German engineers who worked on the Resundsbron Bridge, the longest combined road and rail bridge in Europe which links Sweden and Denmark, were asked for advice on the tunnel tablet system. 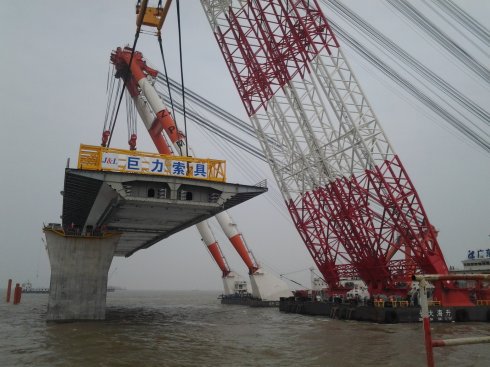 On April 16th, the first girder of No.CB04 section was hoisted and put on the bridge piers. The girder weighed 3000 tons, breaking the heaviest hoisting record in China. According to Xue Yayan, the director of the lift-on lift-off ship Haisheng, strong winds on the sea made it difficult to locate the girder, but they used radar to ensure the accuracy of the construction process. It took three hours to fix one girder. However, this was just a beginning. The No.CB04 section will need about more 50 girders to be hoisted. 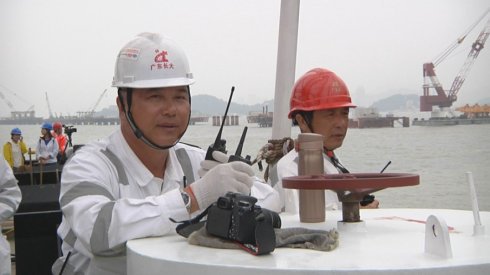 The most significant impact of the bridge will be in terms of the economy and communications. Completion will reduce the cargo transport time from Hong Kong to Macau to half an hour, which will help attract Hong Kong investment.

Prof. Vincent Tse, a visiting professor of the University of Macau and a businessman in Hong Kong who studies the Chinese economy, noted that Shenzhen developed rapidly because of its proximity to Hong Kong. Due to poor transportation links, other nearby special economic zones that were also established in the 1980s, like Zhuhai, saw only limited development. The cross-sea bridge will definitely bring more benefits to Zhuhai and the cities to its west.

In the past 20 years, Guangdong province in southern China saw its economic growth mainly come from development in the eastern side of the Pearl River Delta, especially from Shenzhen. The main reason was that it was easier for Hong Kong investors to get to Shenzhen, and the movement of goods was also more efficient.

Now, however, the bridge will make it possible for businessmen in Hong Kong to drive 30 minutes to Zhuhai. That will help Zhuhai play a more important role in driving growth in the western part of this region by attracting investment from Hong Kong. Compared to Hong Kong and Macau, Zhuhai has a low population density and a good natural environment, so the high value-added products and holiday resorts are expected to grow the most.

In terms of tourism, at the moment visitors to Hong Kong and Macau are increasingly from mainland China. But the closer connection between Hong Kong and Macau may attract more non-Asian faces. Moreover, according to Prof. Tse, many Hong Kong businessmen believe the bridge will provide an opportunity to make day trips between Zhuhai and Hong Kong.

Prof. Kuan Fung of the department of economics at The University of Macau also believes that if the government adopts the right policy, non-Asian visitors will come for sightseeing and gambling in Macau. However, Macau passenger ships and airlines may be affected negatively by the construction of the bridge.

Although the bridge will bring economic benefits, there are concerns it may damage the environment. The marine eco-system of the water areas around Hong Kong, Zhuhai and Macau will be changed, especially in terms of speeding up the accumulation of sediment. The bridge will also hinder the dispersal of waste water dumped in the sea, which means it may stay around and emit a bad smell.

“These days, if you walk in the area near the artificial island under construction in Heishahuan, a residents’ community in Macau, you can already smell the bad odor,” said Prof. Wang Zhishi from the Engineering Department of the University of Macau.

A huge construction project like the Hong Kong- Zhuhai-Macau project always has two sides. How to reduce the negative impacts and bring its positive influence into full play is a big challenge for governments and residents in all three places.

Angela Liang, Qiang Wei, and Nora Qiao Ruoxi are graduate students in the Department of Communications at the University of Macau.