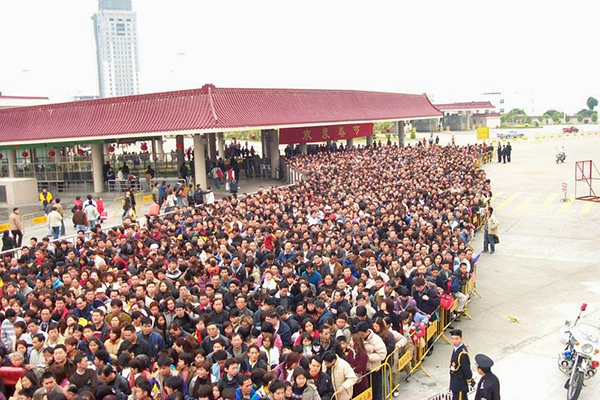 Is Macau Running Out of Space?

A look at overcrowding in the tiny territory and the pressures created by the huge influx of visitors, mostly from mainland China.

During the first day of the Easter holiday this year, 420,000 people crossed the border of Macau from Mainland China. The Gong Bei Boarder Post was totally packed. The huge crowds underscored an increasingly serious problem for Macau. The territory is being overwhelmed by people.

Passenger throughput at Gong Bei has now surpassed that of Shenzhen, making Gong Bei the most congested boarder crossing in China. At the same time, six huge new casinos are under construction in Macau. Traffic jams are getting worse by the day, and housing prices are skyrocketing.

These all raise the question: Is Macau running out of space? 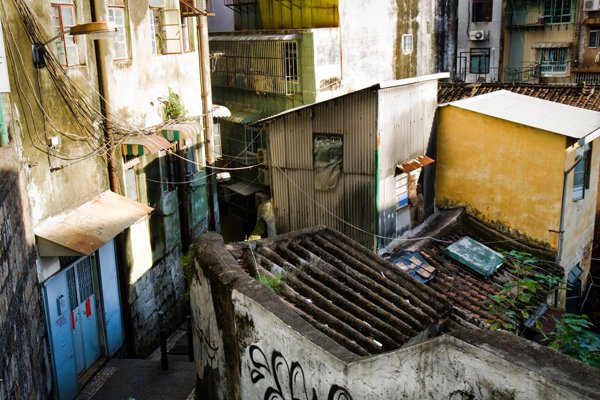 2049 will mark the end of what was promised to be a period of “50 years without change” following the handover of the former Portuguese territory to China in 1999. “2049” is also the name of a movie made by students of University of Macau which generated attention for its discussion of hot social issues like housing prices, traffic congestion and population pressures. 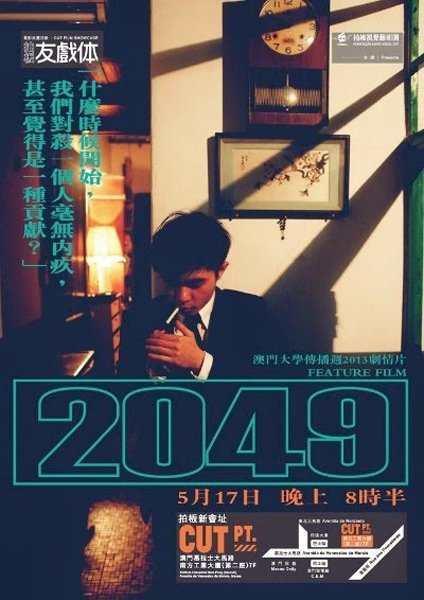 “We wanted to express our anxiety as the new generation,” said Houin Ao, the scriptwriter of “2049.” “Young people of Macau find that housing prices have become unbearably high, and mortgages takes 30 to 40 years to pay off. The downtown streets are always packed with cars and visitors. The situation won’t get better unless we do something.”

Ao wasn’t wrong. Macau has always lacked land. Hilly areas must remain the way they are for environmental protection purposes, and in fact they really are not suitable for development. As a result, 85% of Macau’s 600,000 people are crowded onto only 31.5% of the land. The average residential space per capita is a terrifying 20 square meters for a city with GDP per capita of USD$87,306. 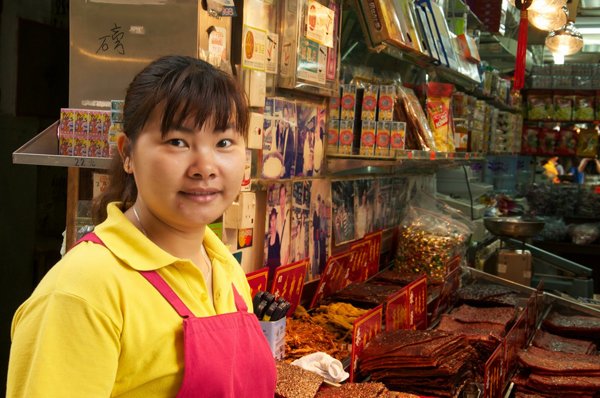 Ah Zing in in front of her clerk (Photo: Liu Mengchen)

The increasing number of outsiders, including tourists, foreign workers, and immigrants, has added to the congestion. Ah Zing is a sales clerk at a Macau traditional food shop located in Xin Ma Lu, one of the territory’s busiest neighbourhoods. Her job is to hand out free samples of dried pork slices to attract customers, mainly tourists. She’s been doing this for more than ten years, and says she has definitely benefited from the increasing number of tourists. “Compared to ten years ago, I think Macau is more congested and busier, but that means more consumers.”

On the other hand, her rent has increased as well.

Besides the lack of land and the large local and visiting population, poor land usage planning has added to the problem. The downtown area, residential areas, industrial areas and business areas are all mixed up. Poor zoning is one problem left over by history. The old town area is another. 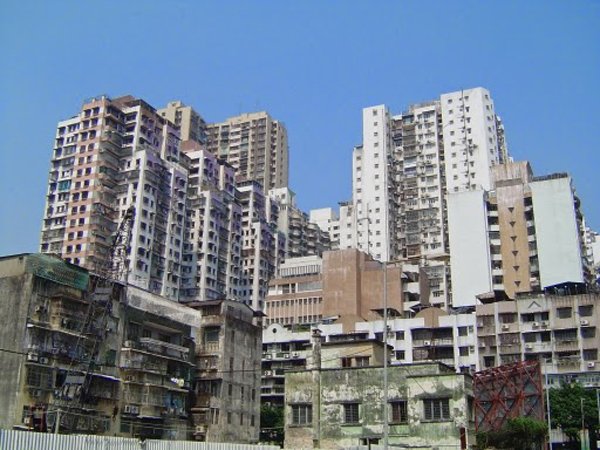 The old town area refers to the southwest part of Macau Island, which is the most congested one of Macau’s three islands. The Portuguese built up the first business district in the old town area. Some of the well-kept old buildings became historical heritage sites, which compound the difficulties of reconstruction work because a bold reconstruction plan might cause the view of these sites to be blocked.

On the other hand, according to the Macau Civil Code, the government cannot start reconstruction work until every owner gives permission. However, many owners of the low-rise buildings of the old town area are just holding on to their property waiting for a better compensation price. The result is that these buildings have been left empty for years.

“The government is acting soft on the old town reconstruction problem,” said Prof. Yang Yunzhong of the “One Country, Two Systems” think tank. “The potential of Macau’s land hasn’t been completely used yet. Imagine how many young couples could live inside of the tall buildings that are replacing the one or two-floor ghost houses.”

Indeed, because of the lack of a legal framework, the government cannot push too hard on land reclamation.

“The reconstruction progress has to be delayed because another round of legislation consultation ended up with nothing definite because of the constitutional complexity of property right,” says Lo Hong Leong, an architect in the Department of City Planning of Macau’s Land, Public Works and Transport Bureau. “The government doesn’t own the legislature.”

So just how serious is this situation?

“The problems certainly exist,” said Lo Hong Leong. “But there are solutions.”

However, Leong said “There won’t be many long-term reclamation plans in the future. With Zhuhai in the north, the Shi Zimen waterway in the south, the bridge in the east and the inner gulf in the west, there won’t be much space for Macau’s expansion. And the rest of the shoals are not suitable for reclamation.”

Heng Qin Island offers another way to deal with the problem. Heng Qin belongs to Macau’s neighboring city Zhuhai. The border between Macau and Zhuhai has long been seen as a line between a Special Administrative Region and a Special Economic Zone city, or, some might say, between a capitalist society and a communist society. But now, 15 years after the hand-over, the line has been re-drawn and blurred. 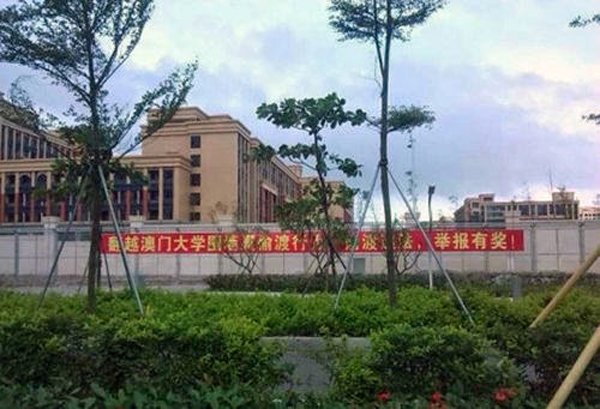 The University of Macau’s new campus has just been built on Heng Qin after the central government agreed, in effect, to give the island for Macau’s use. And this is only a start. The future of Zhuhai and Macau is more or less predictable: Five more kilometers of Heng Qin Island will likely be used for a Zhuhai-Macau joint industrial park, although details like the exact location and start time are still to be discussed. In addition, the chief executive of Macau has said that an application for renting 10 square kilometers more of land from Heng Qin has been submitted to the central government.

With the two cities linked, by the time the 50-km long Hong Kong-Zhuhai-Macau Bridge is launched, the blueprint of a so-called “Half an hour life circle” is no longer a wild dream. Macau would offer the attraction of being the world’s largest center of gambling. Zhuhai would offer lands and ports. As Prof. Yang noted, “the key word of the future of Zhuhai and Macau is Ambition”. 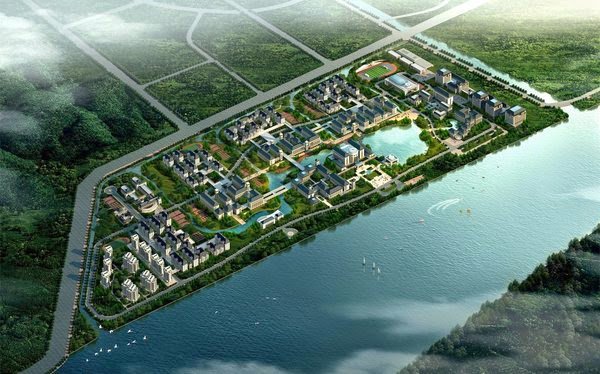 Coco Liu is an undergraduate student in the Department of Communications at the University of Macau.