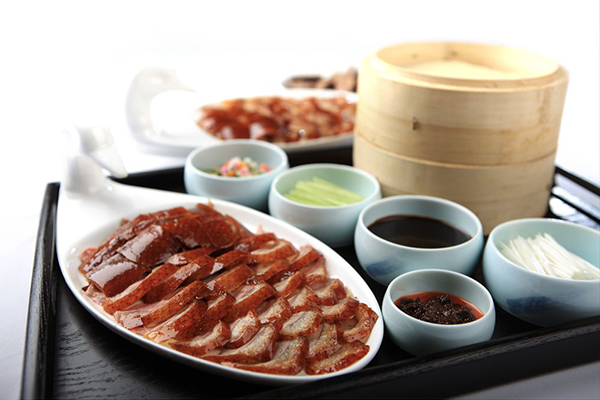 Chinese chain restaurants are bringing established, high-end names to Los Angeles. Chinese is no longer a bargain choice, but a choice revealing “taste.”

I first tried Peking duck nearly a decade ago in a gilded banquet hall in Beijing. On a rainy day in Los Angeles, my colleague and I ventured to the Westfield Century City to try the high-end, Sichuan-inspired Meizhou Dongpo. At $40 for half of a roast duck, the restaurant certainly meets the power lunch requirements of lawyers and entertainment executives of the nearby high-rise towers. The chef brought out the bird and carefully sliced it before us on a white ceramic duck plate. And, as I took my first bite, I was taken back to that banquet hall in Beijing nearly a decade ago.

The influx of Chinese immigrants to the Greater L.A. area and investment by the Chinese business community, especially in the San Gabriel Valley (SGV), has contributed to the increase in Chinese chain restaurants from mainland China and Taiwan. While it has long been possible to try high-quality regional Chinese cuisine in SGV, new chains are bringing established, high-end names such as Meizhou Dongpo, Din Tai Fung, HaiDiLao, Little Sheep and others, to diners across L.A. Chinese is no longer a bargain option but a choice revealing “taste.” The rise in new Chinese investment and young diners has been a determining factor in the success of these chain restaurants, as well in growing interest from Angelenos in Chinese food.

“It is the upper-middle class that have friends and family here, and this generation of kids who, children of these immigrants, are driving the growth within the restaurant population in the SGV. If you broaden that to Asian youth culture, it is driving the entire restaurant scene in L.A.,” says Besha Rodell, food critic at L.A. Weekly. “It makes sense that there would be money put in to cater to that crowd… It is an audience that has the need to be served and people are serving that.”

The Evolution of Chinese Dining in Los Angeles 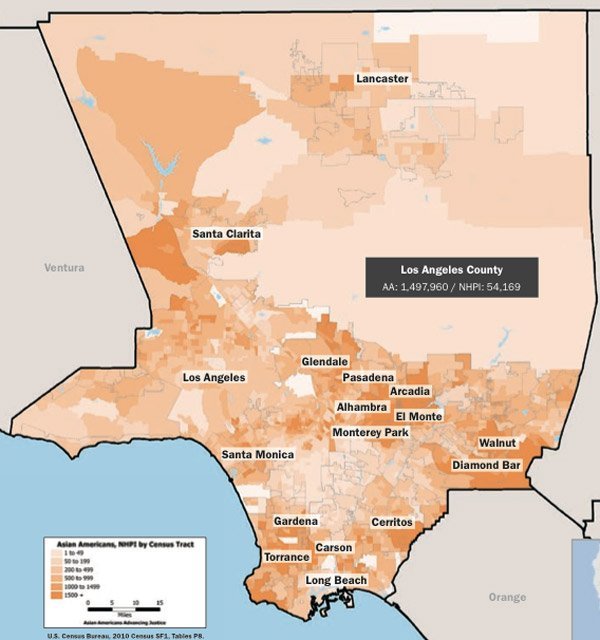 A map of the Asian/Pacific Islander population of L.A. County, by census tract. Courtesy of Asian Americans Advancing Justice – L.A.

In Greater L.A., some cities in the SGV have Asian Americans majorities. This area is home to the first suburb in the United States to have a majority of Asian residents: Monterey Park. In 1980 the neighboring city of Arcadia had 4% Asian residents. By 2010 it had 59%. Chinatown has the highest Asian population in the Southern California area at 70.6% (L.A. Times map). Given the rise of Chinese migrants, seen through the rise in investment and community-focused business, and a vibrant Chinese youth culture in L.A., there has been a higher demand for Chinese cuisine, and a recent spike in high-quality, regionally-focused cooking.

The SGV and Greater L.A. area differ from other national regions that have also seen a rise in Chinese migrant populations. While other cities have experienced an influx in Asian migrant populations, the Southern California region also caters to an affluent population — with Arcadia claiming the title of the “Chinese Beverly Hills.” According to food writer Clarissa Wei, this affluence and culture building in SGV has given way to a unique Chinese youth community, sometimes known as the “626 generation” owing to its area code. For diners in L.A., this community is visible and common in the area’s most beloved and acclaimed restaurants. So much of Asian life revolves around food and young people especially eat out a lot. Flashy Maseratis and couture-adorned twenty-somethings is a familiar sight at restaurants in the area. Their patronage and demand has helped buoy the phenomenon of Chinese chain restaurants coming to the area.

Chihuo, the largest online food platform for the Chinese community in the U.S., is representative of the area’s “youth engagement.” Amy Duan founded Chihuo in L.A. in 2011 after meeting fellow chihuo or Mandarin for “foodies” at Tasty Garden in Alhambra and posting a short Weibo message about the experience. Duan says that Southern California’s thriving Chinese community is a big factor in the recent arrival of chain restaurants from China.

“In recent years there have been a lot of trends including big chain restaurants from China coming to the U.S. They bring the original chili peppers and all kinds of pickles and dry food from their hometown in China and they try to bring the real flavor to the U.S.” Duan says the restaurants “see the market is rising” and cater to the “whole new immigrant generation from China to the U.S.” To her, “L.A. is a market that leads the change for the whole U.S. because it really is like a melting pot.”

Michael Wang, a managing director for Meizhou Dongpo, speaks to the economic reasons behind the opening and expansion of Chinese chain restaurants. “Initially, the goals for expansion to the U.S. were to increase brand recognition globally. We chose to open our first restaurant in LA because it provided us with a market that contained a good combination of Chinese and Asian customers, and other customers.” 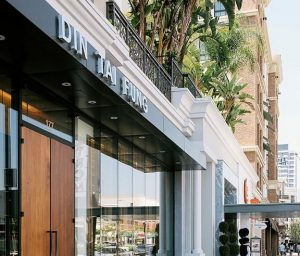 Throughout the 20th century, Chinese restaurant owners have faced an uphill battle. Rodell says that Chinese cuisine has historically been categorized as “cheap” and that is perceived to be “easy [to make] and should not cost a ton of money.” Despite this normative view, “the truth is that Chinese cuisine is older and more nuanced and has the capacity for fanciness and outstrips Europe.” While the presumption that Chinese food should be cheap and that it is uncomplicated has tainted many Americans’ views, Rodell says that perceptions can change. Chinese chain restaurants have played an important role in altering this perception because, according to Rodell, “what they are doing is introducing a kind of style and design that include aspects of upscale restaurants that wealthy Chinese would like to see.”

In addition to adapting to a new, and somewhat resistant audience, foreign restaurants have logistical barriers to entry. Popular Chinese chain restaurants in L.A. including Little Sheep, Chung Du Impression, Meizhou Dongpo and Din Tai Fung have had to combat the historical assumptions of Chinese food and the regulatory issues associated with opening a restaurant. Rodell says that “…the biggest challenge that any restaurant faces in the U.S. is really staffing and regulatory from the city and the state. Opening a restaurant is difficult anywhere… There could also be cultural and language barriers to opening a business.” Duan adds, “[The restaurant owners] have to learn how to control the budget and get non-Chinese people to accept the food.”

From a management perspective, Wang can attest to the real challenges Chinese chain restaurants face. “One notable challenge is the difference in management style and corporate culture that we’ve experienced when working with our Chinese counterparts.” He adds, “Mainly, it’s a balancing act — we would like to retain the culture of our company but also add in elements make our restaurants better suited to the preferences of local customers.”

While the challenges are many, Chinese chain restaurants in Greater L.A. have had a very positive reception. Meizhou Dongpo’s la zi ji (Chinese spicy fried chicken) was lauded by renowned L.A. Times food critic Jonathan Gold. In his June 2016 review, he wrote that “[a] proper plate of la zi ji looks like something out of an Iowa nutritionist’s nightmares” and “the aftermath of a Chinese New Year firecracker assault,” ultimately declaring it “the essence of what great fried chicken might be.” 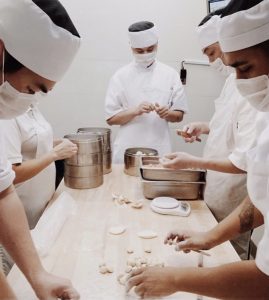 L.A. is not the only major American city with a considerable Chinese population, but it may well be unique in the way the city interacts with Chinese cuisine. D.C. has a similar Chinese enclave in nearby suburban Virginia, however Rodell bets that residents are not “quite so comfortable” with the same food. Meanwhile, in Glendale, she mentions the “very white” Armenian and middle class suburb that is home to a Din Tai Fung with a perpetual two-hour wait. “Angelenos are open and have been eating Chinese food for enough time. And there is enough wealth within the Chinese community that they feel comfortable enough to put it in a big, fancy mall in the San Fernando Valley.”

The growing trend of Chinese chain restaurants in Southern California shows no signs of slowing with Eater reporting the arrival of Dong Lai Shun, a Beijing-based halal mutton restaurant. It marks the specialty hot-pot restaurant’s second U.S. location. Meizhou Dongpo has two L.A. locations, 137 worldwide, and plans to expand into Northern California in the next two years.

From L.A.’s first chain — Quanjude, a Beijing duck outlet — to today, choice in Chinese food has given way to experimentation and a new undercurrent of Chinese restaurants. Those that borrow recipes and legitimacy from China and Taiwan, but occupy thoroughly modern spaces and menus to match. Take Lao Tao in Chinatown’s reinvigorated Far East Plaza. The space has a minimalist vibe and the name Lao Tao alludes to people who seek out good food, or the Taiwanese name for “foodies.” On the menu are playful bao buns filled with beef tongue or sides of tofu smothered in century-year-old egg and pork floss. It’s not alone in its stylish presentation of Chinese favorites: Silver Lake’s Fat Dragon and Pine & Crane, and West L.A.’s R.O.C. Dumplings add to the new wave. These restaurants offer thoughtful takes on Chinese food and question what it means to be “authentic” in L.A.’s ever-evolving Chinese restaurant scene.