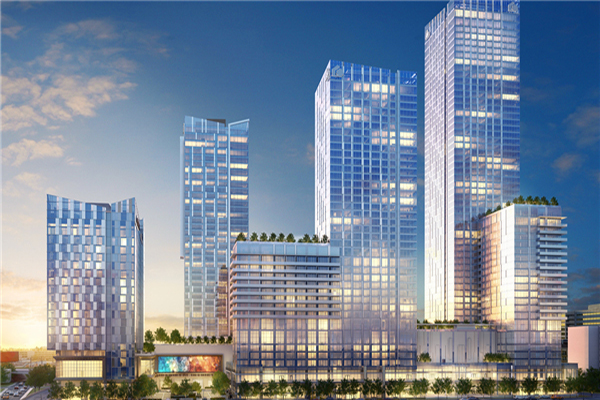 Downtown L.A. is experiencing a building boom fueled by Chinese real estate companies and expectations for how the developments might change the area.

Standing on the corner of Figueroa Street and Chick Hearn Court in the heart of Downtown Los Angeles (D.T.L.A.), one can see spectators pour out of the Staples Center and congregate around the L.A. Live commercial center. Across the street, a crane hovers above Figueroa amidst the sound of hammering and construction workers barking orders. The crane is managed by Oceanwide Holdings Group, a major Chinese development company that is currently developing 10 projects in the U.S.

“I’m retired now, but I’ve worked in Downtown Los Angeles since the late 1980s,” says John, an L.A. native, who chose only to be identified by his first name. Pointing across the street at the Oceanwide project, John recalls, “That used to be a parking lot. I would park in that lot for events here at the Staples Center.” 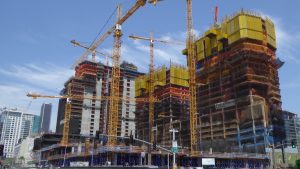 The Oceanwide project in progress in DTLA. Courtesy of Oceanwide

John and many more Angelenos are witnessing the metamorphosis of Downtown L.A. Over the past decade, L.A. has been home to increasingly more complex and expensive Chinese development projects. The Oceanwide project is one of the most noteworthy. Located in the heart of Downtown, the project reportedly costs roughly $1 billion, making it one of the largest construction projects in the entire L.A. metropolitan area. Oceanwide’s project is just one of four current projects in D.T.L.A. being developed by Chinese companies. Greenland Group, Shenzhen Hazens (the project is currently obtaining approvals for the right to develop property) and Shanghai Construction (construction will begin in 2018) round out the group. This increasing interest in investing in the area was especially noticeable when Greenland Group began developing the Metropolis project in 2014. Metropolis, which includes the construction of a 38-story apartment building and a 19-story hotel, is currently the largest construction project in L.A. by rentable building area.

Rob McRitchie, vice president of Jones Lang LaSalle, a major financial and professional services firm, says, “I think the [rising] trend [of Chinese real estate investment] has been in the new term, over the past decade or so. From a development standpoint, we’ve really only seen this kind of investment in the past couple of years.”

These Chinese firms are part of a major development push in DTLA. Some of D.T.L.A.’s older buildings were constructed during the early 1960s-1980s and are now being remodeled or demolished to be replaced by more modern, larger and taller developments. The last big boom in DTLA was four decades ago. Building heights aren’t the only thing climbing in D.T.L.A. According to the USC Lusk Center for Real Estate Casden Real Estate Economics Forecast, 2016 saw a nearly 7% increase for rent in D.T.L.A.

In 2016, the total amount of Chinese FDI in the U.S. tripled and reached a high of $46 billion. In commercial real estate alone, China has invested $20 billion in the U.S. since 2000, and $5.6 billion is located in the western states of California, Oregon, Washington, Nevada and Arizona.

So what is attracting the Chinese to Los Angeles? “[The Chinese] know it; the largest Chinese American population resides in L.A. County and Southern California. A lot of them have been here, a lot of them have family here.” explains McRitchie. “L.A. stands as the 21st century melting pot; it represents every culture in Asia, every culture in South and Central America, and certainly the European culture, so I think all roads lead to L.A.”

Yet Arthur Kroeber, the managing director of Gavekal Dragonomics and editor of China Economic Quarterly, believes the highly desired L.A. lifestyle is not the only thing driving the Chinese to invest in real estate in L.A. “If you look within China, the reason is that financial markets are very weak and underdeveloped. If you look at the stock market [in China], corporate governance and regulation of the stock market is very weak, so when you buy a stock, you really don’t know what you’re buying. Because real estate markets have generally been rising the last 20 years, there’s generally a view that it’s a safe investment because it will always increase in value.”

Hospitality-related real estate is the most frequent type of projects that the Chinese invest in in the U.S. “Hospitality is something that is easy for foreigners to buy; they understand it.” says McRitchie. “Most Chinese are on the development side, where they buy land and then are developing it.”

Besides large-scale development projects, individual Chinese real estate purchases of homes are also becoming increasingly popular. The Los Angeles metropolitan area is home to the second largest Chinese-American population in the U.S., after the New York metropolitan area. Such a large population provides further incentive for Chinese nationals to invest overseas by purchasing homes here. “Corporations want to get their money out and so do the individuals,” explains McRitchie, “Plus, attending an American university or high school is in high demand. The U.S. is a safe place to invest, and who doesn’t want to keep their investments safe?” 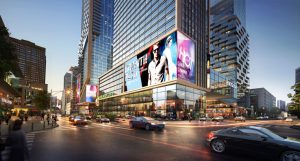 Concept of the Shenzhen Hazens L.A. Center in DTLA. Courtesy of Hazens Group

Residents can’t ignore the changing skyline of L.A. Residents of D.T.L.A. have varying opinions of the current construction projects and the rise of Chinese real estate investment in Los Angeles.

“I’m always a fan of domestic companies,” says Ron, an L.A. native USCT spoke with. “I’m not really happy to hear that a Chinese company is developing here. It’s always tough thinking domestically versus foreign because the US does the same thing and develops overseas. My general opinion is that as long as it doesn’t negatively impact the community, it would be good for people to have, but I can imagine some stubborn feedback about it not being a domestic company.”

Some residents have welcomed Chinese investment in the area. “I think global competition is generally a good thing, especially from an American point of view, but I do think it is something we should be cautious of and keep an eye on,” says Lacey, a recent USC graduate. “It’s always good to boost business, and I think this will bring more growth to the community. And apartment complexes? That is something that L.A. really needs: residential spaces.”

L.A. received 47.3 million tourists in 2016. Mr. Zhou, a middle-aged Chinese man vacationing with his family in L.A., noted the construction and said, “More and more Chinese capital is inflowing into the U.S., which prompts Americans to learn more about China. No matter what, the main purpose of Chinese companies is to gain profit.”

Developing the Future of Los Angeles

In the past decade, China has been a leader in the development of D.T.L.A. and shows no sign of slowing its developments. The projects are transforming old buildings and parking lots to modern, denser areas for living, recreation and work. Thomas Feng, CEO of the Oceanwide Plaza, is hopeful for the impact he feels his project will have on the community.

“Oceanwide Plaza will impact not only South Park [section of downtown], but all of D.T.L.A. We are bringing to life a new standard of urban living in the community by creating a prominent city center that our future guests will connect with the moment they arrive. Our future residents will be able to take full advantage of everything at their fingertips, while finding a place above it all where they can escape.”

The Greenland project hopes to accomplish similar goals. “Metropolis is an interesting reflection of not only the transformation in downtown, but of the city at large into a 24-hour, modern city,” says Ryan Aubry, a development manager at Greenland, USA. “Greenland USA and Metropolis are setting a new standard in Los Angeles by offering its residents luxury urban living.”

The new residential buildings, like the ones that will be located at Oceanwide Plaza, are fancier than their predecessors. The Los Angeles Rental Stabilization Ordinance (RSO) of 1979 provides for rent control in residential buildings constructed before that. New apartments can be rented at market rates, including the new Chinese projects.

Besides providing a new look to LA, the abundant construction projects have affected the economy as well. “We also see Oceanwide Plaza having a significant impact on economic growth for the city of Los Angeles with the creation of approximately 9,000 jobs over the duration of the project,” says Feng.

The Greenland project also boasts of its job creation. “When we began to develop this project, we were tasked with transforming a vacant lot in an underdeveloped part of downtown into one of the most desirable properties in the city,” says Aubry. “The hotel and residences were much needed so both the business and social community in downtown have been supportive, especially as we’ve created more than 10,000 jobs along the way.”

While bold foresight marked the Chinese developments that came in during 2010-2011, what is notable about this most recent phase of Chinese development is their sheer scale. All of these projects have undoubtedly changed the face of Los Angeles. “The Chinese helped put Downtown into what I would call a “Phase 2”, “Phase 1” being the pre-recession market, and “Phase 2” being the boom of Downtown. [The Chinese] certainly helped to achieve that boom,” says McRitchie.