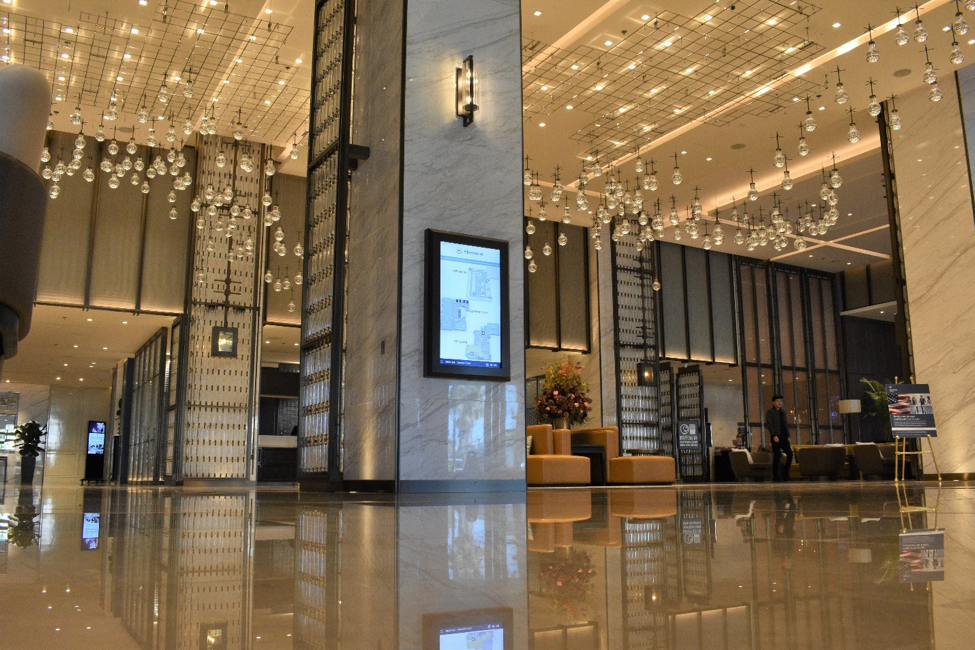 The Evolution of an Ethnoburb

One Chinese-owned hotel is a microcosm of change in the San Gabriel Valley.

The Sheraton Los Angeles San Gabriel sticks out among the local shops, restaurants, Asian food markets, and strip-malls along Valley Boulevard. The five-story brick-and-stone structure occupies the better part of a city block. It appears more suited to an urban downtown or an international airport than to this unassuming Los Angeles suburb. Yet, despite being far from any major tourist destinations, most of this Sheraton’s 288 rooms are filled with international visitors.

“I would say 60 percent of [our guests] are Chinese and 40 percent are English-speakers,” said May Zhou, a front-desk agent at the hotel.

The Sheraton is one of the most prominent instances of Chinese investment transforming the San Gabriel Valley, built with Chinese money for a largely Chinese audience. From retail developments like the San Gabriel Square to private Chinese mansions in Arcadia, Chinese-backed projects have driven the region’s growth from a sleepy Los Angeles bedroom community, to a bustling new Chinatown.

Sandy Rosco, executive director of the San Gabriel Chamber of Commerce, said that Chinese projects have helped create a snowball-effect of investment in the San Gabriel Valley. 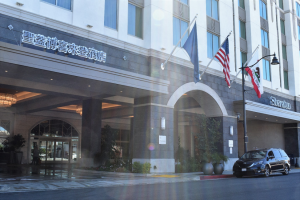 The Sheraton’s Chinese and English names are displayed side by side at its main entrance.

“When you have investors like that that are pouring money into your city, it gives other people the confidence to do the same,” said Rosco. “It’s been a very big financial plus for the city of San Gabriel.”

San Gabriel’s only two hotels, the Sheraton and the Hilton San Gabriel, are built and controlled by Chinese investors. The Sheraton’s owner, Fuer Yuan of the Hazens Group, also owns the Sheraton Gateway at the Los Angeles airport and is constructing a massive hotel and apartment complex at the current site of the Luxe City Center Hotel in downtown Los Angeles.

Many of these projects are funded through the U.S. government’s EB-5 program, which allows foreign nationals who invest at least $1 million and create 10 jobs to become permanent U.S. residents. The program has already transformed downtown Los Angeles’ skyline through projects such as the Metropolis Los Angeles and Oceanwide Plaza complexes, both $1 billion projects with luxury condos, shopping centers and hotels. Among the larger San Gabriel Valley projects are a Courtyard Hotel by Marriot in Monterey Park —currently still under construction — and the Sheraton Los Angeles San Gabriel.

Signs of the Sheraton’s Chinese ownership might not be immediately apparent. Yet, subtle indications of the hotel’s target clientele greet visitors the moment they step through the front entrance. The lobby is marble from floor to ceiling, designed by a Chinese contractor to emulate the look and feel of Sheraton locations in China. The front desk has placards advertising the hotel’s acceptance of Alipay, an electronic payment service popular in China. The entrance to a gourmet Chinese restaurant sits just off the south side of the lobby.

Fred Kokash, the Sheraton’s director of sales and marketing, said that luxury services at the hotel are a draw for high-end Chinese visitors. “This is not your traditional Sheraton,” said Kokash. “We have not one, but two fine-dining restaurants, a full-service Starbucks and a spa located in the hotel.” 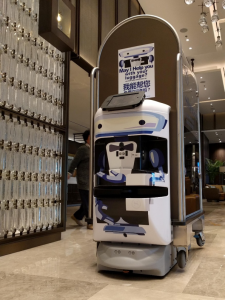 One of the Sheraton’s eight robot butlers wheels off on a delivery.

Sheraton was the first international hotel chain to enter China after the country opened up to foreign businesses in the early 1980’s. This has, according to Kokash, afforded the Sheraton brand a higher status among Chinese travelers than similar western hotel chains.

Peter Xu, a local resident in San Gabriel who frequents the hotel and often chats with Chinese guests, said that staying in a familiar, Chinese-styled environment is crucial to many visitors.

“Most Chinese who have just arrived in America have subconscious apprehensions,” Xu explained in Mandarin. “They feel safer coming to an area where they can communicate easily and are surrounded by other Chinese.”

The subtle conveniences the Sheraton provides, such as being able to order room service or arrange transportation in Mandarin, are part of a Chinese continuum that many travelers enter the moment they board their flights to America. It is, in no small part, this seamless Chinese experience created by the hotel and surrounding community that allows the Sheraton to draw patrons from half a world away.

“Chinese travelers are basically looking for two things, safety and ease of communication,” Xu said. “They feel more comfortable coming to a Chinese area like this when they’re in such a foreign place.”

The Sheraton is projected to bring San Gabriel more than $70 million in tax revenue over the next 30 years, according Angelica Frausto-Lupo, the city’s Economic and Development Manager. Another hotel down the street, also under Chinese ownership, is projected to bring in nearly $45 million over the same period.

“These projects have been huge for San Gabriel,” said Frausto-Lupo. “For a city of 4 square miles, that’s a lot of money.”