By Matthew SladeJune 2, 2020 No Comments

On January 11th of 2020, Taiwanese voters decided Tsai Ing-wen would continue as their president and her Democratic Progressive Party would continue to hold a majority in the Legislative Yuan. Tsai defeated Kaohsiung Mayor Han Kuo-yu of the Kuomintang (KMT). The election turned on domestic issues, Taiwan’s place in the world, and its relationship with China.

A year before the election, observers were skeptical of Tsai and the DPP’s chances.   2018 elections saw KMT victories (including Han Kuo-yu’s, ending two decades of DPP control in Kaohsiung) Some saw this as a referendum on Tsai’s presidency. But by November 2019, most saw Tsai and the DPP doing much better with potential voters.  By the eve of the election, Tsai and the DPP’s success was all but certain.  This feeling among observers was certainly not misplaced; Tsai defeated her KMT opponents in the largest election victory Taiwan has ever seen, earning over 8 million votes and holding onto the DPP majority in the Legislative Yuan. As polling data became available, it was clear that this victory was due in no small part to young voters, most of whom staunchly rejected the KMT and embraced Tsai. With the election over, the question now is what contributed to this emphatic support of the DPP by young people, and whether this type of support will continue. 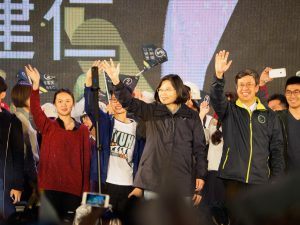 Tsai-Ing Wen waving to supporters during the 2016 presidential election cycle.

To understand why Taiwanese youth are voting the way they are, understanding the two major political parties in Taiwan is important. The incumbent Democratic Progressive Party, as the name might suggest, emerged in the 1980s as a progressive platform which “was a conglomeration of [many] civil society forces that were protesting against the authoritarian government at the time [as well as] different social movements,” says Russell Hsiao, executive director of the Global Taiwan Institute in Washington D.C. Since then, the DPP has cemented itself as the more liberal party on the island, and under President Tsai, has been in power since 2016.  The values espoused by DPP stand counter to those of the far older and more conservative Kuomintang party, which Hsiao describes as  “a very old and very established political party that fled China to Taiwan in 1949, [one which] has a legacy of creating the Republic of China, and [which] ruled the island as a one-party state for decades.” KMT presidential candidate Han Kuo-yu, won election in 2018 through his fiery style and populist appeal. His campaign attracted older voters who tend to align themselves with the KMT, a legacy of the old military families and conservative forces that have been on the island for decades.

Polling data from the Taiwanese government compiled by Nathan Batto, an Associate Research Fellow at the Institute of Political Science at Academia Sinica suggests that over 57% of voters aged 20-29 cast their vote for Tsai in the January election, compared to just 12% for the KMT. Support for the DPP among this demographic is more than 10% higher than the next youngest age bracket, and as age increases, so did support for Han Kuo-yu and the KMT.

“A lot of people were quite confident that young people were rejecting the Han Kuo-yu candidacy,” says former Taipei Times journalist Martin Williams “By and large, there was an acceptance that young voters were going to vote for the government, and in the end I think that’s exactly what happened.” Why then are young voters rejecting the KMT in favor of the more liberal DPP?

Hsiao and Williams both pointed to the 2014 Sunflower Movement as a potent early indicator that Taiwanese youth were not only becoming more politically involved but also leaning more towards the progressive movement. These student-led protests against the KMT government of the time erupted after the passage of a controversial trade agreement with China that was perceived to threaten Taiwan’s economy and ability to withstand influence from Beijing. 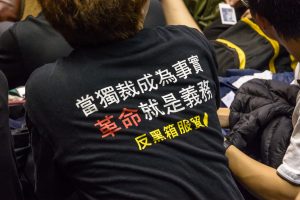 A Taiwanese protestor dons a shirt saying “when dictatorship is a fact, revolution becomes a right” in 2014 during the Sunflower Movement.

Williams has lived in in Taiwan for decades. He remarked that “young people in Taiwan actually changed the politics here during the Sunflower Movement in 2014. The ability of young people to frame the debate here is formidable and not to be underestimated”. With the Sunflower Movement, students and young voters have been mobilized in Taiwan, and this mobilization has trended in the direction of the DPP. Nothing exemplifies this trend better than Lin Fei-fan. In 2014, Lin was one of the leaders of the Sunflower Movement; today, he serves as Deputy Secretary-General of the Democratic Progressive Party.

Moving beyond the Sunflower Movement, it seems that the other most significant factor playing into youth voting patterns in 2020 took place nearly 500 miles (800 km) away. The impact of the Hong Kong protests, though geographically distant from Taiwan, was decidedly felt keenly on the island. Uneasiness over the encroachment by Beijing into Hong Kong hits home for young Taiwanese who don’t want their island to fall into similar circumstances. The system that governs Hong Kong and guarantees certain freedoms, that of “One Country Two Systems”, is the same framework that China’s President Xi Jinping has suggested for integrating Taiwan into mainland China. People in Taiwan, and especially young people, are aware of this fact and fear it.

As Williams explains, “the Taiwanese students have looked at the democracy protests and feel an affinity for them, an affinity in a struggle for a certain ideal. The protests in Hong Kong are in large part students, and so there is a connection there. There is a recognition in a common foe. There is a sense of a common cause between them.”

As the Hong Kong protests turned more violent towards the end of 2019, and with Beijing asserting more pressure, this may have played a role in voter turnout, boosting Tsai and her party. Since its inception, the DPP has always positioned itself as protecting Taiwan autonomy, while the KMT has in recent decades taken a more conciliatory approach towards the PRC. In the current climate of increasing hostility and aggression rhetoric, many in Taiwan see this as reckless and irresponsible. “[It is] hard to imagine that [the Hong Kong protests] did not have an effect on the election,” Hsiao says. “The ruling party was able to capitalize on the movements, and for that reason, I think that Beijing helped in some ways. People say that, jokingly, Xi Jinping was President Tsai’s best campaign manager with what he was doing in Hong Kong”.

While it’s difficult to quantify the effect from the events in Hong Kong at this point, people in Taiwan definitely discussed the two together. One very real consequence was the KMT hardened its stance on China so as not to seem overly pro-Beijing to undecided voters. During the campaign to determine the KMT nominee, candidates harshly criticized Beijing’s offer of “One County, Two Systems.” Han Kuo-yu  declared that if he were president, Taiwan would fall under the system “over [his] dead body.” What is also clear is the DPP was able to use the turmoil in Hong Kong and their historical pro-autonomy learning to their advantage, convincing voters that a vote for Tsai was a vote to avoid the same fate as Hong Kong. This was spread through the slogan that encapsulated the fears and anxieties Taiwanese voters felt watching the protests: “Hong Kong Today, Taiwan Tomorrow.”

As President Tsai’s defiant policies towards Beijing earn support from young voters, it seems unlikely that we will see any major change from the DPP.

“What happens next will really depend on the opposition party,” Hsiao says. “There are calls within the KMT for reform, so whether or not there will be a generational change or not in the KMT will be important. It will depend on whether or not younger members of the party can reform it from within.”

Whether or not the KMT will accomplish these much needed reforms remains unclear, but if two large electoral losses don’t galvanize efforts to re-brand the party, it’s hard to imagine what would. In the meantime, President Tsai will likely use her final term as president to shore up support for the DPP and preserve her progress at home and abroad.

In the United States, Taiwan has enjoyed considerable bipartisan support for many years now. The Taiwan Relations Act in 1979, the Taiwan Travel Act in 2018, and most recently the Taiwan Allies International Protection and Enhancement Initiative (TAIPEI) Act passed under President Trump shows a certain degree of continuity in the Taiwan-US relationship that is expected to continue. The election results in January and the surge of youth support for the DPP align with the U.S. goal of maintaining ties with Taiwan and using the island as a bulwark against the rise of China in the Pacific.

“Washington’s traditional policy on Taiwan elections is that they do not pick or favorite a candidate in any way. That said, I think that privately, everyone was pulling for President Tsai,” says RAND defense analyst and USC adjunct professor Derek Grossman. He sees Tsai as the candidate that best preserves the “strategic ambiguity” between Taiwan and the United States, and that come November, a change in the White House would not disrupt this support.

Bonnie Glaser, Senior Advisor to Asia at the Center for Strategic International Studies, shared a similar sentiment. Glaser remarked that a change in November might “change policy on the margins but not in the core. I would argue that the changes under Trump have also been on the margins’.” If anything, Glaser sees a potential Democratic administration conducting similar affairs with Taiwan, but in a “quieter style.” Whatever the outcome in November, it seems unlikely that we will see any major changes from the U.S. towards Taiwan.

Looking to the future of Taiwan, one has to wonder if the strength of the youth movement and power of the youth vote will continue to benefit the DPP. While January was a good showing for Tsai and her party, it was also an unprecedented moment for third parties. Several groups, most notably the Taiwan People’s Party, gained seats in the Legislative Yuan and had a strong showing. The same youth-driven enthusiasm for the DPP is responsible for the rise of these third parties. When asked if we might see a major shift in the leaning of younger voters, Martin Williams responded that “the bottom line is that young people in Taiwan will vote for the party that has their interests, and at this point in time this seems to be the DPP.” This is not to say that this couldn’t change, but for now, it seems that young people are responsible for the progressive party’s continued popularity.