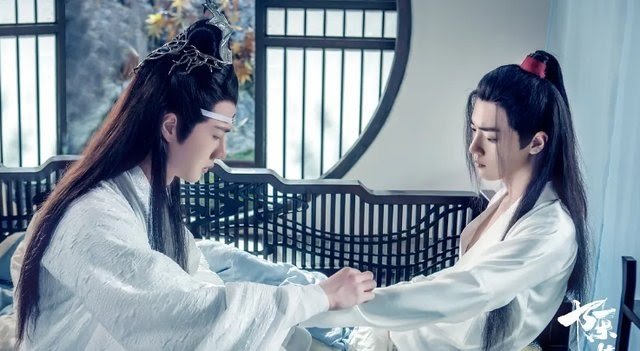 The two men huddle together, their shoulders touching, as one asks the other if he would like to light a lantern with him. The pair smile, and as one leans in reply, body language seems to imply that the two are too intimate to be just friends.

The release of “The Untamed” (陈情令),” a TV series adapted from the historical fantasy novel “Grand Master of Demonic Cultivation” (魔道祖师)”, in June 2019 marked a momentous occasion in Chinese entertainment media. Viewed over 6.9 billion times on Tencent as of December 2019 and rated 8.3 out of 10 on Douban, the TV show features the adventures of two male soulmates, Wei Wuxian and Lan Wangji, who practice the martial arts of xian/immortality (仙) throughout their journey to solve a series of mysterious murders.

The two, surprisingly, appear more than just friends. While Wei is optimistic and light-hearted, Lan is cold, strict, and distant, yet reserves a soft spot for Wei in his heart. Though Wei and Lan eventually fell in love with each other in the original online novel written by Mo Xiang Tong Xiu (墨香铜臭),  graphic depictions of homosexuality portrayed in the novel were removed from the TV series due to censorship.

While entertainment and media products with explicit homosexual themes are still unofficially banned for public screening in mainland China, it seems that the Chinese media industry has never been so open to queer fantasy and narratives in this increasingly globalized and digital age.

In many cases, the pairing up of male actors as couples has become a particularly profitable trend in the business of storytelling. In January 2016, “Addicted” (上瘾), a web-based romance drama about the romantic entanglements of two male couples, became one of the most popular shows in China before it was pulled offline a month later for its overt sexual and homosexual elements. It is estimated that a total of over 200 popular male-male romance novels will be adapted into web shows in the upcoming several years.

The widespread popularity and commercial success of these shows are inseparable from the rapidly rising danmei (耽美), or boys’ love (BL), community in China, who are not only willing to, but also have the purchasing power to consume Danmei-related media & cultural products. Literally meaning “indulgence in beauty,” Danmei refers to a genre of fanciful male-male romance stories mostly produced by and for women in Chinese contexts. The genre was initially created by a group of female Japanese manga authors in the 1970s, and later spread across East Asia and worldwide via Japanese ACG (anime, comics and games) culture. In recent years, Danmei gained popularity among fan communities in China, who gradually adapted the media into unique local forms no longer solely associated with Japanese popular culture.

Broadly, Danmei can be divided into two categories: yuandan (原耽), which focuses on original Chinese-language novels, videos and comics, and tongren (同人), which refers to fanworks of transnational media products. Fans enjoy reading and publishing Danmei works on online platforms like Jinjiang, Lofter, and Weibo, as well as going to local comic markets to buy self-published fanzines from Danmei authors and gather with those who share the same passion in BL stories. According to statistics, Jinjiang Literature City, one of the most popular online sites for BL story publication, has attracted more than 7 million registered users. A New York Times article published in 2014 even claimed that the community of BL story writers and readers was now too big to consider a subculture.

The mainstream Chinese media industry has been quick to respond to the swelling fan population by adapting popular internet boys’ love novels into web shows, extending the previously more niche BL fan base to include general internet users previously unfamiliar with the genre.

Perhaps surprising to the West, the sociological impact of Danmei fan culture is not limited to issues surrounding male-male sexual desire or the gay rights movement. In fact, the majority of frequent Danmei writers and readers are heterosexual women, rather than men. The writing, reading and sharing of boy’s love stories on different online and offline platforms provides valuable spaces for women to exercise agency and power in China’s at-times misogynistic cultural atmosphere.

The relative anonymity of the Internet, where most discussion about Danmei happens, makes young female Danmei fans feel more comfortable and safer connecting with other fans and sharing their hobby of reading male homoerotic stories, which go against the Chinese heteronormative societal ideals, as well as conservative gender values that socialize women to remain sexually reserved. Many female BL fans mention that BL stories they read online are the primary channel through which they gain knowledge of sex and homosexuality — especially since formal sexual education is somewhat lacking in China’s education system and female sexuality remains a taboo topic among their female peers before adolescence. To the eyes of researchers, Danmei carries the potential to disrupt currently stable notions of chromosomal sex, gender and sexual desire in China.

“One of the reasons why young women love to read boys’ love stories is that BL stories are stories between two guys who have the gender privilege unique to men in our society, so a lot of Danmei fans perceive that there is no gender oppression involved in their romantic relationship,” Yanyan Zhou, a scholar researching Chinese Danmei from University of Indianna Bloominton says. “Reading and producing boy’s love stories is a way for women to fight against gender inequality or gender stereotypes. However, you could also see some of the BL stories have been portrayed in a really heterosexual manner, and you wouldn’t realize the characters are actually two gay men if you change their gender to men and women. It’s all about looking at the beautiful, fleshy male bodies, in a very idealistic and unreal way.”

Indeed, some would argue that Danmei provides a highly stylized, fantacized and idealized portrayal of gay experiences, while ignoring the practical challenges faced by the LGBTQ+ community in real life. The most popular Danmei stories online, namely those that have the most hits and comments on Jinjiang Literature City, are usually stories with happy endings. In a lot of Danmei story settings, the male characters fall in love with each other just as most heterosexuals, without having to worry about social pressure from people around them. Their romantic relationship is one that has been beloved and blessed; their parents, colleagues, friends and all surrounding characters happily support the characters after their coming out. The everyday struggles and discrimination faced by marginalized sexual minorities are rarely depicted.

There is a clear distinction between popular BL stories and the notion of ‘queer literature’ (tongzhi wenxue/同志文学) written by authors such as Bai Xianyong, Mishima Yukio and Andre Aciman.

“Usually the authors of tongzhi literature have personally experienced the poignancy of being homosexual themselves,” Ji Zhang, a popular Danmei writer says. “The primary focus of tongzhi literature is not about the romantic love between the gay characters … they rather more focus on … their real, relevant struggle as sexual minorities. Danmei, however, is more about constructing an ideal expression of romantic love and sexual fantasy from a female (and often heterosexual) perspective. … Of course there have been increasingly more well-written Danmei stories that touch upon real hardship of gay community coming out recently, but at a lot of times such stories are still ‘beautiful & idealistic love stories’ at heart.”

Fighting the Elephant in the Room

Danmei offers valuable spaces for previously overlooked conversations of gender and sexuality in China, and has the potential for further exploration and disruption by fans. But there is a deeper problem that Danmei fans need to address before they even get the chance to consume these queer-influenced cultural products: participation in Danmei fandom inherently carries some risk due to stringent censorship in mainland China.

Sexual content, whether heterosexual or queer, is usually stictly regulated, and Danmei writers in China need to come up ways to publish their works on online publication platforms. Potentially risky content will be taken down by website administrators. When the plot comes to a point where sex becomes inevitable, the authors will either skip the explicit sexual depiction, or direct them to read the sex scenes on other platforms that have more flexible policies, such as Shimo (石墨),Word Press, and AO3 (Archive of Our Own). With such strict policies regulating what should or should not be posted, Danmei fans sometimes refer to sex as “the unspeakable acts below the neck” in a humourous yet poignant tone.

In Thug The Tangle, a gangster-themed Danmei novel set in 20th century San Francisco, the protagonist Lee moves to the U.S. in the aftermath of cultural revolution and later becomes a West Coast gang leader who maintains extremely violent and sexual romantic relationships with three men. Its author, Ji Zhang sheds light on the dilemma faced by many Danmei authors when trying to reconcile the balance between creative freedom and censorship at home.

“Honestly, I still can’t find the way to negotiate the balance [between] creative freedom and censorship [sic] these days,” Ji Zhang says. “It’s not that I didn’t try — I gave up publishing my works on Chinese internet and decided to publish them all on AO3 instead, just because there are so many red lines.” She admits that of course she wants her works to be seen and liked by more people on Chinese platforms, but she just can’t accept self-censorship for the sole purpose of popularity.

There were the so-called good old days, when political-themed Danmei were still popular on Chinese internet. Gaogan Wen (高干文), a Danmei genre about romantic relationships between political leaders (or sometimes their sons) in Chinese settings was especially popular among Chinese Danmei fans for a while. These novels, however, were gradually taken down, and rarely do Danmei authors write Gaogan Wen now.

“The Untamed” and its two male main characters have sparked one of the biggest controversies in the Chinese Danmei fandom this year. “Falling Down,” a Danmei novel about fictional romantic entanglements between the main male actors of the show, Wang Yibo and Xiao Zhan, went viral in the fan community. Because the novel features Xiao Zhan as a transgender prostitute, part of Xiao Zhan’s fans were furious as they thought such depictions were extremely insulting to their idol, despite the fact that “The Untamed” originally was an LGBTQ+-based work. They quickly extended their anger to AO3, the platform in which the novel was published.

The website, which has long been used by the Chinese LGBTQ+ literature community because it was not blocked in China, was reported to the government’s online regulation department. This eventually resulted in AO3 being banned by the firewall and inaccessible to all Chinese users, and triggered an internet war between Xiao Zhan’s fans and those in the queer literature fandom who are regular users of AO3. The situation worsened and got much more complex, as mainstream media and those unaccustomed Danmei fandom were involved. Individual reporting activities will likely have similar repercussions for other works, proving that unavoidably Danmei fandom must negotiate its queer fantasies in public spaces marked as normative and officially sanctioned. The future of Danmei is still uncertain.