IUDs in China: The Legacy of the One Child Policy

By Hanna TeermanDecember 13, 2021 No Comments

Shortly after Liang Wen gives birth, the 27-year-old recent mother is forced to agree to a medical procedure that permanently alters her health and future. Wen’s intrauterine device (IUD) represents the biological burden of Deng Xiaoping’s 1970s One Child Policy, which inserts itself into the most intimate aspects of her life to “ensure that the fruits of economic growth are not devoured by population growth.”

Wen’s doctor mandates that she be fitted with a 宫内节育器 (Gōng nèi jiéyù qì) through a surgical procedure called 双环 (Shuānghuán). Though she does not want the procedure, Wen’s only other option is tubal ligation, a procedure that prevents her from ever having a second child. If she declines either procedure, her child is subject to being denied from public schools, and Wen risks her health insurance and vocation being stripped away.

A few weeks later, the doctor implants a single-ring, stainless steel IUD, a cost-effective contraceptive mass-produced in China. Wen is not only barred from conceiving again, but she also is unable to opt-out of the single-ring IUD, which has a higher failure and expulsion rate than Western IUDs. She is never advised of the risks by her doctors or the Chinese Communist Party, who mandates the procedure.

Most IUDs are designed to remain implanted for three to nine years. IUDs implanted during the One-Child Policy, though, were designed to last 10+ years, often remaining unreplaced for up to 20 years. Most womens’ doctors do not disclose that the IUD has the potential to curb fertility permanently. Due to faulty IUD design and poor hygiene practices, many women were forced to undergo hysterectomies when botched IUDs caused uterine inflammation. Thousands of women were never made aware of the cascade of biological, physical, and psychological implications that the IUDs would impose on their lives.

The current state of the IUD in China

Though Liang Wen is not a real individual, her story resembles the experiences of thousands of women who suffered medical issues from a botched IUD. Fu-Xian Yi, an obstetrics and gynecology professor at the University of Wisconsin-Madison and author of “Big Country with an Empty Nest,” states that forced abortion, sterilizations, selective abortion of female fetuses and increased suicide rates were all effects of IUD mandates during the One-Child Policy.

According to Yi, “women were the main percentage that carried the [CCP] policy [of] prevention first, birth control first,” a tactic meant to facilitate Deng’s domestic economic goals. Yi emphasized that when “the government wanted to control [the population] they forced women to have IUDs,” which in turn made it very “efficient to reduce the birth and fertility rate.”

China’s Ministry of Health states that approximately 286 million women were fitted with IUDs between 1980 and 2009.

The IUD left a legacy in China that still influences women and their reproductive choices. For some women, the legacy of the IUD was tangible — it functioned as an act of quasi-mutilation and infringed on their reproductive rights. For others, who witnessed their friends’ and relatives’ negative experiences, it shaped a culture of reluctance toward IUD usage and contributed to China’s preference for another form of contraception — condoms.

In the United States, more women are delaying marriage and foregoing childbirth. To avoid pregnancy, more and more American women are opting for the IUD, which has a 99 percent efficacy rate. In China, women are also increasingly foregoing having children and delaying marriage, but IUDs are much less popular. 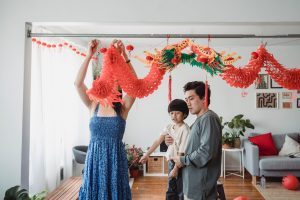 In May of 2021, the National People’s Congress passed the Three-Child Policy to increase the birth rate. They also passed resolutions to reduce the cost of education and childcare. “Even though we have the Three-Child Policy, many women, especially the high educational level women, do not want children,” says Jinxu Li, a graduate student at Texas A&M University who grew up in China.

However, despite declining birth and marriage rates, and although the IUD is reputable for its efficacy, demand for IUDs remains low. Wenxue Zhou, a Ph.D. student at Texas A&M who also grew up in China, says that “for young women, we are afraid of inserting something in our bodies… we feel unsafe. They [women] depend on their partners to take action. Their partners will use condoms.”

Each year, China purchases and distributes about 1 billion condoms and is expanding its condom market and outreach. “When I was in middle school there was a booth that would sell condoms,” Zhou says. Li mentioned her observation that over recent years, the “Chinese Health Government does many efforts to promote healthy sex education.”

The condom surges in popularity, partially because of their perceived safety compared to IUDs and birth control pills. Zhou and Li maintain that IUDs remain a popular choice only among rural and older women who don’t want children. “My mother and father won’t use condoms,” says Zhou. “Age is the key point… If they’re Generation X they will not use condoms…[they] will most likely use IUD.”

“In Xinjiang, [family planning and IUDs] really started in the 2000s, and that’s when they really started to implement and enforce these regulations on Uighur women,” says Darren Byler, professor of International Studies at Simon Fraser University. However, in 2017, the state increased its forced contraception efforts by launching the “Eliminate All Illegal Births Campaign” for the Uighur population.

In Xinjiang, the Chinese government has a trustworthy and untrustworthy list that determines who will be sent to an internment camp.

“In order to be determined as trustworthy, all Uighur women of childbearing age must have long-term birth control, which means an IUD or sterilization,” Byler says.

The CCP’s grasp on Uighur women doesn’t end once women get an IUD. Even women deemed “trustworthy” are required to undergo quarterly check-ups to ensure the IUD is still implanted. “If you’re an untrustworthy person, or an average person [who hasn’t had an IUD installed], then you have to have monthly gynecological checks,” Byler says.

During the One-Child Policy, frequent faulty design and implementation was a leading cause of IUD-related trauma.  Thirty years later, albeit for a vulnerable minority of the population, this fact has not changed.

“Some [Uighur] women I’ve interviewed who’ve had an IUD implanted talked about how painful it was… it was a traumatic experience for them,”  Byler says.

The targeted eugenics campaign has resulted in a significant population decrease in Xinjiang. “Some birth drops have been 80 percent, and in other places, it’s 50 percent. We also see for the first time that Uighur population growth is now negative,” Byler says.

The One-Child Policy was centered around preserving economic growth, while the Eliminate All Illegal Births Campaign is centered around control and eradication of the Uighur population. Despite differing policy goals, one variable remains fixed: women as unconsenting labor units of the state’s goals.

“There’s a kind of paternalism that’s built into this… Women need to be made to do what the state wants them to do,” Byler says.