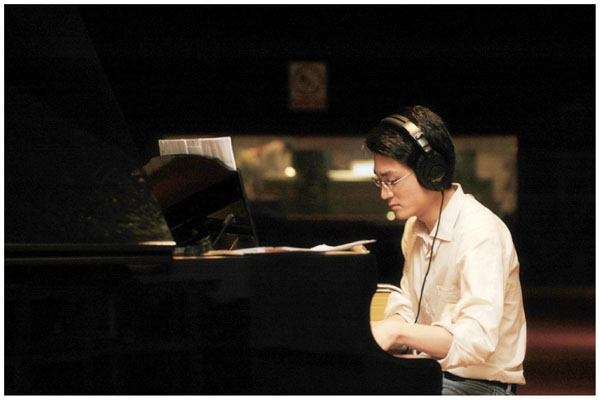 Composer Zhou Tian’s symphonic suite, “Grand Canal,”(《中国大运河》交响组曲) was performed during a nationally televised celebration of the 60th anniversary of the founding of the People’s Republic of China, and selected as a theme at 2010 Shanghai World Expo. The work made its U.S. premiere with the Princeton Symphonic Orchestra last month.

Please tell us a little bit about yourself.

I was born in Hangzhou, China in 1981 into a music family. My father is a composer and violinist working for the Television and media industry in China. After failing from learning violin with my dad (it just didn’t work), I started learning piano at 7 and later switched to composition. In 2001, I came to the U.S. to study composition at the Curtis Institute of Music in Philadelphia and later at the Juilliard School in New York. I then got my doctoral’s degree from the Thornton School of Music at USC. I now serve as an assistant professor for the Colgate University.

What drew you to composition?

It wasn’t a big conscious decision. Due to my dad’s work, I was surrounded by musicians of all kinds when I young. There was never a big separation between creating and performing.

My dad never planned for me to become a professional musician. He wanted me to just get some musical education so that I could appreciate music. My focus in composition started when I entered the middle school and high school affiliated with the Shanghai conservatory when I was 13. There, I was surrounded by talented young musicians from all over China, many of them child prodigies in piano and string instruments.

The decision of choosing composition as my career came when my first string quartet premiered in 2000. After that I realized I can write something that I genuinely like and have other people appreciate it as well. I was 18 years old. 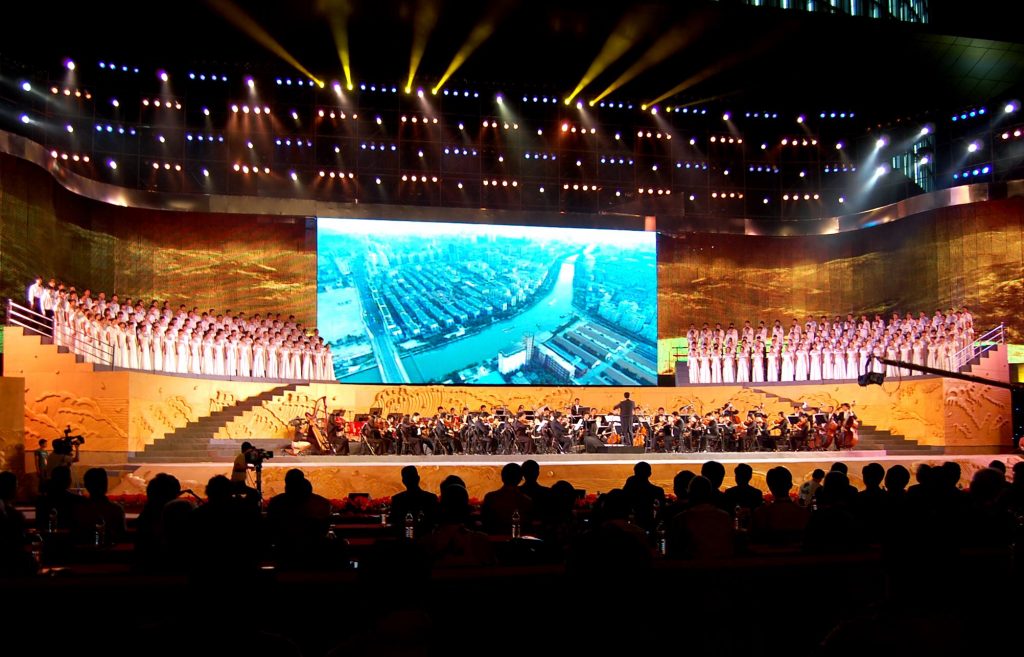 From a performance of The Grand Canal by Hangzhou Philharmonic Orchestra Hangzhou, China (2009) ©www.ZhouTian.org

Yes, but I try not to intentionally do that. As a composer, I believe in music first, and all cultural references should come naturally.

I want people to accept my works as musical pieces first, before seeing them as something from another culture. My goal is to convey a sense of mosaic of cultures through music.

In general, I don’t plan Chinese elements in my music. I believe it should be naturally expressed, and I think it will be since I am Chinese!

What were some pivotal moments that solidified your musical identity while studying at the Shanghai Conservatory, Juilliard and USC?

There’s nothing more rewarding to a composer than to go hear your performance, a premiere or even a first rehearsal of his work. I’ve been very fortunate to have many memorable performances. For example, while I was studying at USC, the Indianapolis Symphony performed my “A Thousand Years of Good Prayers” and I received a standing ovation. The premiere of my first string quartet was important, and so were the recent performances by the Houston Symphony, Hong Kong Philharmonic and Princeton Symphony. Performances near my family in China are always special and meaningful, too. Recently, my second string quartet was performed by the Great Wall Quartet in Macau, Hong Kong, Taipei and Beijing, while my Piano Trio was performed in Shanghai and Tianjin.

I consider myself extremely fortunate having been able to study privately with some of the most recognized American composers, such as Jennifer Higdon (at Curtis), Christopher Rouse (at Juilliard), Stephan Hartke and Don Crockett (at USC). Each one of these teachers brought something special to the weekly lessons. And these weeks added up to 10 years of wonderful education in the US.

Which composers have most influenced your work?

Definitely those teachers that I previously mentioned. American music has influenced me heavily. Outside of that, I’m very fond of French composers, such as Debussy, Ravel, Messiaen and more modern ones like Boulez. I’m always very drawn to their ideas, perhaps because they’re among the first classical composers to adopt Asian cultures. Debussy and Ravel were influenced by Asian cultures at the turn of the 20th century. As a composer, it’s interesting to hear Western composers using Asian elements, because I’m also doing the same thing. I’m adopting American culture and combining it with my own Asian heritage.

What made you choose the specific Chinese instruments in your piece the Grand Canal?

As a composer one of the most interesting things about composing such as a piece is that I get to incorporate traditional Chinese musical elements that are related to the culture of Grand Canal and mix it with a Western symphony orchestra.

Because the Grand Canal is man-made through generations of workers, it is about people as it is about its beauty. One of the signature sounds that relates to GC is the early boatmen’s chant. It has a particular rhythm and rhyme, which inspired me to incorporate it in the choir at the beginning of the piece.

Another source of inspiration came from hearing the Chinese opera in the style of Yue Ju. Chinese operas has several major styles of performance, and two of the most popular are Jing Ju (Beijing opera), where the grand canal starts and Yue Ju (Southern/Zhejiang opera), where the grand canal ends. The two Chinese opera styles sound vastly different: Beijing opera is full of drama with fierce energy, while Yue Ju is the most romantic and softest of all Chinese opera – yet the two are connected by the Grand Canal (at 1,100 miles apart). I chose to feature a Yue Ju narrator in this piece because it is the Chinese opera I grew up with. Hangzhou, my hometown, is the home of this operatic style. Although it is a part for “narrator,” the words are “spoken” in such a traditional way that Chinese would find it foreign. Just like the boatmen’s chant, it’s the musical rhyme that interests me and it became an instrument of sound in this piece.

In general, do you consider Eastern music as being less structured than the West?

In general, yes. Traditional Chinese music never really developed a full music theory system, and as a result, many instruments remain highly soloistic. You rarely hear 30 Erhus playing together. This is different from Western symphonic music, in which instruments are played together to form a unified sound. To achieve that you need a lot of music theory as a backbone. Everyone needs to understand when and how you have to come in, and how loud you have to play. In traditional Chinese music this is rarely emphasized. Today, Erhu players can read Western notation, however, the style of performance remains traditional.

How did the Grand Canal become commissioned to you?

Members of the Federation heard my music when the Pittsburgh Youth Symphony performed my work during its China concert tour, and decided to commission the piece. 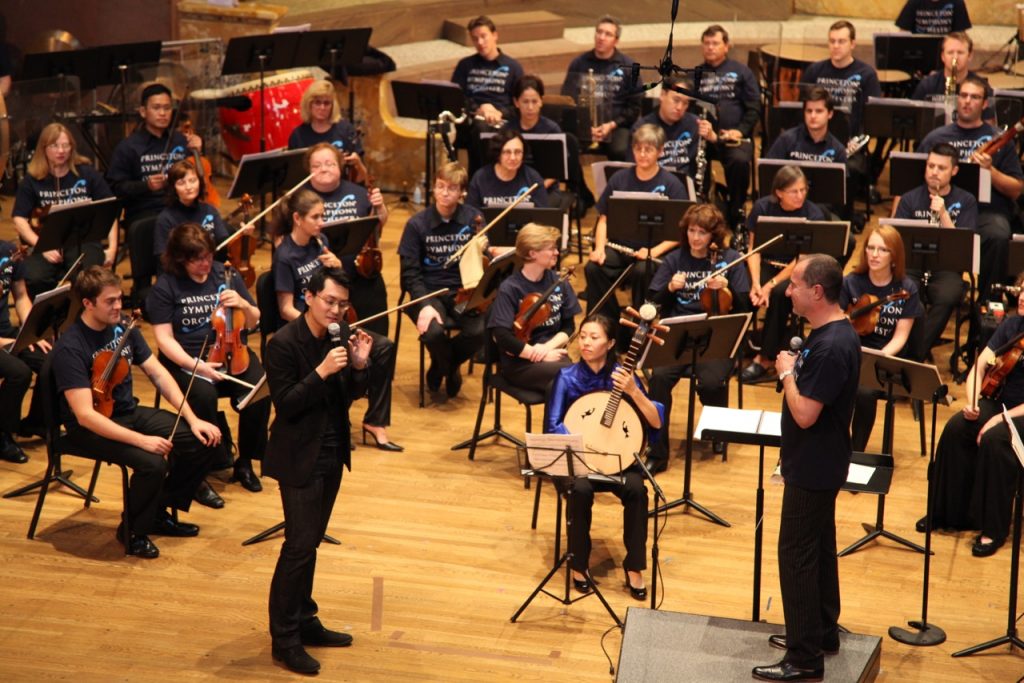 How do you compose music?

I’m a very intuitive writer. I sit down and come out with little motifs. Sometimes these don’t get used and sometimes they get incorporated 30 minutes later into the piece. I don’t use a specific system to compose music. Especially for a piece like the Grand Canal, I believe should be intuitively received and created so I just let the music come to me.

What are your plans for the future?

I’m going to continue being a composer and a teacher. I really enjoy teaching. Being able to help other composers is a very rewarding experience. As a composer, I’m writing more pieces in the US and in China. The China Federation of Literary and Art Circles decided to commission another piece called Poems from the Song Dynasty because the Grand Canal was so well received. The recording of that piece was just released in China 15 days ago. Here in the US I’m working on a commission from the Cincinnati Symphony Orchestra to be premiere in March, 2013.

I’m doing more to promote cultural exchanges between the US and China. The US premiere of the Grand Canal at Princeton University introduced the Grand Canal to a whole new audience. It’s my hope and passion to have my music as a bridge of differences to audiences in both countries.

More about composer Zhou Tian and his works can be found here: www.ZhouTianMusic.com