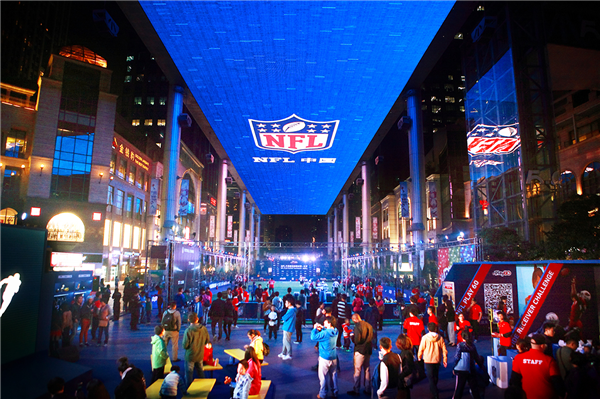 With an arsenal of marketing techniques, Stephanie Hsiao is spreading American football fever in mainland China with the NFL.

For most Americans, watching football means dressing up in your team’s jersey, applying spirited face paint, and joining a tailgate with family and friends. However, in China, watching a game means something else entirely. In order to catch a live game, football fans in China must wake up while it’s still dark or stay up late in the night — not the most appealing prospect. But recently, a growing number of diehard American football fans have emerged in China and are willing to sacrifice their sleep for the sake of the game. According to a report by Germany-based Repucom, interest in American football in China has surged from 1.7 to 7.9 percent since 2013, about 31 million more people. The National Football League (NFL) has rapidly expanded in China, creating a new outpost of the brand to go with those established in Canada, Japan, Germany, Mexico, and the United Kingdom. Even though basketball, badminton, and ping-pong still dominate the Chinese sports scene, the NFL is working to create an American football presence in China. US-China Today recently spoke with Stephanie Hsiao, marketing director of NFL China, to talk about the story of the league in China, from branding strategies to issues of counterfeiting, and the league’s plans for the future. 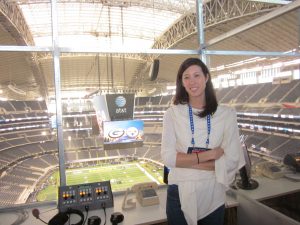 What sparked the NFL’s interest in China?

The NFL has been such a success in the U.S. and international expansion has always kind of been on their minds. Obviously, the NFL owners are quite forward-thinking so they knew they wanted to expand internationally, which is why they set up the NFL International Department. I think the NFL realized if you want to grow your business you have to think internationally—if you want to grow your U.S. business, you have to look outside of U.S. borders. Therefore, the company expanded to China, and I would say in the recent years we’ve seen significant growth.

In terms of marketing, what are the differences between connecting with fans in the U.S. versus China?

In terms of marketing, I think in the U.S., people rely a lot on Facebook or Twitter and even YouTube to get content out, whereas all those platforms are blocked in China. In China you have kind of similar platforms but they are all Chinese-based. Instead of YouTube, we have Youku and TuDou, and instead of Twitter, we have Sina Weibo. And then of course we have WeChat, which is a whole different animal that kind of does all of those things. So as NFL China, we really kind of leverage the local platforms here to engage with our fans. For Chinese fans primarily, social media wise, we focus on Sina Weibo and WeChat as our primary social media platforms. In terms of broadcast, given the time change, live games come in Monday morning, Tuesday morning in China while in the U.S. it is Sunday night, Monday night, and Friday night football. Therefore, we focus a lot more on digital platforms. We’re partnering with local broadcast companies so they can air all the live games coming in from the U.S., which is good as we can make sure we get games in front of fans. In terms of just general marketing, I think that in the U.S., everyone has some sort of basic understanding of football, whereas in China we kind of have to take a step back and say…there’s no history of the sport here, so how do we educate people on American football? So I think of a lot what we do is create content that is catered to avid fans and also for beginners. We have to play that balance to satisfy the avid fans as well as making sure we’re creating content that will also draw in casual and potential fans as well.

Who is the most popular NFL player in China? Why is he so popular?

I think it’s a tough one because there’s a small sample size. In the history of NFL players of Chinese descent, I mean, really Ed Wang is the only option. There certainly are other players like Patrick Chung, who is a quarter Chinese, and there have been Asian players in the past, but Ed Wang is the most recent and potentially the most visible. I mean, certainly people in China know of him, and I think that’s because he is the pioneer—the first NFL player of full Chinese descent, so there was quite a bit of news when he was drafted.

What are some of the challenges you face in promoting football in China? 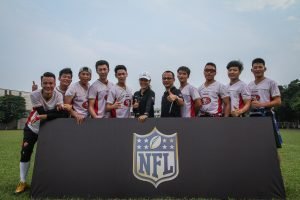 One is the time difference. Of our target audience, the amount of people who are at home or in front of the TV on Friday morning, Monday morning, or Tuesday morning, is quite low, which is the reason why we shifted our strategy digitally and we find ways to kind of work with that time difference. So that’s whether we make clips available online, or making games available on-demand. The second key barrier is “how do we make football socially relevant?” In the U.S. whether you’re an avid fan or not, it is going to be the talk people have at the water cooler versus here in China it is not yet at that socially relevant level.

How is NFL China funded?

Like the other NFL international branches, we are all funded by NFL headquarters in New York, so if you think about it, part of the NFL budget is to allocate a certain amount to international growth, which is given to NFL China. We also work with global sponsors and partners. So you know there’s certainly a number of sponsors in the U.S., for instance VISA, Budweiser, Microsoft, and Bose, that have global rights and that also have bases in China, so we partner up with them. We also have a number of local sponsors, one of them being Nike. We work with Nike China primarily on our grassroots and on ground marketing.

Have you encountered any issues with counterfeit merchandise and what are your plans of handling it in the future?

We have a great IP team that is based out of New York as well. We do encounter a lot of counterfeit merchandise, not just for our league but for all major leagues. We work with local councils here in China as well and really it’s a partnership with the Public Security Bureau and with local authorities here to make sure that they are able to identify what is counterfeit and what is not. And then being able to stop that right from the border before it even gets sent to the U.S. Especially around Super Bowl time, we hear about instances where the U.S. stops shipments before they arrive, or in China, stopping shipments before they leave China. Certainly in China, we’ve seen an increase in that lately, so I think that is something that the teams on both sides of the pond are certainly working on.

A talk by Frank Lavin, who heads the company which put the NFL’s store up on Taobao.

How do sports excite people in China? Are Chinese sports fans similar to sports fans in the U.S.?

The role of sports should be looked at in two ways. What sports are popular in terms of TV audience and what sports are popular in terms of participation? And I would say if you’re looking at participation, there’s ping pong, badminton, which are kind of the more leisure sports. You see a lot of people who play soccer and basketball. I would say in terms of overall sports popularity, soccer and basketball are the number one and two in China. Historically, you look at Chinese sports and it’s very much a nationalistic view. China, for the most part has seen sports through the lens of nationalism. Only very recently have we started to see a shift away from seeing sports as a nationalistic pursuit. I think there is a lot of room and a lot of development for the general idea of sports—a leisure pursuit. I think a lot of Chinese parents, in the past and still now, focus on a good education and make sure their child is studying. They see sports as something that will pull them away from their studies. Whereas now, we’re starting to see a slow shift in thinking, and people aren’t associating sports as a negative thing, but [activities that] actually help develop their mind in different ways.

What are NFL China’s plans for the future?

In China, we want to continue moving the needle, continue developing new fans as well as continue engaging with our existing fan base, and to grow that avid fan base as well as that casual fan base.