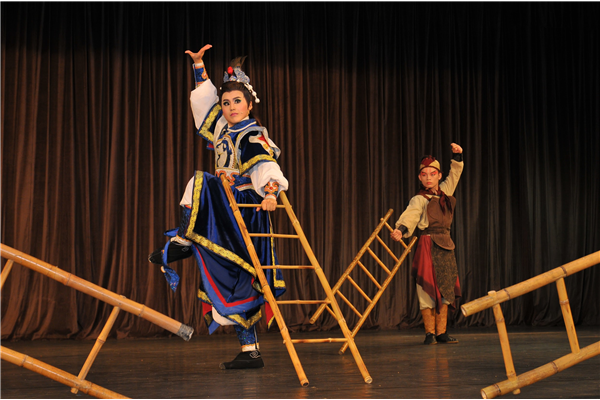 Audiences in Los Angeles recently had the opportunity to experience the artistry of Ming Hwa Yuan (明華園), one of the most famous and representative Taiwanese opera or Gezaixi (歌仔戲) groups. Established in 1929, Ming Hwa Yuan features avant-garde performances that mix traditional heritage and modern technique. Its distinct blend of music, theatre, martial arts, dancing, and traditional art forms has become a hallmark of Taiwanese opera. To mark the 105th National Day of the Republic of China (Taiwan), Ming Hwa Yuan toured the United States with a combination opera:  “Hero Beauty,” (英雄.佳人) directed by the famed director and “first actor” of Taiwanese opera, Shun Chui Fung (孫翠鳳). In an effort to learn about the performance and Taiwan’s contemporary approach to cultivating soft power in America, US-China Today interviewed Shun Chui Fung and Bill Su-pao Chang, director of the Taiwan Academy, an organization that enhances cultural exchange between Taiwan and the international community.

A scene from the opera “General of the Empire.”

Is there a particular subject or theme you focus on in the opera “Hero Beauty”? What can you tell our readers about this production?Interview with Shun Chui Fung

There are two parts in this opera, which are completely different from each other. The first part is called “Lovebird’s Spears” (鴛鴦槍), it’s a romantic comedy in which you can feel the loveliness, kindness, and liveliness of the Taiwanese. Many representative characters of Gezaixi are shown in the play, including a clown, men played by women, and women played by men. Cross-gender acting is one of the most prominent elements in Gezaixi, and of course one of the audience’s favorite parts. Therefore, in “Lovebird’s Spears,” we have the cross-gender castings and a cute clown to bring joy to the audience and to celebrate National Day.

The second play, “General of the Empire” (護國將軍),is a war play that demonstrates the traditional martial arts of Gezaixi. You can see the professionals somersault and use stair-like weapons, which are specifically designed by Ming Hwa Yuan. While stairs were used as climbing tools in the past, we use them as weapons to defeat the enemies in the play. Therefore, we show a heroic general who protects his country and sees the enemy’s strategies wisely. We want to make everybody happy by seeing the opera as a whole.

What do you hope to bring to audiences with this performance?

Overseas Taiwanese have not had the opportunity to see traditional Taiwanese opera for many years. Through the first play that we are going to perform, they would definitely find that the opera they had seen growing up has now become an internationally known art. They will be proud of the improvements of Gezaixi and, of course, their homeland. Audiences will also see our advanced martial arts in the second play, and we’re more than happy to show them the great progress in our martial skills.

How did you become involved with this event? What motivated you to work with Ming Hwa Yuan?

The Taiwanese government chose to bring Ming Hwa Yuan to the United States and give performances in major cities. We spent a lot of time and worked hard to make this traveling performance possible. 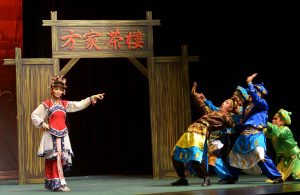 In “Lovebird’s Spears,” Miss Gao fights with potential suitors, saying the winner can be her husband.

Gezaixi is one of the most representative arts of Taiwan. How do you think the performance will resonate with Taiwanese abroad?

Taiwanese in the United States need to have more pride of their own cultures, and this event can help achieve this goal. Gezaixi shows them that Taiwan has such an outstanding culture and one that can represent the Taiwanese.

Is there a particular group of people that you are focusing on promoting the Taiwanese culture to?

Our strategy is to focus on promoting the event to the local elites working in the fields of politics, economics, arts, and so on. We hope to introduce the traditional Taiwanese arts and cultures to them.

What challenges do you face in spreading Taiwanese culture to a Western environment?

With many of the Taiwanese events and projects [held in the western society], the first problem to be considered is language. The reason that we are welcomed by the Western culture is that we don’t have a language barrier. [This is because] the arts are transnational, and we usually use new technologies, such as new media [computers and Internet communications], that are highly accepted in a Western environment to shorten the communication gap. There will be more creative ideas as future Taiwanese generations continue to work on this area, and this is exactly what we want.

What do you hope to achieve through holding and promoting this event?

Primarily, we hope that overseas Taiwanese are able to watch a real Gezaixi show on this special National Day. Secondly, we hope to introduce the Taiwanese culture to the mainstream society in the United States. If these two goals are achieved, then this event will be successful. In the future, we’re going to hold and promote more events in the States. The power and influence of cultural communication is so great and strong. People from different countries and cultures present themselves in a different environment. We learn a lot from this.

I’ve mentioned that we would basically like to collaborate more with mainstream Americans, who would bring around 70% of the local people [to our events]. Of course, spreading Taiwan’s soft power depends on different purposes and strategies. In the future, we’re going to hold more events that we’d like to have reach American audiences. In fact, we have many ideas for cultural communication.  Yet once it comes to the business side, it’s a different story. For example, if Taiwanese artists want to sell their works here in Los Angeles, there’s another strategy. 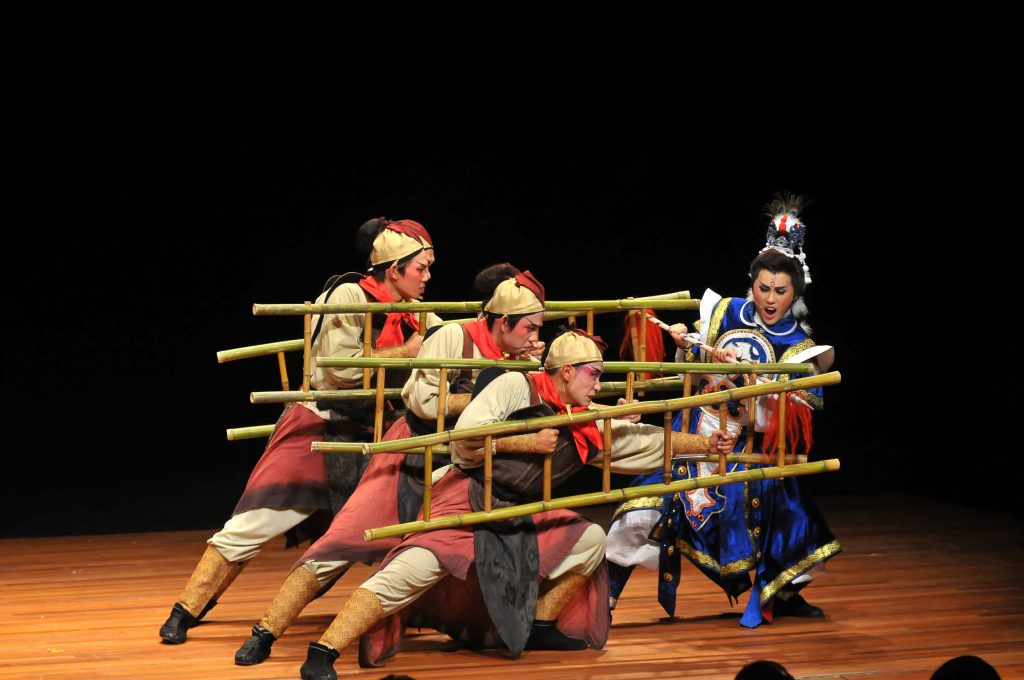 A battle scene from “General of the Empire.”

What advice do you have for those interested in getting involved with intercultural communications?

Now is exactly the time for more people to enter this industry. There are two reasons. First, rapid globalization allows more intercultural communication and appreciation. You can see representations of foreign cultures displayed through various forms in almost every city in the world. It was not that common in the past because of inconvenient transportation and underdevelopment. However, we’re now done exploring and adventuring, and are now focused on discovering different cultures. We used to only listen to classical musicians such as Beethoven, Mozart, and Bach, but people cannot forget that there are more than 200 kinds of music. Therefore, more people, including average Americans, begin to find satisfaction when appreciating foreign cultures.

Based on this background, there are a lot of opportunities in intercultural communication, especially for those who can speak two or more languages. For example, during today’s event, you can see the performers and staff from the theater. These staff actually earn stable incomes that are sometimes more than the performers’. They are examples of people working in intercultural communication, and their numbers keep increasing. Jobs such as marketing, selling, and translating are also very important. But what I want to say is that this is not an easy job. This is not the case where you can just watch shows or stay with the artists. It would be very difficult and challenging; it’s not romantic at all.