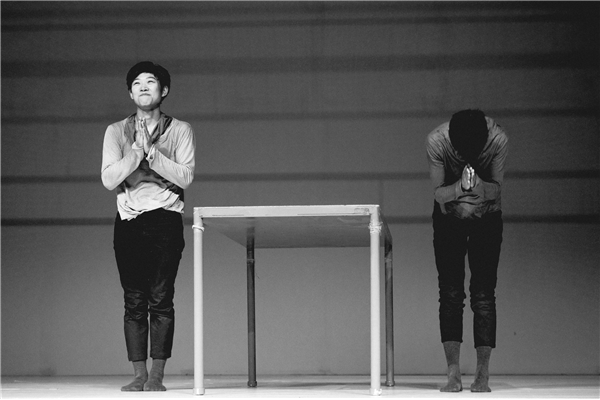 US-China Today spoke with Gu Jiani about the intention behind “Right & Left,” its creative evolution and the questions it poses.

The theater was silent, except for two dancers’ heavy breathing. Their clothes were soaked in sweat, their bodies unyielding despite the visible and tangible intensity of their movement. This summer, Beijing-based choreographer Gu Jiani performed her work “Right & Left” with duet partner Wang Xuanqi in Los Angeles. The piece alternates between fluid unison sections, powerful partnering work and athletic floor choreography, and incorporates innovative use of props, as well as projection done by Ah Ping, described as the “invisible third dancer.” US-China Today spoke with Gu about the intention behind “Right & Left,” its evolution and the questions it poses through translator Alison Friedman, director of Ping Pong Productions, the organization that arranged Gu’s U.S. tour.

What was your artistic intention in creating ‘Right & Left’? What were things that were important to you as you were creating it or things you hope the audience takes away from it? 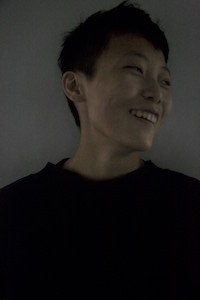 ‘Right & Left’ questions living and our life. I use two dancers and a live projection artist to explore the balance and off-balance of force. I started the creation process in 2014 and it premiered in 2015 formally.

From the name, you yi zuo yi or “one right one left,” initially you might be thinking of positions in space on the left or the right. But actually also this is really looking at a relationship of two people and the kinds of forces that they play on each other. For example, if one is giving care to the other, but this care exceeds generosity and becomes a kind of selfish care, that tips the balance and then suddenly something that’s caring actually becomes quite destructive. And so it’s looking at where is that balance, that tipping point between the balance of giving and receiving care and then to where it becomes too much and causes something… the opposite of what was intended.

I’m taking the relationship of two people and putting it larger onstage and what that allows for the audience to take away… on the one hand it might be just removing from life the relationship of two people, but it creates for an audience in many ways a mirror to themselves, that perhaps what they’re seeing isn’t a story… isn’t something about two people, but it’s perhaps the two sides of their own inner life. And so what they’re seeing reflected in front of them might not actually be something external, but something that’s revealing to them different sides of themselves or the kinds of conflicts and things that exist within.

You mentioned that this version of the piece for this tour has a few changes. What are those changes and what’s the reasoning behind them?

With this version, there’s a new dancer performing in it and this new dancer actually looks quite a bit like me and in terms of the characteristics and movement qualities is much more similar to me than the previous one was. And so that opens up new levels of meaning where it could be understood as two sides of one person. And with both the last dancer and this dancer, they’re both women and I’m looking to explore something that transcends gender so that’s why it’s not about two different genders onstage. The piece is really about transcending something much more universal than that. The piece has so many layers of subtleties, if even one changes the whole piece changes.

Can you elaborate on the transcendence of gender and the possibility of interpreting the piece as two sides of the same person rather than two individuals?

In this work, I use some props that are very familiar and standard, but by using these props in various approaches, I explore the multiple ways people understand and classify relationships and attributes to these things. By employing two dancers of the same sex and similar figures, I turn the focus away from the appearance of the dancers and highlight the underlying humanity that is often hidden. The audience can see the two dancers as two females, as two aspects of a person’s psyche, or as something else altogether. This is an arrangement I’m not trying to set or direct for the audience. If, through a gender-neutral representation, the audience can witness the energy beyond human bodies, then my work has allowed a grander discovery. So, I try not to specify gender.

Would you say that this piece is representative of your work as a whole? How would you describe your work? Are there elements that distinguish you as a choreographer and is this similar to older pieces or not? 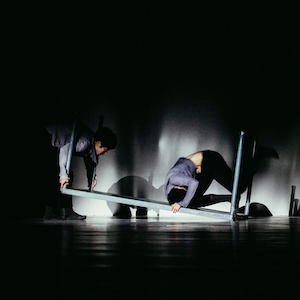 A performance of “Right & Left” by Gu Jiani and Wang Xuanqi. Courtesy of Li Xiaocao

First, yes I guess you could say that I have a certain aesthetic quality or aesthetic perspective that each person has, and for that you’d have to come see the show to see what it is, but in terms of the way I construct pieces it’s very much like constructing architecture. From the physical quality and the physical movement, the movement vocabulary, that would be like the iron structure of a house, the metal framework.

Another element that’s of great interest to me in my work is looking at the most basic elements that we encounter in our daily life — whether it’s a stool, a table, pillows — we encounter them every day and we physically interact with them every day, so what do these physical, non-living things bring to our physical body? These physical elements, these physical objects, how do they affect our lives and how do we then affect back on them? This leads me to the next layer of my creation, which is I always ask a question about life and living. In talking about the physical elements of our lives, in some ways they’re like vessels, or they’re elements that connect us with the things that we’re living. And they carry a certain element of life with them, as well, and in them just by the sheer fact that they’re interacting with living beings. Like a cell phone — maybe when it’s flat it’s a boat, when it’s lifted up it’s a wall, when it’s on its corner it’s a mountain or something.

You refer to central questions that you address in ‘Right & Left,’ and that you’d like the audience to think about in their own lives. What, specifically, are these questions?

It’s simple — what’s going on in a person’s mind and what one actually goes about are generally inconsistent. How to freely attribute energy is easier said than done… Knowing how to do something and being capable of doing it are two different things. These questions are brought about by life itself. They must be discovered through recognition, and recognized through discovery. It’s a lesson for life.

So as you’ve toured ‘Right & Left’ around the world, how has the reception been different at home in China versus abroad, in the U.S. and elsewhere?

To be honest, there hasn’t really been a big difference depending on where we’ve performed it abroad or within China. It was created in China and it was performed a couple times in its early days in China, but then it immediately was really performed more often abroad. Audiences have very individual and very personal and very strong responses to it and it doesn’t matter which country we’re in or which audience it is. I think perhaps that’s because the questions I’m asking in my works are the kinds of questions that are going to affect each individual in their own lives.

This piece is really about the psychological inner life of the dancer on the stage and it’s about very much being in the moment and what’s going on, so what’s happening in the moment of the dancer on the stage, their own honest, real truth is going to affect the audience and their response to that is going to be equally honest and real. And so it’s that kind of exchange that happens in each moment in real time transferred from the dancer to the audience. So I don’t think that there’s any kind of difference, you know, East or West audience reaction, it’s really about is the piece strong enough, are the performers strong enough to move the audience individually in each moment.