By Chelsea MasonJanuary 23, 2008 No Comments

A tour of the U.S. by a western rendition of the Chinese opera “Farewell My Concubine” is sparking interest.

On a Sunday afternoon in Pasadena, California, the curtain rises on a new opera. The orchestra strikes into an overture. The company appears; the hero takes center stage; and they all begin to sing.

The China National Opera House’s production of “Farewell My Concubine” is part of a growing trend blending Eastern and Western theatrical traditions. In this case, a traditional Beijing opera is transformed into the Western operatic tradition. Performed entirely in Mandarin Chinese, this opera opened in Beijing in October 2007 and is currently touring the United States.

B.J. Fan, an audience member of Chinese origin, said he was moved by the January 20 performance. “This is a story that is known in every Chinese family,” he said. “I enjoyed it very much.” 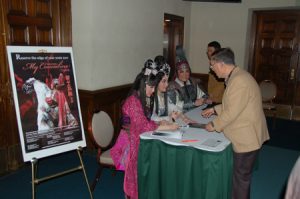 The cast autographs programs after the show. Photo by John dePerzel.

His friend Mickey Luckman agreed. “When I heard it was going to be in Mandarin, I wasn’t sure I’d like it,” she said. “But I think the singing, the staging and costumes are all unbelievable.”

The story is indeed a classic in China: set at the end of the Qin dynasty (about 200 BCE), the traditional opera tells the story of Xiang Yu, the heroic Chu general who led the Chu ethnic group to victory over the Qin. But in his victory celebration, Xiang does not focus on establishing peace in his new empire, despite the warnings of Han Xin, another Chu general. The two have a bitter argument and part ways.

Three years later, Han Xin has become the general of the Han and is fighting against Xiang Yu. On the eve of a battle where the Han were sure to win, Han Xin plans to save his old friend along with Xiang Yu’s concubine Yu Ji despite their argument years ago. Xiang Yu refuses rescue, and Yu Ji, knowing her lover’s passing is imminent, kills herself to be with him in death. The story closes with Xiang Yu’s own suicide and the company singing his praises.

But bringing this traditional Beijing opera to the Western stage was no easy task. Composer Xiao Bai never expected to see it performed after working on it for 18 years, but his student and eventual producer of the opera, Emily Kuo Vong, had other ideas. 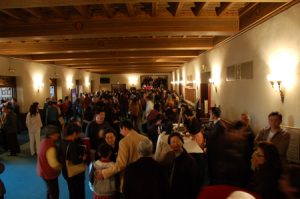 “In 2006, I went to China to meet my teacher,” she said. “We talked lots about the opera, and he told me he was always doing European opera. He really loved it so he composed this one–it’s a lovely story, and very famous. When I received his score, it was so beautiful I told him I would help him bring it to the stage.”

Vong then set out to find a performance space in Beijing, and in October 2007, the opera premiered in the China National Opera House. It was such a success that Vong then created the Chinese American Inter-Cultural Exchange Foundation, which sponsored the U.S. tour.

Despite time constraints, Vong has been pleased with the American response to the tour. While most opera houses are booked and sell season tickets years in advance, “Farewell My Concubine” had only two months to find performance space and advertise.

“We’re touring six U.S. cities, and in some places, a concert hall was the only thing available,” he said. “It’s very challenging to book the opera house less than two years in advance. I just wanted people to understand our version of the opera and to teach the people about the Chinese culture.” 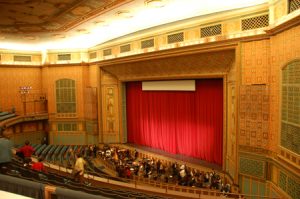 The director, Cao Qijing, also said he was encouraged. “This is a very interesting work for me,” he said. “The Western and Eastern cultural exchange is important to me. I wanted to show the Americans Chinese opera. I feel they have understood it.”

East-meets-West theater has taken off in the reverse as well. The Taiwanese Contemporary Legend Theater toured the U.S. last year, presenting, among other shows, a Chinese opera adaptation of “King Lear.” Founded in 1986, the Contemporary Legend Theater company became known for its performances of well-known Western plays, including Shakespeare’s “Macbeth” and Samuel Beckett’s “Waiting for Godot.”

Ultimately, this cross-cultural exchange is creating an entirely new genre of theater that is taking off in U.S. theater as well. At the University of Notre Dame, the Film, Television and Theater department produced a student production of Oscar Wilde’s “Salome” done in the traditional Japanese Kabuki-style in 2006.

“I realized that the play could be open to receive the controlled spectacle of gest [a notable story] and word which is the essence of Kabuki,” said Anton Juan, director of “Salome” and professor of Film, Television and Theater at the University of Notre Dame.

While this new trend in theater is just beginning, audiences have been receptive. “I think the East-West theater is such a good idea,” Vong said. “It belongs to the audience.”

Chelsea Mason is a Master’s candidate in East Asian Studies at the University of Southern California.