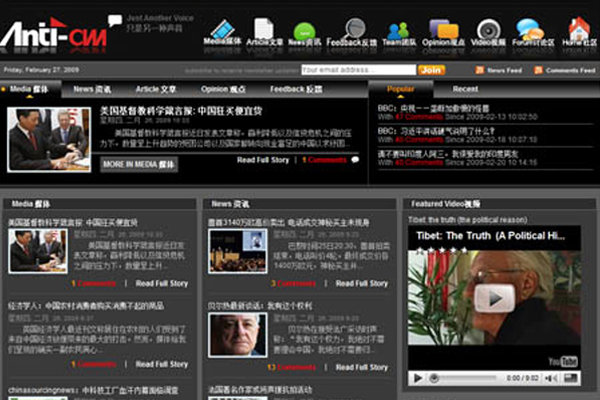 Anonymity But No Place to Hide

On the internet in China, cybernationalism has given way to cybervigilantism. While anonymity encourages radical behavior on the Chinese internet, it is also being used to strip away the privacy of those deemed as wrongdoers, sometimes with tragic results.

With the innovation of communication technology, anyone can express themselves anonymously or semi-anonymously on the internet, sometimes to extreme degrees. Internet use in China has grown at a tremendous pace in recent years, and sheer numbers make it difficult for the government to control.

“China has 300 million internet users, and they may each be writing something or the other every day over at the millions of portals, websites, forums, BBSs and blogs,” said Roland Soong, author of the well-known Hong Kong blog “EastSouthWestNorth.”

The Chinese government has not been oblivious to the implications of anonymity on the internet, and has taken steps to increase accountability. Yet while the government has set rules for internet use in China, they have been largely ignored in places like internet cafes. A user is required by law to present his or her ID so that it can be recorded in connection with the computer and IP address used. However, internet cafes often don’t adhere to this rule.

So Chinese netizens can feel empowered by their perceived anonymity on the internet. And in a country where the internet has been particularly liberating, some people are using anonymity to voice the radical and sometimes violent views they can’t voice in real life.

“Views expressed on the internet are much more radical than what we see normal in other places,” said Suisheng Zhao, editor of the Journal of Contemporary China.

Some of this takes a nationalist turn. While the government encourages nationalism to an extent, it is careful to make sure it doesn’t become too extreme, as internet comments often do. Called “cybernationalism,” these views are becoming more and more visible on Chinese internet forums and chat rooms.

“Cybernationalism is a phenomenon that many internet users, especially those young and radical people, express their views by hosting internet chat rooms and blogs,” Zhao said.

However, “cybernationalism is not a movement,” said Abanti Bhattacharya, associate fellow at the Institute for Defense Studies and Analyses, a think tank in India. Rather, it is more of a growing trend with deep roots in older forms of Chinese nationalism.

Chinese nationalism is not new. The Chinese government often uses nationalism to mobilize it’s populace behind its agenda and shore up its legitimacy.

“Nationalism in China is mainly state-led and emerged as a potent ideological tool in the 1990s when Communist ideology was discredited and patriotism began to be promoted to bolster party legitimacy,” said Bhattacharya. However, “it will be wrong to understand it as merely a party affair but has spread among the Chinese people particularly among the intellectuals, writers and other professionals.”

On the internet, however, “only a small portion of hard-core activists are self-motivated enough to be called cybernationalists,” said Wu Xu, assistant professor at Arizona State University.

Those cybernationalists are generally considered to be largely young adult urban males who are fairly well-educated. However, the anonymous nature of the internet that allows them to post without repercussions also prevents them from being definitively characterized.

“Chinese internet users [have] pseudonyms and nicknames, so it is impossible to tell the demographic composition of the cyber nationalists,” Soong said.

Events usually trigger outbursts of cybernationalism. In March 2008, a protest in Tibet followed by the disturbance of the Olympic torch relay by pro-Tibet demonstrations triggered a sharp response from Chinese netizens.

“The immense speed and maximized impact of cyber nationalism could be glimpsed from the anti-CNN web site that was launched by a Chinese to respond against the alleged Western media bias on the Tibetan uprising,” Zhao said. This website was home to thousands of posts and comments that for the most part fell in line with the website’s mission: “collecting and sorting out the evil proof of western mainstream media’s guilt, making our Chinese people’s voice heard.”

The Dalai Lama was a common target on several forums as the protests followed the torch, with comments like “Against the Dalai Lama Bastard! I have to declare to the world, the Dalai Lama is a mongrel!”

This is worrying to the Chinese government. While nationalism is appreciated and encouraged in some respects, radical demonstrations of nationalism and violence are signs of social instability that the government works hard to avoid. Experts say nationalism on one hand is able to enhance the state’s legitimacy, but on the other, it can also be an obstacle to China’s growth. Zhao said the government is facing a “dilemma” now. 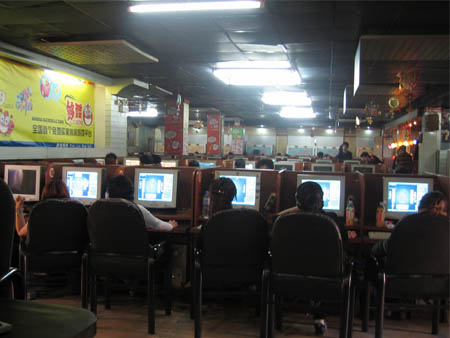 Many Chinese access the internet at internet cafes, where the rules are not always enforced. Photo by: Kai Hendry

“We want to use those nationalist, including cybernationalist, elements to strengthen [China’s] position, but on other hand, these very emotional, violent calls could hurt [China’s] relationship with many foreign countries or hurt their image and also hurt their economic interests,” he said.

While anonymity encourages radical behavior on the internet, it can at the same time strip it away. Sometimes, cybernationalism morphs into a kind of guardian of Chinese morals and ideals, using virtual space to attack those who don’t conform in very real ways.

In April 2008 when the Olympic torch was carried through San Francisco, Grace Wang, a Chinese freshman at Duke University made several comments in front of clashing pro-Tibet and anti-Tibet protesters in an attempt to encourage dialogue. She was shouted down by the anti-Tibet protesters. In the days following, a photo of Wang with her Chinese name, identification number, and contact information, along with her parents’ home address in China, were circulated through China’s most popular forums. Thousands of insults and derogatory threads about Wang were added as Wang’s family was forced into hiding.

In response to one of the many posts on the subject, one netizen wrote that Wang was “effectively embarrassing the Chinese people, with her evil sins witnessed personally by several hundred overseas students.” Other comments called for her to be hacked into pieces or boiled in oil.

The tactics used to locate Grace Wang’s personal information during the Tibet protest has also been used to find and harass people all over China in a tactic known as the “human flesh search engine” ( 人肉搜索引擎). The victims of these web mobs are often people who have exhibited behavior viewed as inappropriate to a Chinese person, as many comments suggest, and are attacked with a “cybervigilantist” fervor.

In the most recent and well-known case, a woman named Jiang Yan committed suicide after learning of her husband’s infidelity in 2007. A friend, Zhang Leyi, published her private diary online, and soon the human flesh search engines went to work. Within a few days, Jiang Yan’s husband, Wang Fei, found his personal information including his phone numbers, ID numbers and pictures of him and his mistress circulating all over the internet, along with thousands of comments calling for various forms of harassment and violence.

There are indications that the government is growing concerned about cybervigilantism. Wang’s situation led to the first court case related to these human search engines–in December 2008, a Beijing district court fined Zhang Leyi a total US$1,100 for violating Wang’s privacy and causing defamation of character. The courts also held the sites carrying the information liable, requiring them to remove such personal information if it is brought to their attention.

While this is a landmark case, there are worries that little can be done to stop violence in response to internet postings. “I don’t want to see this sort of thing happen, but this is happening because the judiciary is not strong enough to bring justice,” Soong said. “Instead we have cybervigilantism.”

Netizens have also targeted governmental officials, furthering the government’s concerns. One official seen wearing watches and smoking cigarettes too expensive for someone with his salary was heavily discussed in BBS forums. Another official who was seen forcing an 11-year-old girl into a public bathroom was the subject of even worse scrutiny. He was identified as Lin Jiaxiang, a party secretary of Shenzhen Maritime Administration, after someone posted his picture following the incident and other netizens recognized him. He was dismissed from his post as a result of public pressure.

As a result, many Chinese people are cautious on the internet. A Shanghai woman who goes by the English name Fauna runs chinaSMACK, a blog devoted to translating popular Chinese-language posts into English, and refuses to reveal her Chinese name to the public. Her blog focuses on scandals and the more shocking posts on Chinese internet forums, which has drawn criticism from some Chinese netizens for presenting the “bad side” of Chinese society to the English-speaking world.

“Although the chance that someone will give me trouble is very small, I believe it is still my responsibility to protect myself and my information on the internet,” Fauna said in an email interview. “There is not much I can do to protect myself against professionals or the government, but I can at least protect myself from normal people with bad motivations.”

The thought of anonymity emboldens, while the speed and scale of the internet also make it possible to erase even limited presumptions of privacy. The Chinese government continues to monitor and control the actions of cybernationalists and cybervigilantes, but as netizens become more tech-savvy and the internet slowly slips out of the Chinese government’s hands, it remains to be seen how long this control can last.

Jesica Chang is an undergraduate student at Colby College. Katherine Chu is a Ph.D. candidate in Politics and International Relations at the University of Southern California.