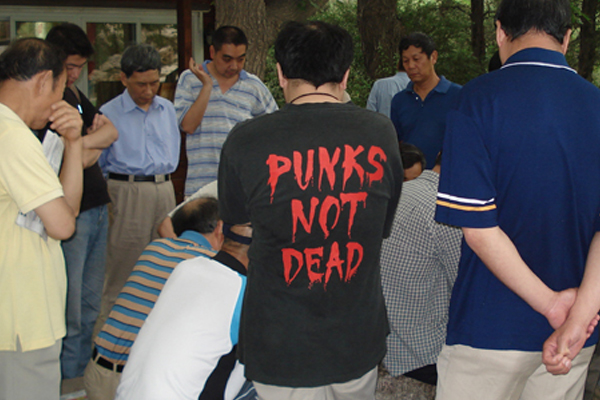 Punks on the Rise

Though born in rebellion against music label dictates and marketing departments, punk rock’s durability and popularity has led companies across the globe to embrace and seek to capitalize on the genre—the dark clothing, Mohawks, tattooed arms and even the controversial and often political lyrics.

Punk with Mandarin lyrics, however, still surprises many. It blends retro, techno, hand clapping, Chinese acoustics and bursts of loud screaming. This is Chinese punk.

Bands such as Breathing, Cobra and Tang Dynasty gave young people an outlet for expression in the relatively conservative society of the 1980s. In response both to the often political lyrics and the music itself, the Chinese government restricted performances. In its infancy, the state banned television and radio broadcasts of punk rock.

But today, contrary to Western perceptions of a conservative Chinese government, the punk rock scene generally operates without government censorship, in marked contrast with its earlier days.

“The government is not actually restrictive to this kind of music,” said Wu Wentao, an editor at Sina Music, speaking through a translator. “You may not see it on television or in mainstream reports very often, but there is coverage of punk rock shows in many rock and roll magazines, music magazines, bars and LIVEHOUSE [a popular music venue in Beijing]. In addition, many foreign punk rock bands like NOFX and even an extreme one like Napoleon Death have performed in China.”

Wu said that some of China’s bands have given performances in America and even toured in the European Music Festival, all of which the government had to approve. “The government gives a loose environment for punk music to develop in China,” he said.

Music video for the song Kill Your Belly by Hang on the Box.

Chinese punk rock bands are also reaching beyond their own country. The group Joyside not only performed in Beijing at the acclaimed Midi Music Festival in 2005, but also toured in the United States and Western Europe.

Reasons for the government’s relatively relaxed standards on punk rock vary. According to a recent report on National Public Radio’s “All Things Considered,” the government is permitting artists great freedom as long as such expressions are confined to the fringes, as in Beijing’s suburban arts district.

Others feel that China wants to maintain its international reputation.

“Fans [at punk rock shows in China] were about half foreigners, half local Chinese, so shows were still relatively open,” said Larry Kao, a former writer for Asia Pacific Arts magazine and denizen of the Beijing music scene. “Shutting down a punk rock show that is, for the most part, peaceful in front of a bunch of foreigners would be bad publicity for China.”

Lyrics that have largely lost their political edge may also be a reason for the government’s flexibility, many say.

“Chinese punk bands have largely become apolitical at local shows,” Kao said. “The freedom of China mainly revolves around not questioning CCP [Chinese Communist Party] rule or threatening the party. For the most part, the punk bands have accepted this, and even if they don’t completely agree, they don’t actively announce it in their music.”

While the Chinese government is giving punk rockers room to develop, parents are more resistant. Those coming of age during the Cultural Revolution are sometimes worried the boldness and rebellion of punk harkens back to those chaotic and sometimes dangerous days.

When the PBS program “Foreign Exchange” did a documentary on the Beijing punk band Reflector, bass player Tian Jianhua or “TJ” said that his parents were angry with him for wanting to become a musician. To his parents and others, punk rock represented resistance to the government and would never lead to a stable career.

And indeed, punk rock has a history of rebellion in China. In the late 1980s, when students and others were upset by political corruption and economic instability, it was rocker Cui Jian who helped articulate their discontent with his song, “Nothing to My Name.” Often called the “Father of Chinese Rock,” Cui Jian’s faith in the individual resonated in his  lyrics, as in “I want to give you my hope. I want to make you free.”

Today’s punk rockers themselves often define themselves as living in opposition. “I define punk rock as a spirit,” Wu said. “It despises all; does not care about anything; does not even look up to itself; angry; wants to destroy everything.”

The members of Chinese punk rock bands view the music genre in a similar fashion.

“Punk rock to me is the kind of music that talks about the real things that are happening in the social systems and people’s mind and the true situations that the whole world or the people are facing,” said Xiao Rong, lead singer of the popular punk band Brain Failure. “It could even be some stories created from personal experiences. But for sure, rebelliousness is part of it.”

Today, rather than rebelling against the government as in the days of the Cultural Revolution, punk rockers have found other ways of reacting.

“They mainly go against society in their form of dress,” Kao said.

But the music is at odds with China’s pop mainstream, which favors gentler music and sweeter lyrics.. For many Chinese youth, punk is a release from an otherwise highly choreographed existence that expects a bubblegum conformity.

While the first wave of punk rock music in the 1980’s hinted at the government and society’s repression of the individual, the second and third waves in early 1990’s and late 1990’s, respectively, gained confidence in their identities and voices. Punk rock artists today are focusing more on experimenting with the sounds and changes in society.

Brain Failure, for example, speaks of Beijing’s transformation and modernization in their English language song, “Coming Down to Beijing” with lyrics such as, “How it’s so pretty, how it’s so junky…All the shit’s happening in this city. How did they build it, all the buildings…Leave for a week, can’t find your home.”

Xiao also described how Brain Failure’s music and perspectives have changed along with society over the years.

“Brain Failure had a song named “Rebellion for Freedom”. It was a shout out about ‘this is not the generation we were yearning for and we are going to smash it up.’ I wrote this when I was 19 years old, but today, which is 9 years later, I think “smash it up” is totally not enough to describe the voice of the youth of this world. We need many more ideas to make this world a better place, such as better communication with each other. So I think that not only Chinese punk rock, but also rock and roll is about a new kind of “liberation”; a new wave that allows people to have an open mind in order to know each other well and be united.”

While China’s punk rock music lyrics have become more diverse and socially progressive, the gender makeup of bands has not. Few females are up on stage.

“The majority of music fans might think that the female’s instrumental techniques and consciousness might be somewhat weak, thus the music cannot possibly be great,” Wu said. “Therefore, the bands will often be viewed condescendingly. However, later, people discovered many girls are cool.”

Wu cites all-female bands such as Hang on the Box and Da Shaya, which translates to Big Shark, as those who have been able to win fans and respect from male rock bands.

These bands embrace and play on their femininity, both in their images and lyrics. The calm pink color on Hang on the Box’s Myspace page clashes with a song title and their tagline, “You hate me, but I love you.”

More surprising is the crude language in their titles and lyrics. The simple rhythm of the drums and melody contrasts with their coarse English lyrics in songs such as “Asshole, I’m Not Your Baby” and “No More Nice Girls,” from their final 2007 album. The screaming lyrics are more than just typical punk rock music; behind the loud voices are four girls showing their discontent with gender inequality.

“This is the first time that a mainstream media in China has created such an established rock channel,” Wu said.

“Typically, sales for albums we release from punk/indie rock bands usually fall in the 3,000 to 6,000 range, which is comparable to sales for albums released by notable U.S. indie labels,” said Michael LoJudice, the general manager at Modern Sky Entertainment.

LoJudice, however, said sales are still not where they should be and that better-established bands are expected to sell 50,000 units.

The meager record sales for punk rock bands may be partially due to the alarming piracy rate in China. The Recording Industry 2006 Piracy Report shows that in China in 2005, more than 350 million pirated discs were sold. 85% of the total sales in China are illegal with the piracy value worth US$410 million. Despite decreasing album sales because of internet music downloads, Modern Sky Entertainment is not worried when it comes to the high piracy statistics in China.

“An interest in punk rock music has increased in China, but physical CD sales have dropped,” LoJudice said, citing the Internet downloads siphoning off sales.

“Piracy is becoming less of an issue for us as more people look to the internet for music,” he said. “The pirates themselves are being affected by the internet –soon, physical CDs will serve as more of a marketing tool for artists in China.”

Kao has a similar perspective on piracy in China.

“The labels themselves are Chinese-run, and smaller operations are able to make a profit similar to how independent labels make their profits in the U.S. despite the recent years of online piracy—physical piracy has been a problem in China years before the early days of Napster in the U.S. [The top bands] have loyal fans that are willing to pay for legitimate product.”

Record sales, piracy, and politics are the least of their worries some punk rock bands. To them, music is the most important.

“The real social life stories and topics are going be much stronger than any politics,” Xiao said. “If your music is true and good with right opportunity then you are in for the road of rock and roll. Nothing could really affect your record sales between talk about the politics or not, unless if you are faking something somewhere and people like you fool them. And I don’t call that kind of music are ‘true music’.”

For now, punk bands rely on their performances to pay the bills. The audience is growing and venues are increasing. The punk scene is not disappearing anytime soon, so long as punk rock continues to avoid politics.

Yao Xu is a graduate of the the University of California at Irvine with a degree in English.