By Beckie LowensteinMarch 7, 2008 No Comments

Ports working hard to keep up with growing trade.

After a seventeen-day journey across the Pacific Ocean from Shanghai, the Hanjin Paris, a 65000-ton vessel owned by South Korean shipping giant Hanjin, finally arrives at California’s Long Beach port. After only two days at berth the ship travels north to Oakland, California. On this two month voyage, the Hanjin Paris visits twenty-seven ports including ones in China, Singapore, Hong Kong, Japan, and California. This vessel was just one of 8073 that called on the Long Beach and Los Angeles ports in 2007.

Booming U.S.-China trade strains Southern California’s port infrastructure. According to the Los Angeles County Economic Development Corporation, the combined ports of Los Angeles and Long Beach, the busiest in North America, handle nearly one-third of all inbound and outbound U.S. trade. The trade passes through these ports to U.S. consumers via rail and road links.

Combined, the ports of Long Beach and Los Angeles are the world’s fifth busiest seaport complex. Singapore, the top global seaport, and three Chinese ports–Hong Kong, Shanghai, and Shenzhen–all handle more cargo than the Southern California ports. As U.S.-Asia trade expands, each of these ports will likely handle even more cargo.

Top American imports via the Port of Long Beach are petroleum, electronics, plastics, furniture, and clothing. Top imports at the Port of Los Angeles are furniture, clothing apparel, footwear, toys, and electronics. Apart from oil, the bulk of these products are from Asia, primarily China.

While produced in China, many of these products wear the logos of American-based companies. American demand for these goods is enormous, and many of the nation’s biggest retailers rely heavily on Chinese producers. For example, Wal-Mart alone accounts for an estimated 10% of Chinese exports to the U.S.

Many retailers not only hire more than one shipping line, but rely on multiple ports to make cargo delivery more reliable.

“They have different contracts. They don’t put all their eggs in one basket…They spread their import cargo over multiple ports,” said Marcelus van Dijk, the marketing manager of Los Angeles Port. “That is to spread the risk of congestion and labor issues so they can go to other ports if one of those ports has problems.”

The U.S. still imports significantly more from China than China does from the U.S. Most cargo containers arrive to the U.S. full, but return to China empty. 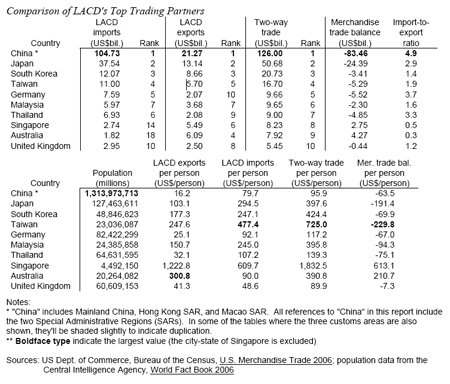 While the containers coming to the Port of Los Angeles are completely full, the containers leaving the port are closer to 60% or 70% full, van Dijk said.

According to the U.S. Census Bureau’s foreign trade statistics, the goods deficit with China was US$256.3 billion in 2007. The U.S. exported US$65.2 billion worth of soybeans, civilian aircraft, and industrial machines to China, but imported US$321.5 billion worth of computers, toys, games, sporting goods, telecommunications equipment and apparel from China. 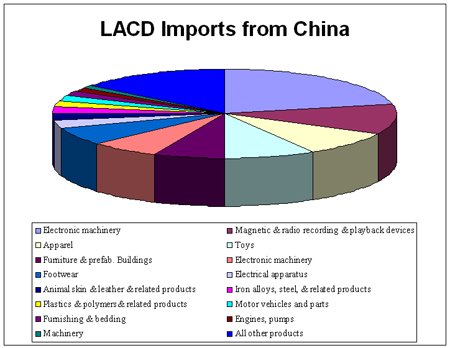 The top U.S. exports to China that pass through Long Beach are waste products, including petroleum byproducts, waste paper, and scrap iron.

U.S. exports to China include agricultural bulk coming out of the Midwest, including plastic resin, waste paper and machinery, van Dijik said. 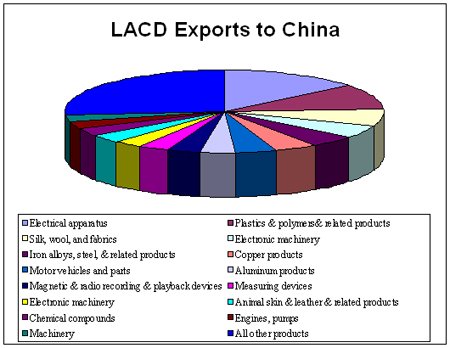 “Some machine parts move out from the Midwest, including Caterpillar parts, going to Asia for the machines they have over there,” he said.

High levels of trade pass from the West Coast, Midwest, and Southwest U.S. states to the ports of Los Angeles and Long Beach. This trade keeps many in Southern California employed.

However, a slowing U.S. economy may change the quantity and content of cargo imports and exports. Jack Kyser, the senior vice president and chief economist of the Los Angeles County Economic Development Corporation, expects more modest growth in imports entering the ports this year.

The U.S. Federal Reserve expects U.S. economic expansion to continue at a slower pace this year. But a slowing U.S. economy does not necessarily change expectations of the level of U.S. exports to China.

As a result, U.S. exports to China are likely to increase.

In addition, U.S. currency has depreciated relative to China’s currency. This makes U.S. exports more attractive to Chinese consumers. The Chinese yuan increased in value against the U.S. dollar by 7% in 2007.

“Recently, since the dollar’s been a lower value relative to Asian currency, outbound has gained some ground—still more cargo coming in than coming out,” said Will Rooney, managing director of Hanjin Shipping Line in North and South America.

Handling incoming cargo efficiently will remain the primary concern. The ports must continually update their infrastructure and improve communication within the industry.

Port authorities seek to avoid the communication and infrastructure problems of the past.

In 2004 the Port of Los Angeles and Port of Long Beach both faced congestion of facilities because the port and railway industry did not anticipate the number of containers that would be arriving from China.

“The shipping lines were giving those low numbers to the terminals. The terminals did not ramp up with the labor that they needed for that period. And also the rail companies did not have enough equipment and manpower,” van Dijk said.

Better communication between shipping lines, terminal operators and railway lines as well as improved technology and infrastructure have since made unloading cargo more efficient.

Cargo owners consider the availability of on-dock and near-dock railway line facilities in decision-making about which ports to peruse. It can make the difference between shipping trade products to the U.S. via ports on the West or East coast.

“The next couple of years might be a slowing economy but that doesn’t necessarily mean slowing us down,” said Zoe Richmond, Union Pacific Railway corporate relations and media director. “We’re still working very hard to make sure that our infrastructure is available for the current surge and the continuing surge that we will see out of Asia and other countries.”

China continues to have a strong impact on the U.S. shipping industry and the economy as a whole. As China’s economic growth continues, it is likely that this surge will not let up anytime soon.

Beckie Lowenstein is a senior studying International Relations and East Asian Languages and Cultures at the University of Southern California.