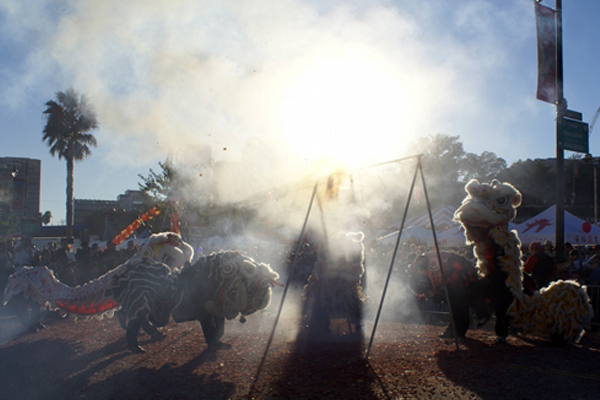 The Year of the Rat opens in Los Angeles

Born in Chinatown and raised in Pasadena, Jason Michael Jin remembers celebrating the Chinese New Year in Chinatown as a child with his parents.

“I remember the parade and the festival and firecrackers and everything,” Jin said. “But as I grew older I kind of lost my roots to that. I wasn’t as involved in Chinatown or Chinese community all through my high school and college years … maybe five, six years ago I got involved in the Chinese American community again and joined the Chamber of Commerce.”

“We want to put on a great show for all of Los Angeles to see,” Jin said.

“The Parade in Chinatown has become the premier Chinese New Year celebration in Southern California. All the residents of California basically look to our parade festival as a way of getting a better understanding of the Chinese traditions and Chinese heritage of the New Year Celebration,” Jin said. “And that’s the reason why our parade has grown over the years to over 100,000 people coming out and watching it.”

The Chinese Chamber of Commerce of Los Angeles sponsors the parade and expects it to highlight Chinatown as a gathering point for not just Chinese Americans, but for all Asian communities. The fact that many Asians celebrate the New Year around the same calendar time brings people together. Koreans, Japanese, and Vietnamese are among those participating one way or another in the parade.

“There actually used to be four different parades celebrating Chinese Lunar New Year, for a time. I would say the Chinatown one has been around for 109 years because again it’s based in the city of Los Angeles and has a big draw because of it’s location in Chinatown,” Jin said.

If the parade gives people a reason to visit Chinatown, the well-organized festival gives them a reason to stay longer. Community organizations, food vendors, and stage performances provide activities tied in with the Chinese New Year, giving individuals and families a chance to explore.

“Right now it’s already seven o’clock and a lot of people are staying in Chinatown. We broke the record,” Chong said. “Normally the people leaving Chinatown by 6 o’clock, but today you can see the big difference compared to before. Hopefully in the future more people can come to Chinatown and stay longer, try our food, try learning about our culture.”

This new business is much appreciated by Chinatown’s restaurant and shop owners. As Jody Chan, Fourth Princess of the 2008 Miss Los Angeles Chinatown Court, said, the Year of the Rat will be “very lucky and prosperous for business owners and those opening businesses.”

The Chinese Chamber of Commerce hopes that exposure to Chinese economic and cultural activities will build the level of trust in and respect for Chinese businesses.

“We want to do more business. We need to trust. With the trust, we can do anything we can. That’s why if you want to have the trust, you need to know the other culture. If you know my culture, I know your culture, we’re just friends. If I have trust in you, we can do anything, we can’t compromise anything,” Chong said. “For me, culture is important. We have to respect other people, respect the culture.”

As the Asian community grows, however, more people move out to the suburbs. The Chinese Americans who visited the churches and restaurants of Chinatown in previous years now live on the outskirts of Los Angeles. The hundreds of thousands of Chinese Americans now living in Orange County, for instance, do not often make the long drive to Chinatown.

Jin considers drawing families back to Chinatown for Chinese New Year to be key to maintaining the Chinese community’s cultural heritage.

“In order for Chinatown to prosper and continue we have to bring the children back into Chinatown and let them experience it.”

As the Chinese New Year celebrations herald the Year of the Rat, the parade sponsors could think of no better parade leader than a mouse. Both Jin and Chong expressed excitement that Mickey Mouse leads the parade.

“Mickey Mouse—though not a rat, he’s a mouse—symbolizes the spirit of Chinese New Year and this year’s theme, which is ‘children,’” Jin said. “We want the children to come back and understand what the Chinese American heritage is all about. And that’s why Mickey Mouse is our grand marshal. He’s the ultimate symbol of everybody’s childhood.”

During the Chinese New Year the Au family observes their Chinese heritage at their home in Pasadena, California, by making dumplings, giving out red envelopes, and calling their grandparents. This year parents John and Yuki Au accompanied their five-year old daughter Charis and two-year old son Akirin to their first visit of the Chinatown parade.

John and Yuki Au liked to watch their children enjoy the parade. The children experienced a sense of awe when Mickey Mouse and the decorated lions came by.

“The wonder in their faces was very rewarding,” Yuki said.

“I love Mickey Mouse! My favorite, too!” said their daughter, Charis.

Yuki Au asks Charis about the “really long dragons when they came up and did the dragon dance.”

The loud firecrackers at the dragon dance reminded John Au of his childhood in Hong Kong.

“I felt nostalgic because I am from Hong Kong originally, many years since I heard firecrackers,” Au said. “When I hear it I think of warding off evil spirits from past years.”

Yuki Au explains that although her daughter used to be afraid of firecrackers, this year she could watch and listen to the firecrackers.

Holding children’s attention throughout an entire parade proves a challenge.

“We did notice that some of the lions were children. They were really cute. But walking along the parade there was not a lot of children involvement,” Yuki said.

Parade-goers complained about pauses in the procession. Yuki Au said that a “more fluid motion would make it more interesting.”

When he was nine years old Duan, 29, entered the acrobatics industry in China. What started as a part-time job turned into an eighteen year long career as an acrobat first in China and later in the U.S.

Getting ready for his performance, Duan said, “My family has been doing this for four generations already, so since I was small I liked acrobatics a lot already… “My ideal goal is that I can let more people and everyone in the world know and have a better understanding about acrobatics culture and Chinese culture by using my own power in performance.”

Here in Chinatown, Los Angeles, Duan said, “I can feel the atmosphere of China and feel the happiness of families gathering together.”

The hard work that Jin, Chong, Duan, and many others have raised this Chinese New Year’s celebrations to new heights.

“When on parade day I see all the smiles on children’s faces, all the people who come out and celebrate,” Jin said. “It makes all the months and months of hard work worth it.”

Beckie Loewenstein is a University of Southern California student majoring in international relations. Fellow student Chia-Chia Chien contributed to the story as a translator.