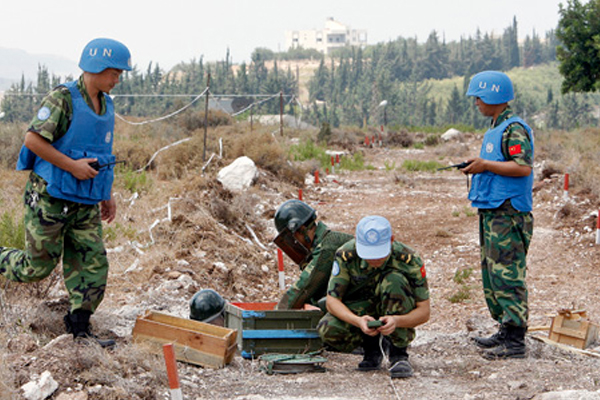 As major Western powers begin to scale back on the number of troops they provide to United Nations’ peacekeeping missions, an unlikely volunteer has stepped forward to fill their shoes: China.

China, which has long been wary of foreign entanglements and has historically had a policy of nonintervention, is playing an increasingly prominent role in U.N. peacekeeping operations and other humanitarian aid undertakings. Earlier this year, China sent 140 engineers and troops to the Darfur region of Sudan for the UNAMID (the African Union-United Nations Hybrid Operation in Darfur) mission, which is preparing to become one of the largest peacekeeping operations in U.N. history.

In efforts to expand its role as a global leader, China has increased diplomatic ties and economic linkages with resource-rich regions of the world, including Southeast Asia, Australia, Africa, and the Middle East. China’s leadership has subsequently felt an increasing obligation toward becoming a “responsible stakeholder” and playing a larger role in international entities such as the United Nations. Though, some view China’s expanding role abroad as a way to assuage increased international scrutiny and criticism for its humanitarian policies as it prepares to host the Summer Olympics.

“As the world’s third largest economy, China can’t be inward-looking anymore,” said June Dreyer, a political scientist at the University of Miami. “They’re eager to be considered a good citizen of the world, and part of that is wanting to host the Olympics; another part is playing a role in international security.”

Since 1990, China has deployed about 7,500 peacekeepers to U.N. peacekeeping missions, according to China’s Ministry of Defense. As of May 2008, China was the 13th largest contributor of U.N. peacekeepers. Nearly two thousand Chinese troops, police, engineers and military observers are serving in 10 nations, including Sudan, Liberia, Congo, Haiti, Bosnia and East Timor. And according to a U.N. press release, on August 27, 2007, Secretary-General Ban Ki-Moon appointed China’s Major General Zhao Jingmin as Force Commander for the U.N. mission in Western Sahara.

Currently, of the five permanent members on the U.N. Security Council, China and France are the two largest contributors to peacekeeping missions. According to a U.N. report, as of May 31, 2008, there are 1,977 Chinese and 2,090 French military personnel serving on U.N. peacekeeping operations around the world. Other permanent Security Council members have decreased their involvement: the United Kingdom commits 358; Russia 299; and the United States 289. Interestingly, the largest overall contributors to U.N. operations are Asian and African nations with Pakistan, Bangladesh, India, and Nigeria on the top of the list. Pakistan is ranked the U.N.’s number one contributor with 10,623 peacekeepers serving worldwide.

Although the United States, Japan, Germany, the United Kingdom, France and Italy pay substantially more of the peacekeeping budget, their reluctance to commit ground troops stems from a general distrust of the command structures within United Nations’ peacekeeping frameworks and a loss of faith in the effectiveness of deploying peacekeeping troops. The United States has been carefully reducing its contributions, trying to maintain a 25% cap so that others would share the burden of the U.N. budget. Although China contributes just 2.67% of the budget, this is a 168% increase in its contributions in 2000.

However, China continues to shy away from any form of direct military involvement. Most of China’s peacekeepers are non-military personnel. Some serve as military observers, advisors and liaisons, but the majority of Chinese forces deployed are involved with engineering, transportation, medical and other civilian projects.

According to 2007 statistics released by the Peacekeeping Affairs Office of China’s Ministry of Defense, Chinese peacekeepers have built more than 7,300 kilometers of roads, constructed over 200 bridges, treated more than 28,000 medical patients, performed over 230 surgical operations, and have cleared more than 7,500 explosives.

“China has never deployed any military troops in any of its missions,” Wen Long told US-China Today. Wen is a Chinese counter-terrorism unit officer and a former member of a Chinese peacekeeping delegation. “China’s attitude towards peacekeeping missions is one of giving help and aid, not to take any kind of aggressive stance. We want to show we care about humanitarian crises.”

Wen, who has participated in peacekeeping missions to East Timor and Liberia, was part of one of the first civilian police forces deployed by China. In East Timor, Wen and other Chinese peacekeeping members worked closely with colleagues from forty other countries, gaining valuable experience.

“I feel really lucky and proud to have been chosen as a peacekeeper. I take it as a great honor. It’s not easy for a Chinese police officer to be chosen to go on a mission,” Wen said.

China sets rigorous standards for selecting and training its peacekeepers. In order to be selected for the government’s intensive training program, officers must be at least 25 years old, have an associate degree from an institution of higher education and at least five years of professional work experience in public security fields. In addition, they must have proof of proficiency in English, two years of driving experience and be in top physical and mental condition. In the government’s 2004 screening examination only about 10% of the 500 candidates were accepted, according to a statement by Guo Baoshan, deputy director general of the international co-operation department of the Ministry of Public Security.

In 2002, China built Asia’s largest peacekeeping civil police training center on the outskirts of Beijing. The center trains its cadets in physical and technical skills, as well as in extensive foreign language proficiency and other areas of expertise required for specific missions. In addition to being trained and screened by the Chinese government, all peacekeeping candidates must pass a strict selection examination organized by the U.N., which tests cadets on their knowledge of and skills in U.N. field procedures.

“China is very careful to send its best-trained troops, the cream-of-the-crop, to foreign countries,” said Daniel Lynch, an associate professor of international relations at the University of Southern California. “They’re very concerned with projecting a good image.”

China’s rising foray into international waters comes in stark contrast to its historical policies of nonintervention and isolation. During the decade of the Cultural Revolution in the 1960s, China withdrew from all significant interaction with the West. By 1967, at the height of the revolution, China withdrew its ambassadors from all countries except Egypt.

The political chaos within the country finally began to settle in the early 70’s as the People’s Republic of China officially joined the United Nations in 1971 and re-opened relations with the United States in 1972 with President Nixon’s historic visit to China. But for the rest of the 70’s, China refused to contribute funds for peacekeeping missions and the country’s involvement in dramatic peacekeeping efforts didn’t really take off until as recently as 2000.

“China is under a lot of pressure to be seen as a responsible power as its economic and military power is growing,” Lynch said. “It’s taking small steps, but it wants to prove that it’s a non-threatening, benign power.”

“China wants to be seen as a steady player in world affairs and it has definitely made a strenuous effort to improve its image,” Dreyer said.

However, some see China as having less than altruistic motives. For example, critics of China’s policies have contended that Beijing’s lending to Africa has been primarily driven by a desire for oil and raw materials to fuel its growing economy. Others have also suggested that these actions are just another way to keep Taiwan from forging or maintaining diplomatic ties with African countries. In addition, China has also been accused of being soft on countries that have a history of abusing human rights, as Chinese companies themselves have a reputation for being exploitative and insensitive to workers’ rights.

“There is a mixture of motives involved,” Dreyer said. “On the one hand, China can be seen as accommodating [to international demands], and on the other hand, it can achieve something positive for China at the same time.”

Big investment, construction and trade deals in Africa are now being accompanied by pledges of Chinese governmental assistance. Beijing has said it will double foreign aid assistance and cancel the debt of some of the poorest countries. In Sudan, where it has been heavily criticized for supporting a government accused of abusing human rights, China has provided significant humanitarian aid. In the fall of 2007, China approved a $200 million loan to compensate victims of the conflict in Darfur. Moreover, Chinese troops are also the only non-African peacekeeping personnel in Darfur.

In general, China’s larger involvement in these U.N. peacekeeping missions has served to strengthen its relationships with the United States and other Western nations. More specifically, Chinese peacekeeping efforts are showing Western powers China’s willingness to accept its role as a “responsible stakeholder” further reassuring the world of its policy of “peaceful rise.”

Lynch, however, feels that the Chinese government is not yet ready to take on a leading global position. Most of the Chinese population remains ignorant of world affairs, and the government is actively trying to educate its citizens so they can be better prepared to play a global role, he said.

“China is changing, and as it opens up more internationally, it will take a bolder role and become more involved in world affairs,” Wen said. “But you have to look at China as a constantly developing country. You cannot expect drastic change to occur overnight. Compared to the situation 10 years ago, there has already been a lot of improvement.”

At this stage, China doesn’t want to get hugely involved in international affairs, Dreyer said. “I think they’re about at the level of involvement they want right now.”

“They want to have space to deal with domestic issues, and getting too involved in international problems that are difficult to solve is not a good use of scarce resources. I think that [China] would say that they want a proper balance between looking inward and looking outwards,” she added.

Most China experts agree that as long as China’s economy continues to grow, it will continue to become increasingly involved in world affairs. However, a heated discussion persists in academic, business and political fields over whether China’s rising influence will be a detriment to the current world order or a balancing force for a more stable global system.

“There’s a debate as to whether China will act selfishly or continue to become a responsible, rational and public-minded global power,” Lynch said. “It’s so hard to predict and it depends on so many variables. But it will take a lot of work on the part of China’s elite, as well as on the part of foreign leaders, to carefully manage China’s international relations in a way that encourages China’s rise as this kind of responsible power.”