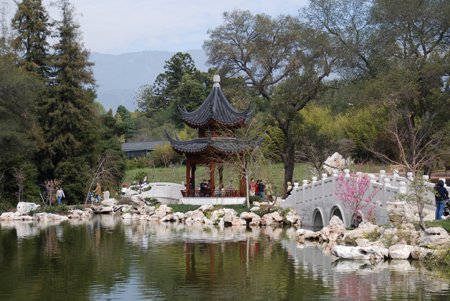 Growing to New Proportions: Chinese Gardens in the U.S.

America’s collection of Chinese gardens gets a major addition with the opening of Liu Fang Yuan at the Huntington Gardens in San Marino, California.

Cherry blossoms bloom beside pagodas and landscaped streams. The sounds of traditional Chinese folk music fill the air. The atmosphere is one of both peace and celebration.

The scene is almost right out of 19th-century China, except for one thing: it’s in Los Angeles, and it’s 2008.

The newest Chinese garden, soon to be the largest outside China, opened in February with a Chinese New Year celebration. While the Garden of Flowing Fragrance is currently three and a half acres in size, it will be twelve acres when completed. The opening ceremony brought together many local groups demonstrating Chinese folk arts, including Tai Chi, lion dancing and painting.

Over 4,000 people attended the grand opening of the Garden of Flowing Fragrance. A normal Saturday at the Huntington usually sees about 2,500 visitors.

Still, organizers called it a slightly lower number than expected.

“The cool weather and the rain… kept the numbers a bit lower than they might have been otherwise, which was a relief in some ways because we were afraid that we might be overwhelmed,” said Lisa Blackburn, communications coordinator at the Huntington.

The attendance boost continued into the following month.

“Attendance for the month of March was up by more than 20,000 compared to the previous March,” Blackburn said. “I think it’s safe to say that was primarily due to the Chinese garden.”

Ken Teh, a Chinese instructor at East Los Angeles College who gave a Chinese painting demonstration for the opening, was impressed with the results of over 20 years of planning.

This garden is just one of nine public Chinese gardens in the United States. Though these gardens vary widely in terms of size and style, all of them cite education and goodwill as their primary goals.

The National Arboretum in Washington, D.C., for example, calls its garden “a symbol of friendship between the [the U.S. and China].” Occupying twelve of the arboretum’s 446 acres, this garden was born out of a 2004 agreement between Agriculture Secretary Ann M. Veneman and Under Secretary Joseph Jen and Yang Jiechi, then the Chinese ambassador to the United States, and Jiang Zehui, President of the Chinese Academy of Forestry.

Seattle’s Chinese Garden also seeks to promote relations between the U.S. and China. This garden is a joint project of Seattle and Chongqing, its Sichuan province sister city. One of the primary goals of the Seattle Chinese Garden is to reinforce ties with Chongqing and China as a whole. China is Seattle’s third largest overall trade partner, with aircraft manufacturer Boeing the area’s largest exporter.

“I think both cities have gained tremendous benefits in cultural exchange [through the Seattle-Chongqing Sister City Association],” said Mike Craig, executive director of the Seattle Chinese Garden. “This year we are celebrating our 25th anniversary.”

The Chinese side had supplied much more than cultural insights. “[Chongqing] last year donated $1.2 million toward the construction of our first courtyard,” Craig said. “Much of the original design work was also donated. I would say altogether they’ve donated close to $2 million.”

The growing popularity of Chinese gardens in the United States reflects not only the widening Chinese diaspora, but also an increased interest in Chinese culture worldwide.

At the Huntington, this phenomenon is demonstrated not by a Chinese city, but by a Western individual. Upon his death in 1999, Huntington board member Peter Paanakker donated $10.2 million for the construction of the garden.
And this interest in Chinese gardens extends beyond philanthropists to their surrounding communities.

“We’re surrounded by a large and growing Chinese American community,” Blackburn said. “This is a great opportunity for us to appeal to the local and broader community.”

Many of the visitors to the Huntington Garden’s opening were appreciative of the new addition for that very reason. Nancy Yung, who is from Taiwan, came to the garden with her two friends.

“It is so wonderful to have Chinese heritage at the Huntington,” she said. “We’re so excited. We just bought memberships to the garden.”

The gardens are fostering educational outreach programs designed to increase awareness of Chinese culture. Joan Kvitka, the cultural education coordinator for the Portland Classical Chinese Garden, often travels to rural areas of Oregon to bring Chinese culture to students of all ages through a program called “East Meets West.”

“Since the classroom launch of the ‘East Meets West’ program in May 2006, the curriculum has reached thousands of students.” Kvika said. The program targets Oregon’s rural community of Willamette Valley, a community that sees little cultural diversity.

The program has inspired students to visit the garden itself, despite the distance many have to travel to reach Portland.

“The program brought the Chinese garden into a rural community in Eastern Oregon,” Kvitka said. “Within three months of the presentation, one of the high school teachers contacted us to say that his students insisted on taking a field trip to the Chinese Garden, four-and-a-half hours away.”

The Huntington is also active in the community. Lectures, adult classes and children’s workshops are just a few of the programs currently in place.

“Educational outreach programs have been going on since before the garden opened,” Blackburn said. “It’s one of our primary objectives.”

The lecture series, currently in its second year, is a particular point of pride for Blackburn.

“These lectures are popular with both Chinese-American and non-Chinese audiences because they provide insights into aspects of Chinese culture that help deepen the appreciation of those who share that heritage as well as those to whom it is completely new.”

Many of these Chinese gardens in the U.S. were designed to create an environment of learning for students, scholars, and the general public. The Suzhou style, associated with scholars and learning, dominates U.S. Chinese gardens. The Huntington’s Garden of Flowing Fragrance and the Portland Classical Chinese Garden are both based on this style.

June Li, curator of the Huntingdon Garden, said the style reflects the theme of the garden overall – a research-based institution with an art, library and botanical garden collection.

In addition to the design itself, the layers of meaning within the garden’s features give insight into traditional Chinese culture.

“The garden is not just a piece of property of a floral garden for people to just walk through, it is rich with cultural meaning,” said Charles Wu, who has served on the board of directors at the Portland Classical Chinese Garden and is also the author of Listen to the Fragrance: Literary Inscriptions in Lan Su Yuan. “It’s not so much the pieces of rock, and the building material, and the plants, but the meaning and the poetic expressions attached to them.”

Richard Strassberg, Chinese professor at the University of California, Los Angeles, who played a key role in the naming of various elements in the Huntington garden, echoes Wu.

“In short, the quality of a Chinese garden as an act of imagination depends as much on its design as on the names that evoke a wide range of associations in Chinese culture.”

Much of this meaning can be found in the names of the features and the layout of the garden. The naming process is usually done by committee through careful research and consultation in order to properly communicate the themes of the garden.

“This garden was inspired by all the plants that originate from China [already in the Huntington Botanical Gardens collection],” Li said. “That’s why we call the garden ‘The Garden of Flowing Fragrance.’ It’s a botanical reference to all the wonderful fragrances…as you walk along the path, whether it’s flowers or just pine trees.”

The Chinese name of the Portland Classical Chinese Garden – Lan Su Yuan – is significant as well. Portland had an advantage as it designed and built its Suzhou-style garden. As Suzhou’s sister city, Portland was able to work closely with Suzhou during the garden’s planning process.

“Lan is the Chinese word that resonates with the English name “Portland”, Su is for “Suzhou” and Yuan means “garden,” so it means “Portland Suzhou Garden,” and no other garden could take this name,” Wu said.

The increase in Chinese gardens in the United States in recent years is not likely to wane. Many of the currently existing gardens are still expanding, and with the growing Chinese American population as well as the growing American interest in China, there is large incentive to bring traditional Chinese culture to the U.S.

“The world’s heritage of cultivated plants and landscape design is heavily indebted to Chinese sensibilities,” said James Folsom, the director of the Botanical Gardens at the Huntington.

“To create a classical Chinese landscape here at the Huntington makes our gardens more complete.”

Chelsea Mason is a Master’s candidate in the East Asian Studies program at the University of Southern California.