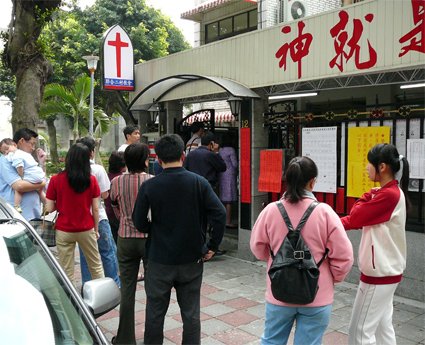 The youth vote was critical in the recent Taiwanese presidential elections as the KMT won over 60% of youth votes.

All over Taiwan, youths waved flags in the air, shouting the names and slogans of the presidential candidate they supported. The day before the election, from the southern metropolis of Kaohsiung, to the northern capital of Taipei, rallies and speeches echoed through Taiwan’s city streets and public halls. Youths began a mass exodus of their university dorms, boarding trains and riding motor-scooters to their hometowns, just to cast a vote in the 2008 presidential election. The next day, Saturday, March 22, it was clear that the youth voice had spoken. Their choice? Kuomintang candidate Ma Ying-jeou.

Taiwan’s 2008 presidential elections ended in a landslide victory for Kuomintang (KMT) candidate, Ma Ying-jeou, as he defeated the Democratic Progressive Party’s (DPP) Frank Hsieh by a margin of over 16 percent of the popular vote. While the victory was decisive, the youth vote still remained an essential part of the KMT’s success, as Taiwan’s United Daily News polls showed the KMT stealing more than 60% of the youth demographic.

Although exact age-based voting statistics are not available due to Taiwan’s anonymous ballot system, and no comprehensive exit polls were conducted following this year’s presidential election, Taiwanese polls leading into the elections did indicate the majority of youths planned to vote KMT. 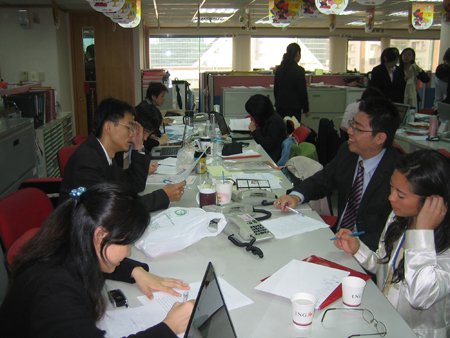 Students fill out surveys about their knowledge of Taiwanese politics and how they will vote in the election. Photo by Damon Ferrara.

The inclination of most youths – voters aged between 20 and 29 – to vote KMT in Taiwan’s 2008 presidential election shows a stark contrast to the youth demographic’s decision in 2004, when Taiwanese exit polls estimated nearly 60% of youths voted for DPP candidate Chen Shui-bian. After Chen won the 2004 election by less than 30,000 votes – almost 13 million votes were counted – much of his success was attributed to the support mustered by the youth vote.

Taiwanese youths play an important role as swing-voters in Taiwan’s political arena, and are consistently targeted by hopeful politicians as a key demographic. This remained true during Taiwan’s 2008 presidential election, when candidates Hsieh and Ma actively sought the support of youths, enlisting youthful campaign representatives, attending rallies wearing backwards hats, and even marketing bobble-head figurines resembling themselves. Additionally, both parties had youth leagues, comprised of and administered by youths, designed to address the concerns of young voters and solicit votes to youngsters on behalf of their candidate.

Of the youths interviewed, only a slim margin supported DPP candidate Frank Hsieh, with a roughly equal number undecided. The vast majority of them supported Ma Ying-jeou. In response to a written survey asking which issue was the most important for Taiwan presently, those interviewees intending to vote Ma in the 2008 elections overwhelmingly pointed to the economy.

Perhaps it was not a coincidence that Ma was running on the platform of stimulating the economy, promising to raise GDP growth to 6%, lower unemployment from 3.95% to 3%, and raise per capita income to US$30,000. Indeed, with a plan like this, if the economy is your main concern, Ma Ying-jeou would certainly seem to be your man.

However, the youths interviewed were also sometimes unsure of why they supported Ma. Many were unable to name a specific Ma policy they agreed with, only saying weakly that he would help the economy.

So why were youths so sure that Ma would help the economy? The answer is perhaps a simple one: their parents told them so. Indeed, youth voters were more inclined to support the same candidate as their parents. That is, if mom and dad voted KMT, the youth was likely to do the same. However, while every interviewee coming from a KMT household voted for the KMT candidate Ma Ying-jeou, the same was not necessarily true for DPP families and Frank Hsieh.

Professor Lin Jih-wen of Taiwan’s National Chengchi University offered another explanation to why youths were more likely to support Ma: they just wanted the DPP out of office. “Taiwanese youths grew up under [President Chen Shuibian],” Lin said, implying that Chen’s unpopular eight years of presidency left an unfavorable impression of the DPP in the youths’ eyes.

Thanks to a series of embezzlement scandals, Chen had grown so unpopular in Taiwan that even DPP supporters began to turn blue – the KMT party color. This was evident in the election results, when, even in DPP strongholds such as the city of Kaohsiung, the KMT won the popular vote.

Moreover, Taiwanese youths voting in the 2008 elections did not experience the repressive policies of the KMT prior to the 1990s. Whereas earlier generations of Taiwanese lived under martial law and were not afforded the right to vote, current youths are too young to remember Taiwan’s first presidential elections in 1996, let alone the period of martial law which ended in the ‘80s.

And with the hype surrounding Ma’s promises to establish a “common market” across the Taiwan Strait, set-up direct flights to the mainland, and generally improve relations with Beijing resonating throughout Taiwan, perhaps it was just easier for the youths to jump on the bandwagon. Ma’s policies, after all, represented change for Taiwan; although Hsieh did pledge stronger ties with the PRC, his policies were less ambitious about opening Taiwan to mainland China, neither for investment, nor for travel, and voters may have more closely associated these policies with Chen’s position. 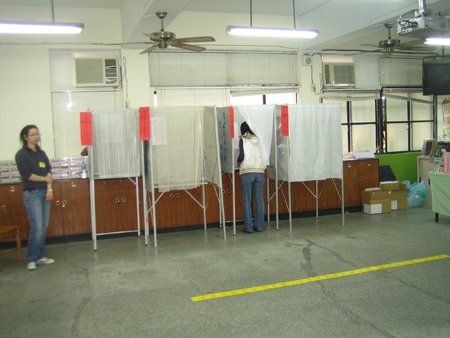 A youth casting a ballot on election day. Photo by Damon Ferrara.

So why did some youths opt to vote Hsieh? In contrast with KMT supporters who cited the economy in general as reason for voting Ma, interviews with youthful DPP supporters showed that the youths had very specific reasons for favoring Hsieh. Timothy Wang of Taichung in central Taiwan, for instance, said Ma would bring Taiwan too close to mainland China, and disliked what seemed to be pro-China policies, which many believe are inherent to the KMT party.

Hsin-Ta Lee, a 23 year-old from Taipei, looked more to Taiwan’s history than to its current political scene when he decided to support the DPP. Lee noted that prior to 2000, the KMT had already ruled Taiwan for half a century, and much of it under martial law. Lee was also displeased with the KMT’s support for eventual reunification with the mainland, noting that it was China that had blocked Taiwan’s entry into the World Health Organization, the WTO, and pressured Taiwan’s removal from the UN.

Strikingly, regardless of the reason these youths supported the DPP, their concerns were all related; they all felt a threat to Taiwan’s identity. Lee and Wang’s disapproval of eventual reunification, for instance, reflected their feelings that Taiwan’s identity would be jeopardized if it became a part of China. Moreover, the youths supporting the DPP also supported the referendum in favor of Taiwan entering the United Nations under the name “Taiwan,” as opposed to the island’s official name, “The Republic of China.”

Another Taiwanese youth, a 21 year-old who went to high school in the United States, reflected on her experiences with the dilemma surrounding Taiwanese identity. “In the U.S., people used to ask me if I was Chinese,” she remembered, “No, I said, I’m Taiwanese.”

Politics may have also played a part in some youth’s decisions to support the DPP, as Wang admitted one reason he supported Hsieh was just to counterbalance the KMT’s majority control of the legislature, since Taiwan’s January 12 elections left the DPP hopelessly out-numbered in the National Assembly. Wang later said the biggest issue facing Taiwan is its identity and the divergence in national opinion over what it means to be Taiwanese.

But while young DPP supporters tended to dislike the idea of moving closer with China, many KMT youths supported eventual reunification with the mainland, though under specific terms. In spite of the KMT’s China policies however, some DPP youths were still confident Taiwan would retain its identity. “I never thought Taiwan and China could unite,” one DPP youth said, “they’re just two different cultures.”

Ideologies aside, the youth vote once again played a crucial role in Taiwan’s presidential elections, showing a dynamic that will remain central for future candidates planning their campaigns, regardless of party affiliation.

Damon Ferrara is a 2008 graduate of the University of Southern California with a degree in International Relations and East Asian Languages and Cultures.