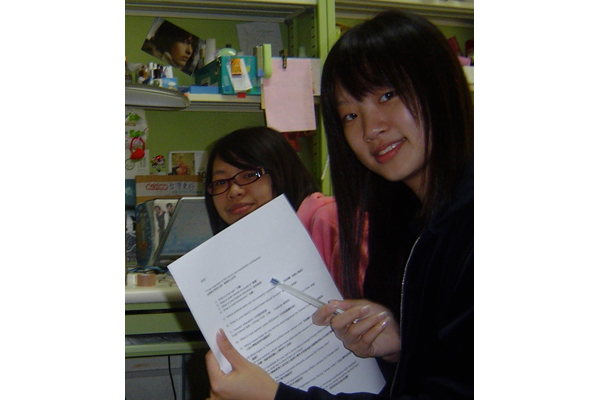 During the recent Taiwanese elections, women share their ideas about gender and politics.

Sharon Chiang stamped her ballot on March 22 and dropped it into the ballot box. A member of the first generation in Taiwan to grow up with neither war nor martial law, she was helping select Taiwan’s next president. It is a signal of how much has changed in Taiwan that Chiang and other young women found their participation completely unremarkable.

In dozens of conversations with nineteen to twenty-six-year-old women in Taiwan in days before and after the election, the most common sentiment expressed was along the lines of “I love Taiwan! I love my country!” Many of those interviewed were especially proud of the rapid gains women have made in Taiwan. While all were happy to enjoy the benefits of this progress, few were especially interested in politics or anxious to push for greater social change. All of those interviewed were college students or recent college graduates. Like many of their fellow citizens, many of these young women were disillusioned about politics. Many complained about the corruption and ineptitude of the outgoing Chen Shui-bian administration. Still, these women insisted they were optimistic about Taiwan’s future and were confident that women would play an important role in shaping that future.

This optimism is clearly the product of recent accomplishments. While Soong Mei-ling, the wife of longtime president Chiang Kai-shek, had played a prominent role representing the Republic of China abroad, especially in the United States during World War II, women did not occupy important government offices until relatively recently. Annette Lu (Lu Hsiu-lien), as vice president for eight years is only the best-known of the women who have held important government posts.

Taiwan’s constitution has guaranteed women 10% of the seats in the legislature since 1947. Most of those interviewed complained that this representational floor is now pointless. They hoped that the number of women legislators would eventually match the 49% female share of the population. Several asserted that “since women are already perfectly capable of winning legislative seats on their own, this quota merely ends up serving as a patronizing crutch,” according to Sharon Chiang, a recent political science graduate of Taiwan’s National Chengchih University. Last January’s legislative election placed Taiwan among the top twenty countries worldwide in terms of female political representation.

While they said they wanted more women in politics and working as government officers, however, none of the young women I spoke to were interested in pursuing such a career. They were engaged and reasonably well-informed. Most read newspapers online on a regular basis, follow television news, and routinely discuss politics with family members. A few of those interviewed majored in political science, law, or international relations in college, but even they rejected the idea of becoming politicians, government officials, or lawyers, mainly due to family or societal pressures. While they championed women’s rights to run for elected office and to serve in government positions, they still noted that politics and government are still viewed as a “man’s world.” 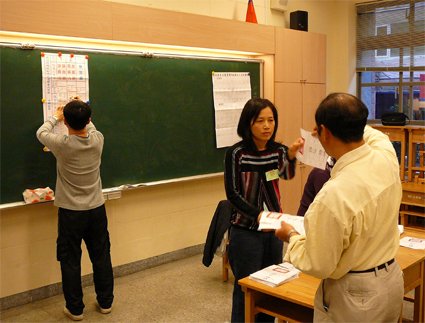 Instead, they mostly seek careers in the private business sector since “their families and friends perceive the competition to be less fierce and the nature to be less corrupt in these private companies than in government posts,” shared an English major at Chengchih University, who wished to withhold her name. “Bashing a fellow candidate during an election campaign, or even bashing one’s fellow colleagues in the legislature, for example, is comparable to delivering blows and knockouts to a boxer’s opponent. It seems to us Taiwanese people that, in politics, the more and harder you punch, the more likely you will be the eventual victor. And this just does not seem very ladylike to us,” she explained. Several of the interviewed subjects also seemed satisfied that they could be successful at their jobs and not have to simultaneously worry about being in the public light at all times.

Perhaps because only a few of those interviewed had post-graduation work experience, none seemed concerned about women’s labor and other rights. They said they had not encountered gender discrimination at school or at the workplace. Instead, they expressed pride at the improvement made in the status of women from one generation to the next. A twenty-six-year-old employee of ING Insurance )who asked not to be named noted, “Taiwanese women are living, working, and functioning extremely well right now, and that is why we do not have very many complaints. Women of older generations, such as our mothers and grandmothers, faced a kind of discrimination that we do not have to face today. We are lucky, and we know it. There is no longer this stigma of being a woman, and we know we are not inferior to men. As a Taiwanese woman, I feel capable and protected, and many of my friends feel the same way.”

Though the young women I interviewed were not willing to enter the “man’s world” of politics, they were proud of leaders such as Lu and Hsiao Bikhim, a Democratic Progressive Party leader and presidential advisor who has served as a legislator. And these women were following the election closely and were anxious to cast ballots. None, though, volunteered for one of the campaigns. 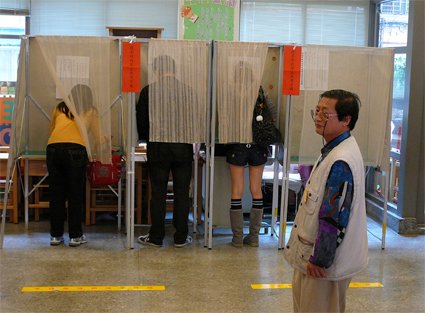 Many of these young women favored the policies and promises of the Kuomintang (KMT candidate and eventual victor, Ma Ying-jeou, but overwhelmingly, those who favored him said they were primarily drawn to him because of his good looks and his kind personality. Some Ma supporters were a bit shy and some were quite blunt, but each included comments about him being more “handsome, gentlemanly, presidential, and leader-like” than Frank Hsieh (Hsieh Ch’ang-t’ing), the Democratic Progressive Party (DPP) candidate. Most attributed the intensity of their support for Ma to his “emotional appeal.” Hsieh:s young female supporters, on the other hand, argued that looks should not matter and that good leaders are better than leaders who merely look good. For these women, it was mostly Hsieh’s passion for “everything Taiwanese” that attracted them to vote for him. Additionally, many women pointed out that the DPP has traditionally been more generous to women in terms of appointing females to government staff positions. Bruce Jacobs, a professor of Asian Languages and Studies at Australia’s Monash University, commented that Ma and the KMT are not the only ones who are making progressive change by elevating the public status of women. He added that “the DPP government, too, was committed to having women appointed to senior positions in the government,” namely Lu, as mentioned before. Even more recently, with Tsai Ing-wen as the party’s new chairwoman, the DPP continues to ensure that women are also very much an active part of both the local and national level.

Ma’s March election and the January Kuomintang legislative victories will shake up the government. During the campaign Ma promised to appoint women to at least a third of the high-ranking offices in his administration. He also pledged to establish a gender equality commission to help elevate the status of women, create over a hundred thousand new jobs for women within four years of his inauguration, and allocate a budget for women-related policies as soon as he assumes office. 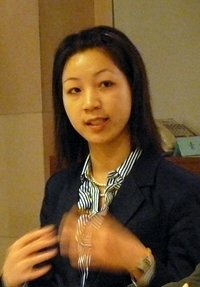 In recent weeks since Ma’s inauguration on May 20, he has already begun to act on some of these promises, already “signifying a considerable change from past KMT traditions of appointing males to be public officers,” according to Meg Chiu of Taiwan Thinktank. She went on to note the appointments of Chan Mignonne Man-Jung to Senior Advisor of National Security Council and Lai Shin-Yuan to Director of Mainland Affairs Council as examples of recent additions of women to his cabinet.

If fully implemented, such measures should do much to strengthen the status of women and their engagement in vital decision-making. None of these promises, however, seemed decisive in winning the support of young women. Generally confident that their own lives and career prospects would be better than their mothers, these women were proud of Taiwan’s democracy and happy enough to participate as voters.

Pauline Yang is a rising senior at the University of Southern California majoring in Political Science and Classical Piano Performance.