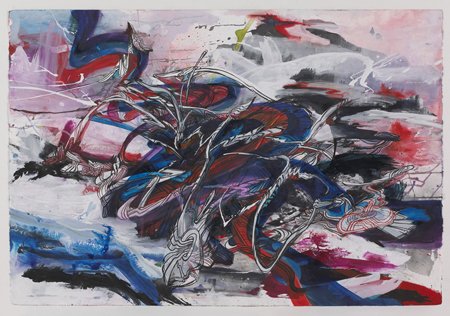 Imagine an investment that returns over 6,000% over twelve years.

This is exactly what some collectors of contemporary Chinese art are receiving at recent auctions around the world. Last year, collector Howard Farber sold Wang Guangyi’s 1996 painting “The Great Criticism: Coca-Cola” for US$1.59 million.

For the past couple years, the popularity of contemporary Chinese art has skyrocketed exponentially, creating opportunities for investors and artists alike. Just this past April, Zhang Xiaogang’s “Bloodline: Big Family No. 3” took just over US$6 million at a Sotheby’s auction. That Hong Kong auction largely focused on Asian contemporary art and the sale of the Zhang painting shattered the record for highest price at auction for a single piece by a Chinese contemporary artist. The previous record, set at the same auction where the Wang Guangyi piece sold, was set by Yue Minjun’s “Execution,” which went for US$5.9 million. Only one month later, Zeng Fanzhi’s “Mask Series 1996 No. 6” broke the record again, taking a staggering $9.7 million at a Christie’s Hong Kong auction.

“New artist records continue to be set with each sale season,” he said.

While Chinese artists have been part of the worldwide contemporary art movement since the end of the Cultural Revolution, the world is just starting to take notice.

“There have been really interesting pockets of interest for at least the last fifteen years, but there has not been a stable gallery system in Asia to support that, and there hasn’t been a lot of dedicated gallery representation in the West, so you had pockets of collectors…interested in collecting this art but there was nowhere to go,” said Ingrid Dudek, an Asian contemporary art specialist at Christie’s.

In addition to private collectors and art dealers, corporations are snatching up these pieces for reasons of their own. For the past few years the East West Bank in Pasadena, California has been amassing a collection of some of the biggest names in contemporary Chinese art.

Museum of Contemporary Art, Los Angeles (MOCA) curator Rebecca Morse worked with the bank to display the collection at the bank’s headquarters in Pasadena, California. According to their unusual agreement, the collection will be transferred to the museum in 2026.

“MOCA does not collect by nationality, but in fostering this relationship with East West Bank we realized that we had very little work in the collection made by contemporary Chinese artists,” Morse said. “It is MOCA’s hope to be able to incorporate this work into the larger collection so that it speaks to ideas that are relevant to contemporary culture and artists of every nationality.”

And while high-profile sales at auction definitely demonstrate a strong, expanding interest in contemporary Chinese art, the growing number of visitors to galleries and museums in the West attests to great interest among those who, unlike top bidders at auctions, don’t have millions to spend. Indeed, general popular interest preceded the sudden boom in the art market.

“At the time, southern California museums were focused on artists from the U.S., and there were not very many international exhibitions,” she said. “The fact that we are in the Pacific Rim was also a good reason to do a major project with Asia.”

But now, galleries are popping up all over the world featuring well-known and emerging Chinese artists, including the Morono Kiang Gallery in downtown Los Angeles. Only a year old, this gallery in the historic Bradbury building boasts stunning yet simplistic architecture, world-class artwork, and two owners who have been involved in the international art scene for years.

“In Los Angeles there was such a huge void about everything that has happened with the contemporary art movement in China, said Karon Morono Kiang, one of the owners. “We wanted to educate and expose the work to the people here.”

And educate they do. The gallery routinely holds lectures, screenings, and other events related to contemporary art.

But, as Chairman Mao once said, there can be no construction without destruction. As the contemporary art scene in China expands, it is no longer facing the old problems of international invisibility, but hyperexposure.

The 798 District, also known as the Dashanzi District, used to be a bohemian artist enclave amongst warehouses and factories in northeast Beijing. Today, it is a heavily commercialized official stop for Olympic tourists.

“It’s kind of becoming Beijing’s cultural Disneyland,” Kiang said. “The galleries that are representing the good Chinese artists are mostly outside of 798.”

But this was not the case six years ago when famed artists Huang Rui and Xu Yong established the 798 Space gallery. At that time, the district was already home to other notable endeavors including a Beijing Central Academy of Fine Arts studio and the Beijing Tokyo Art Projects. In 2003, it hosted the first Beijing International Biennale, a large-scale exhibition showcasing artists from all over the world. Currently, the third Biennale is in progress, postponed from 2007 to coincide with the Olympics.

However, skyrocketing rents soon drove out the bohemian and brought in the bourgeois.  Its prime location was also tempting to government officials looking to expand the neighboring industrial park. The Seven-Star Group that owns the land even froze all rental spaces in 798 and gave tenants until the end of 2005 to vacate. While it was decided in 2007 that the area would stay as it was, many had already become discouraged with the district.

When looking for gallery space, the Kiangs initially considered 798, but were also looking for stability.

“It was very nebulous which way it was going to go, whether the wrecking ball was really going to tear down the structures and build a Silicon Valley high rise or complex, or whether we were going to really try to wait it out and see what happened,” Morono Kiang said.

However, other galleries have been encouraged by the recent growth, and have moved to capitalize on the area’s growing status as a tourist destination.

“We felt that the development and impact of the 798 area had great potential to reach a new audience, particularly younger visitors from China and overseas,” said Brian Wallace, founder and director of Beijing’s Red Gate Gallery, which established a second location in the 798 District in 2005.

While Wallace recognizes the growing commercialism of the area, he sees this as an opportunity. “Yes, it is far more commercial on all fronts, but still many people go there – a lot for the fun of it,” he said.

But it is not just the middlemen who are capitalizing on this boom. Artists are also taking the growing popularity of contemporary Chinese art as an opportunity as well, and this is a concern for critics.

“The popular artists who are getting high prices in the market, they have big studios and they often repeat and they can hire someone to help them paint. They’re making artwork like it’s an industrial production, to please the market,” said Gao Minglu, an art critic and curator who is also an art history professor at the University of Pittsburg.

Indeed, the success of many major artists has given them opportunities unheard of ten years ago. Artist Cai Guo-Qiang, known for his gunpowder paintings and pyrotechnic “explosion events,” has become an international superstar. Yet Cai and his studio see this increased visibility as a chance to communicate with a broader audience rather than a financial opportunity.

“In recent years, his visibility has changed in ways that he never would have predicted, and it’s allowed his work to reach an audience beyond the art world,” said Project Assistant Alicia Lu and Archivist Bonnie Huie at Cai Studio in New York in an email message.

And Cai had the ultimate exposure this August– he was appointed director of visual and special effects for the opening and closing ceremonies of the Beijing Olympic Games.

But millionaire artists and international stars are not what Gao Minglu sees as the future of Chinese art. Rather, he looks to the new generation of rising artists to break with current trends and begin anew.

“The younger generation will I think try to discover a new way to make their criticism of society,” he said. “They’re looking for how to, in the long term, transform tradition and how to combine tradition with contemporary art, both in form and theory as well as sentiment to create a new art form.”

And it appears that there are multitudes of emerging artists soon to instigate this change if Gao’s prediction is correct. Beijing’s Central Academy of Fine Arts has become highly selective, taking only 10% of applicants each year. Currently, the school has about 4000 students and over 500 faculty members of international renown.

Highly trained artists have been the norm in China for centuries, and this continues today. The majority of well-known Chinese artists have studied art intensively at some point in their careers within a classroom setting. “China has an incredible system of education and training,” Morse said. “While there are certainly exceptions, artists on the whole are not generally self-taught but move through the academy. This is not a new phenomenon, but a traditional one.”

And with any luck, this system will continue to prove fruitful for contemporary art as young artists take their work in new directions.

“They’re experimenting more with different media. We’re seeing a lot of video work coming out of China, and when we first got there, there was very little,” Kiang said.

“Most importantly I think the work on the whole is getting better. Some of these concepts that they have are really speaking volumes. The work is maturing.”

The interest in contemporary Chinese art has yet to wane, presenting new opportunities not only to artists but also to investors, educators, and China itself. And while the downsides are clear, it seems that the world is willing to take the bad along with the good.