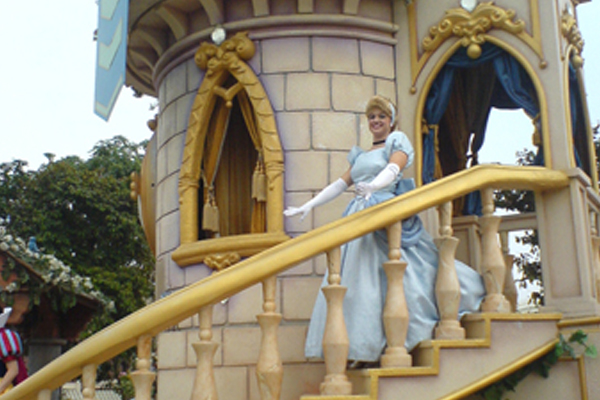 It’s a Much Smaller World, After All

“The park falls short on attractions,” Samsa said. “We were there for maybe 6 or 7 hours, from about 9 am to 4 pm, and we easily did everything that we wanted to do. The attractions that were there tended towards the boring side. While they were all transplants from America, they were mostly the snoozers.”

Disney executives had great expectations for the grand opening of Hong Kong Disneyland in 2005, projecting ten million visitors annually by 2010. However, attendance has fallen short of earlier projections. In its first full year, Disneyland saw 5.2 million visitors, and the second saw less than 4 million. Although a second-year drop is normal in the industry, this 23% decline was far greater than was expected. Given the complaints of commonly voiced by Hong Kong Disneyland visitors , this decline isn’t surprising.

Many are immediately put off by the relatively high prices. An off-season adult ticket costs HK$295 (about US$38) while summer, weekend and holiday tickets are HK$350 (about US$45). While this is less than the ticket prices in the U.S. ($69 at Disneyland), average incomes are much lower.

Recently, Jianqiang Zhao, a Chinese businessman who grew up in Hong Kong and later migrated to America, took his wife and two children back to visit his homeland for their summer vacation. Although they were more familiar with the Disney brand, Zhao decided to take his wife and children to Ocean Park, another theme park in Hong Kong akin to Sea World.

According to a series of surveys conducted by John Ap, associate professor in tourism management at the Hong Kong Polytechnic University, 63% of respondents find that Disneyland’s entry fees did not justify its value for money. Considering the average mainland Chinese worker makes about 500 to 800 yuan (US$70 to $110) per month, the entrance fees are a bit too high for most consumers. Even though the average household income is higher among Hong Kong residents, about US$2,000 a month, it is still costly to spend one-tenth of that monthly income for a family of four to visit on a non-peak day.

“I think Disneyland is too expensive, and it isn’t worth it at all. It doesn’t have many rides, interesting things to see, and the quality of service is not really that good, and the food is not that great,” said Kenneth Kan, a Hong Kong resident and staff member of Ocean Park, another theme park in Hong Kong.

Though it would be reasonable to question Kan’s objectivity, his views seem to be widely held. Many visitors complain that the park is too small, featuring only 16 attractions in 310 acres (which includes two hotels). The Hong Kong park is the smallest of all the Disney parks. Disneyland in California, on which Hong Kong Disneyland was modeled, currently has eight themed parks and over 40 attractions within 430 acres. Small as it is, Hong Kong Disneyland does contain a few new elements. Its construction integrated Chinese and Western cultures with its use of feng shui, or Chinese geomancy, and includes the only Chinese-styled tower, named Ta Ting.

Figures (in acres) include all park grounds, hotels, shopping/dining/entertainment complexes, and other amenities. *owns 4800 acres, currently only 1500 developed.

This tower is just part of the Disney localization effort, but while Disney products have been in Hong Kong for decades, Disney cartoons and characters have only been part of Chinese television since since 1986, with the greatest expansion since 1993. As a result, many Chinese do not have the same nostalgic memories as Americans when it comes to Mickey Mouse or Donald Duck.

“If you haven’t grown up with the brand, its characters and themes, you are not quite sure what you are walking into,” said Hong Kong Disneyland’s Managing Director Bill Earnest said in an interview with eTurboNews. “We are working hard to learn what the Chinese want.”

Disney executives thought they were doing just that with the Fantasy Garden, a space within Hong Kong’s Disneyland. It is filled with Disney characters built primarily for photo ops.

“The Fantasy Garden in Fantasyland is the first of its kind among the Disney theme parks in the world, tailoring to the love of local and regional guests for photo-taking,” said Connie Hon, a public affairs representative at Hong Kong Disneyland in an email message.

Yet many visitors, while enjoying their pictures, feel that the already-small park could use more attractions rather than picturesque settings.

“Splash Mountain was missing, my personal favorite from the American park,” Samsa said. “Space Mountain was there, but that may be the only real “thrill” ride.”

But despite these complaints, Disney is optimistic about the park.

“Hong Kong Disneyland has received well over 10 million guests since its opening in September 2005 and has become one of the most visited theme parks in the world as well as a top attraction in Hong Kong,” Hon said.

Surprisingly, optimism is coming not only from Disney representatives, but also from their competitors. Ocean Park chief executive Tom Mehrmann believes that Hong Kong Disneyland didn’t actually perform that poorly; they simply overestimated their potential.

“I think most parks in the world would be thrilled to achieve 5.2 million people their first year,” he said. “Obviously it was below their expectations, but from the context of how parks in the world do, it was actually a pretty good year for them.”

Because Ocean Park sees Hong Kong Disneyland as a complement rather than a competitor in the market, Mehrmann has plenty of room for such optimism.

“We offer a whole different set of products,” he said. “We basically focus on connecting people with nature. The basis of our differential is our animal based attractions, our focus on education conservation and entertainment. So at the end of the day we’re quite a complement to Disney. I don’t look at it as competition.” 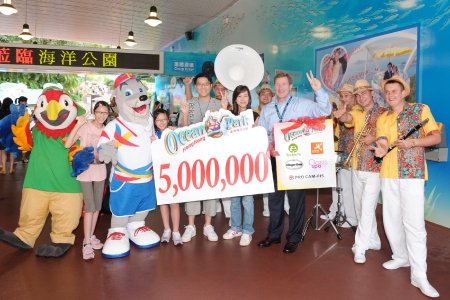 The 5,000,000th guest walked into Ocean Park with his family on 29 June 2008. This is the fifth successive year Ocean Park made a record in annual attendance. Seen here are the Hung Family with Ocean Park’s mascots and band, and the Park’s Chief Executive, Mr Tom Mehrmann. Photo courtesy of Ocean Park.

Ap notes that this effect, common to many areas with heavily concentrated theme parks, has indeed taken hold in Hong Kong.

“The opening of Hong Kong Disneyland has led to a synergy effect, where parks in the Pearl River Delta region – Ocean Park, Windows of the World, Happy Valley & China Folk Culture Villages (in Shenzhen) have seen their attendances maintained or increased,” he said in an email message.

But Disney still has a reputation to overcome. While this past Chinese New Year went a lot smoother than in 2006, when park officials had to turn away hundreds of angry tourists holding valid tickets over the holiday because they had oversold tickets, memories of this still hold fast all in Hong Kong and China. This was a poor initial impression for locals for a park whose annual attendance is roughly a third local Hong Kong residents and a third Chinese tourists.

In addition, Hong Kong officials are concerned that Disney isn’t living up to its promises of profits. And because the government has a 57% stake in the venture, these concerns aren’t easy to ignore.

“It’s very regrettable that Hong Kong people have spent billions of dollars to import this brand name and it turned out a big failure,” Frontier Party legislator Emily Lau said in an interview with Bloomberg in December of 2007. “I don’t think we should pour more money into it.”

But armed with optimism, Hong Kong Disney is sticking it out with new efforts to appeal to the masses.

According to Disney’s Hon, the park has launched a variety of initiatives to increase its popularity. “[We are] adding special events to target the young adult market, introducing flexible ticketing arrangement to offer guests more choice and convenience, and establishing rapport with the local travel trade.”

Currently, Hong Kong Disneyland is adding new attractions to the park, including a new version of the classic ride “It’s a Small World,” which debuted in April, and the interactive “Turtle Talk with Crush,” which debuted in May featuring a character from the film Finding Nemo.

Disney is also working to find new ways of integrating itself into the Chinese culture. The company has begun to play up the character Marie the Cat from The Aristocats, who has been more popular than the standard cast of Disney characters. Some, including Wall Street Journal reporter Geoffrey Fowler, say that this is because of Marie’s striking similarity to the popular Japanese character “Hello Kitty”.

These efforts appear to be working. Though Disney has not released figures, park spokespeople have stated that attendance jumped in its first quarter this year.

It’s clear that while space is limited in Hong Kong, potential profits are not. As the Chinese economy continues to expand at 10% a year, lifting household incomes and powering increased tourism, Hong Kong Disneyland is eager to take a share of this growing market. Despite the initial negative press, it seems that tourists want Disney too. Numbers have been encouraging, and the company’s new initiatives may overcome complaints about price and the range of attractions. Disney imagineers may still win over Chinese consumers.

Tian Sun is a second year student at the University of Southern California.