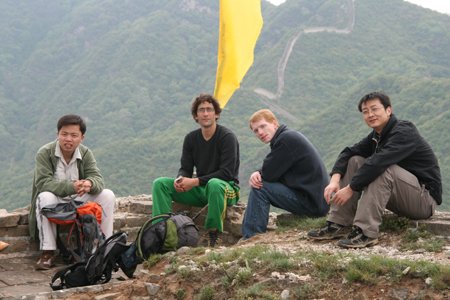 As more foreigners move to China, an online community of bloggers is expanding. Their purpose ranges from simple online diaries to business endeavors, but all seek to show China as it really is.

Meet “SHE in China,” your resource to the country, even if she doesn’t know it. If you’re new to China, this blog details everything from daily matters such as Chinese etiquette to bigger concerns like preparing foreigners for the Beijing Olympics.

“When I moved to China I wanted to keep some sort of journal of my experiences—as living in China proved very different to the other countries where I lived before,” said Jonna Wibelius, the blogger of “SHE  [Seen, Heard, Experienced] in China.” “And at the same time, I wanted to share my stories with friends and family, so blogging felt like a natural choice.”

Not until a few years ago did blogging become popular in China. The blogs include a wide array of topics and entertainment, from the best parties in Shenzhen to “I Spy Shanghai’s” Shoe Fridays, in which expatriate James from England posts pictures of the most interesting and unique shoe sightings in China.

For most, blogging begins as the most obvious and convenient way for expatriates to keep in touch with family and friends. But once many of these expats arrive in China, they find something more. When asked why they chose to reside in China or why they chose to create a blog dedicated to their experiences there, the answer for many expatriates is the same: China is just too fascinating not to.

“I find life in China just so damned interesting that I don’t want to leave,” said John Pasden, whose well-known “Sinosplice” network began as a blog eight years ago to keep in touch with friends and family. “There’s so much going on here, so much to learn, and so much to be done. I can’t imagine a life back home in the States now. It just seems so boring in comparison!”

“Before I moved to China I lived in England, Australia and Finland, but I never kept a blog,” Wibelius said. “I guess I never felt the need to share my experiences, and also, blogging wasn’t that big at that time.”

Others such as Sam, who prefers to be known by his blogging nickname “Too Much Food,” initially had no intention of blogging at all but changed his mind when he came to China.

“About a year ago, I was cooking at home in the States and thought it would be interesting to put some pictures on the web,” Sam said. “Now it’s more a blog about food and travel because there are so many things that are foreign to me in China.”

But as the world of China blogs grows, many come onto the scene with the intention to create something focused on more than their personal experience. Danwei.org, one of the most popular and influential expat blogs was created in 2003 as an English-language blog focused on the Chinese media. Advertising executive Jeremy Goldkorn took his boredom during the SARS outbreak and coupled it with his publishing background to create something new. 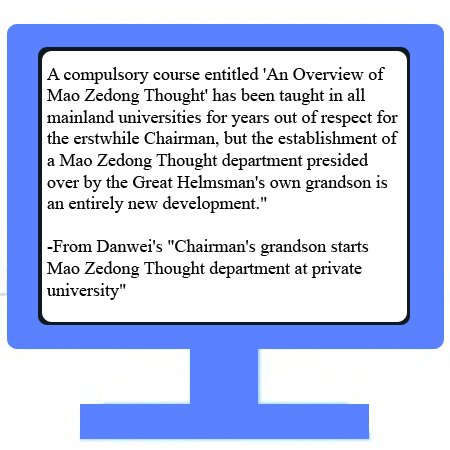 “It was never a personal blog about myself,” Goldkorn said. “It’s developed almost organically— its basic mission is to translate Chinese media and Chinese internet writings and to comment on the Chinese media scene, related issues such as freedom of expression and to present a different view of China than what you get in reading Western media, because we use a lot of Chinese sources. The intention has pretty much stayed the same; it’s just gotten a lot bigger.”

Danwei’s concept reflects the driving force behind the popularity of these expat blogs.

“In China it can be hard to find out the real story behind something and rumors abound, as the media here can be unreliable at times,” said Josh Gartner of “Cup of Cha,” a blog about his life in Beijing and observations of China. “Blogs are a place people can try to piece together what’s really going on.” 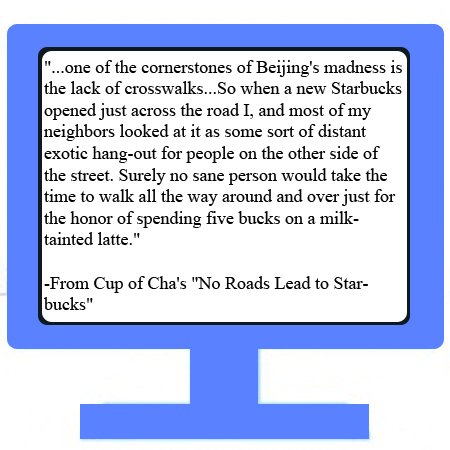 Pasden agrees that blogs allow expats to respond to what they feel is a distorted depiction of China in the media.

“Blogs offer virtually unlimited real perspectives, potentially covering every niche and angle out there,” Pasden said. “Mainstream media can never cover it all. People are realizing this more and more.”

The China blogs have also enabled networking. The easy access to expatriate blogs has helped many foreigners and other expatriates in China adapt to a new territory.

“Five years ago when I moved to Dalian, blogs were not as prevalent as they are today and my blog became known as ‘the’ Dalian blog,” Chang said. “Since it was one of the first blogs in Dalian and because of its high ranking on Google search for ‘Dalian,’ my blog’s peak saw upwards of 400 visitors a day.”

“I have readers from all over the world—at least according to my stat counter—but most of them are from the U.S.,” Wilbelius said. “I also have many readers from China, Finland, Australia, New Zealand and the UK.”

Chang and Pasden’s blogs, among others, help foreigners adapt to China.

“The focus of my blog certainly isn’t terribly obvious,” Pasden said. “I don’t cover current events or politics. What’s left is mostly elements of life and language in China, which I find interesting. The ultimate goal of my blog, I hope, is to help Westerners understand the Chinese better.”

Larger endeavors also take note of these blogs. The Wall Street Journal‘s China blog features a daily post of interesting stories from a variety of expat blogs. Danwei yearly posts its “model worker awards” that list the “best blogs about China”, including the newest additions to the blogosphere.

One recipient of these awards this year is the China Digital Times, and while this site sees itself as more of a China-related news aggregator than a blog, it functions in a similar manner as Danwei. Chief Editor Xiao Qiang uses several expat blogs to give him an idea of what is being discussed in China. “The expat blogs usually help me to find materials,” he said. “They’re becoming increasingly more important but there’s still a lot of room to grow.”

And as these blogs gain prominence in cyberspace, the Chinese internet censors have begun to take notice as well.

“Taboo topics include Falun Gong, Tibet, Xingjiang, Taiwan independence and the June 4 student uprising,” Gartner said. “On Chinese sites you will only see people make comments that are very supportive of the Chinese position on these three topics [except] the last, [which] is almost never mentioned at all. Darfur and human rights are also no-no’s.”

In addition, entire blog websites are blocked as well; blogger.com, blogspot.com and wordpress.com are all blocked in China. To be read in China, a blog needs to be on a China-based ISP (internet service provider), which must adhere to censorship norms.

“Most blogs are casualties of bigger blocks,” Pasden said. “The government has blocked big blog providers because it’s just safe and easy. Very rarely do English-language bloggers get specifically targeted, though. Most blogging is either at the IP range level, or it’s just automatic keyword-triggered filtering.”

There are ways around this restriction. The topics are mainly open for most of the English language sites. Moreover, if it’s a small site that isn’t hosted by China and not a blogging site, then bloggers should not have a problem.

However, certain times blogs may still get blocked even when bloggers steer clear of prohibited topics.

“When I started blogging, I decided not to write about political stuff because of many reasons,” Wibelius said. ” I didn’t want my blog to be censored, and there are already so many political blogs out there. At times, however, my blog gets blocked in China and I have to use proxy servers to access it. ”

“Chinese bloggers are much more careful as they potentially have bigger audiences, and more important ones in the eyes of the government,” Gartner said.

China blogs have been growing along with China itself, and because these bloggers are heavily invested in the country, opinions can be strong.

“I think China is a great place to be right now because it is seeing unprecedented growth and it’s exciting to be a part of that change,” Sam said. “I think China is still confused as to its identity as it is accomplishing this change practically overnight. It will take some time but people are excited and they know that they are in a significant period in time.”

Others have mixed feelings about the country.

“My attitude is both negative and positive,” said Chang, who lived in China for about two years. “Negative due to the pollution, social inequality, corruption and ‘control’ culture inherent in Confucianism but positive due to my travels throughout the country and friends I’ve made.”

Pasden poked fun at some of China’s issues in the humor section of his blog, “A Pictorial Guide to Life in China.” On a serious note, Pasden says that he has gradually come to an understanding with the country and its problems.

“Over time I’ve gotten a bit more sympathetic to the Chinese situation,” he said. “The truth is that taking care of 1.3 billion people and their environment at the same time is a mind-bogglingly difficult task. So while it’s true that China is still pretty dirty compared to the West, I don’t make fun of the problem like I used to. As a semi-permanent resident, it’s my problem too. I breathe this air and drink this water.”

Yao Xu is a graduate of the University of California, Irvine with a degree in English.