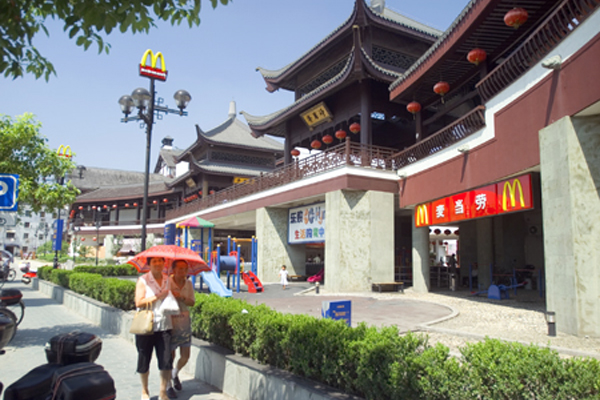 Western fast-food restaurants are rapidly expanding all over China. These provide a clean, comfortable respite where one can see and be seen.

Yum! Brands, Inc. continues to make its mark in China’s fast food industry by investing in more local tastes. The company announced on March 25, 2009 that it has agreed to invest 20%, or approximately $63 million, in Little Sheep Group Limited. Little Sheep, headquartered in Baotou City, Inner Mongolia China, opened its first restaurant in August of 1999. The restaurant is China’s leading hot pot chain with 376 restaurants as of February 2009, 130 company-owned and 246 franchises. Little Sheep’s signature hot pot is Mongolian lamb immersed in a soup base stock. Nevertheless, if its customers are not particular fans of Mongolian lamb, then they will surely find something on the menu from the restaurant’s 200 choices of meat. Yum! Brands, already a leader in China’s fast food industry, remains a top choice to its Chinese customers in this new venue. Below is a reprint of an article on fast food in China from our December 2008 issue.

In the U.S., fast-food restaurants cater to busy people who are looking for quick food and service. In China, however, Western fast-food chains, such as McDonald’s, KFC and Pizza Hut have turned the American concept of a “quick bite” into a significant social event.

China’s fast-food industry has grown to become the fifth largest in the world and has yet to slow despite the global economic crisis. In fact, for many of these companies, the China market offset the dismal third quarter numbers in the U.S. According to a MarketsMonitor report entitled “China Fast Food Analysis,” the fast-food industry in China is expected to continue its growth with a compounded annual growth rate of 25% until at least 2011, while its market share should increase to 9.3%, up from 7.4% in 2007.

“Fast food in China is comparatively expensive but still sales are growing because of two decades of double-digit economic growth which has led to growing income of Chinese people,” said Shushmul Maheshwari, chief executive of RNCOS, which lead the report. “Apart from this, changing and busier lifestyle is also responsible for the growing sales of fast food in China.”

Starbucks‘ business in China is faring better than it is elsewhere. Though the company does not release sales figures by country except for the U.S., the international success of Starbucks is partially due to the Chinese market, which boasts almost 200 stores in mainland China and an additional 300 stores in Hong Kong, Taiwan and Macau. Indeed, while Starbucks closed 600 stores in the U.S. in 2008, business in China is growing.

McDonald’s earnings were helped by the China market as well. It has had basketball star Yao Ming as a spokesman (and even outfitted store employees in Yao jerseys at one point). “The constant currency increase in revenues for the quarter and nine months was primarily driven by strong comparable sales in Australia and China, as well as positive comparable sales throughout the segment. In addition, expansion in China contributed to the increase,” McDonald’s third-quarter SEC filings read. The company opened their 1,000th store in China in November.

Similarly, Yum! Brands, the parent company of fast-food chains such as KFC and Pizza Hut, revealed that its third-quarter American sales fell by 16% while its China sales grew by 19%.

Yum also downsized its U.S. operations in November, cutting several hundred jobs. Yet in China, which prominently leads Yum’s international operations, business is expanding. An increasingly busier lifestyle is one of the contributing factors to Chinese current fast food cravings.

Xi Xiaojue, a weekly customer of Shanghai fast-food restaurants, says she goes to these places because “it’s convenient, fast and sometimes I can’t think of anywhere else to go.”

Fast is correct. According to the KFC, China division, customers’ orders are ready in 90 seconds. And as these stores appear on more and more urban street corners, it’s getting easier to find one of these restaurants as well.

Another reason for the popularity of Western fast food is the rise in China’s economy, which boosts the amount of middle-class Chinese who can afford the Western fast-food experience. Though these restaurants aren’t particularly trendy in the U.S., in China, they are upscale brands..

Prices at McDonald’s in China, for example, are not lower than they are in the United States. And in a country where the per-capita GDP is still one-ninth of what it is in the U.S., a trip to McDonald’s puts a much larger strain on the wallet.

Dai Jiajie is not a frequent visitor to fast-food places.

“It’s so expensive! And they should include more local flavors!”

KFC also increased its prices between 0.5 yuan (US$0.07) to 2.5 yuan (US$0.37) for certain menu items attributing the increase to higher commodity costs.

Despite the prices, many Chinese customers go to these fast-food restaurants for the atmosphere, which the companies work hard to cultivate.

“Starbucks is a gathering place for the entire community,” Kulthol said. “We care about giving our customers a personal and enjoyable experience in an environment where they can relax with a good cup of coffee, take a break from the outside world, or connect with friends.”

The atmosphere is the draw even at more elegant, expensive “fast-food” restaurants such as Pizza Hut. The table settings at Pizza Hut consist of porcelain plates and silverware. Its menu offers a wide selection of choices, from Peking Duck pizza to escargot to clam chowder. Launched in December 1990 in Beijing, Pizza Hut now has 400 franchises in China. 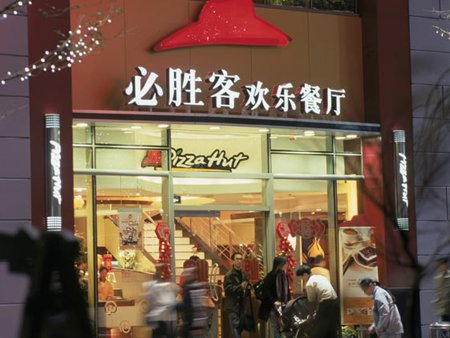 “The restaurants are also classier looking and with the comparatively high cost, I’m not surprised to see that it attracts couples with money,” said Dan Jones, a private English/ESL tutor who visited the Pizza Hut in Xi’an. “I don’t think anyone with any common sense would take their girlfriend to Pizza Hut for a special occasion in America.”

According to Pizza Hut’s China division website, a combo meal for two with pizza, appetizer, dessert, and drink costs 132 yuan (US$19.31) while with an additional salad and soup costs 145 yuan (US$21.21).

Despite the steep prices, many Chinese flock to these restaurants. But not all familiar American fast food chains are successful in China. The Taco Bell Grande experiment showed that China is not ready for some ethnic blends.

Yum! Brands, opened the first Taco Bell in 2003 in Shanghai, and followed with two more. However, Yum announced January of this year that all three restaurants will be closing.
“Its product menu was not according to the tastes of Chinese people,” Maheshwari said. “Thus, demand for Taco Bell products went down rapidly.”

Jason Barbacovi, a Seattle native who stayed a little more than a year in China, visited the Taco Bell Grande in Shanghai. He gave the fast-food chain credit for trying to recreate an authentic Mexican atmosphere.

“They said ‘Gracias’ to everyone on the way out, but that was the extent of the Spanish speaking,” Barbacovi said. “As far as the atmosphere, it was sort of like food-court Mexican, with the vaguely Latin-looking tiled tables and colors, for example. And of course the big sombreros, which, looked more like piñatas than hats.”

Barbacovi said that even though he had not had much exposure to authentic Mexican food, he did not enjoy his meal.

“My enchiladas came with corn and what were essentially home fries. I would say it was like a bad take-off of a U.S. Mexican restaurant. ”

Chinese may not be ready to accept Mexican fast food, but they are are slowly adapting to other aspects of the industry.

McDonald’s has opened 26 drive-through restaurants since the first one opened in Dongyuan in 2005 to keep up with the way affluent Chinese have embraced automobiles. However, many Chinese customers still do not understand the concept of a drive-through. They would often get their orders, park their cars, and go into the restaurant to eat their food.

“Since very few people in China have ever experienced any form of a drive-through experience, people must become familiar with it before they get efficient at it,” said McDonald’s devotee McChronicles, who writes a blog about his experiences at different McDonald’s around the world.

Western fast-food companies are not only changing the dine-in experience at the restaurants, they are also matching the busy lives of its customers by introducing home delivery. Chinese customers are now familiar with the concept since Pizza Hut opened 61 Pizza Hut Delivery outlets in China in 2008, up 49% from the previous year. Pizza Hut’s success inspired other pizza chains such as Papa John’s to expand their delivery service in China. It currently has 100 dine-in and delivery restaurants but plans to add 500 more stores over the next five years in China.

With such success in fast-food delivery, other chains that have not introduced the service in the U.S. are looking to develop delivery options as well. McDonald’s has invested in 300 mopeds for 42 Shanghai restaurants, and outsourced its delivery operation to a call center in Hong Kong. The order is then taken by two local firms in China and put into large rectangular backpacks carried by riders in red uniforms and hats with the McDonald’s arches.

As the Western fast-food chains introduce a bit of American culture through its burgers, pizzas, and fried chicken, the restaurants also appeal to the taste palettes of Chinese customers who prefer a bit more localized menu.

“By localizing the menu, the popularity of fast food companies is increasing in China,” Maheshwari said. “Major fast food chains like McDonalds and KFC are adopting this strategy to increase their market share as they are offering chicken (and not beef) in their menu which is preferred by the majority of Chinese consumers.”

Starbucks caters its menu to all types of customers in China.

The fast food restaurant with the most localized menu is KFC. Since its parent company Yum! Brands introduced KFC in November of 1987 in Tiananmen Square, its Westernized menu has expanded to include Chinese fare such as egg tarts, corn, Hong Kong style milk tea, and porridge. Their newest addition this year is youtiao, a deep-fried strip of dough that is usually eaten with porridge or soymilk during breakfast.

Being part of the Chinese lifestyle is very important to American fast-food companies. Aside from expanding its menu, these companies also want to leave their mark in the Chinese community.

“As part of a long-term commitment to support improved educational opportunities in China and to further support efforts toward curtailing the world water crisis, Starbucks Coffee Company invested 40 million yuan (US$5 million) to establish the China Education Project in September 2005. Also, Starbucks has donated a total value of 2,700,000 Yuan (US$395,112) to the Sichuan earthquake area,” Kulthol said.

KFC, on the other hand, sponsors three-on-three basketball tournaments and high school dance programs. KFC accounts for 86% of Yum’s presence in China. Hence, the restaurant’s popularity is not a surprise when its statistics reveal that KFC has 2,350 outlets in 465 locations all over China.

KFC’s rival, McDonald’s, also donated to earthquake relief in addition to sponsoring the Beijing Olympics. It also promoted the Olympics Champion Kids Program for children who wished to march in the Games earlier this year. Moreover, the chain has worked with Conservation International since 2008 to protect wild pandas, the national symbol of China.

Despite the numbers in the U.S., these companies are thriving in China. As the majority of Western fast-food chains in China are expanding at a quick pace, customers are not in a hurry to rush out of these places. Instead, they are slowly savoring the flavors while enjoying their experiences with their family, friends, and loved ones.

Yao Xu is a graduate of the University of California, Irvine with a degree in English.