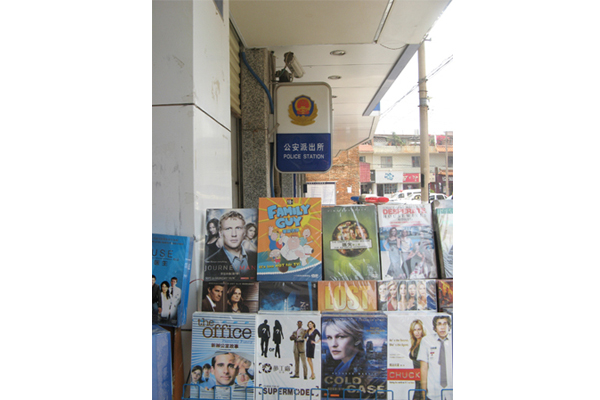 Where the Streets Have No Name Brands

Knockoff products are easy to find in China. Will lax regulation of intellectual property rights cripple the country’s development?

Knockoff Dolce & Gabbana purses, Louis Vuitton wallets, Gucci shirts and Abercrombie & Fitch sweatshirts — it seems as if every third stall has some variation or imitation of these usually pricy products.

The extent to which these fake products have infiltrated China reaches so far that even those who attempt to fight it engage in it. At a recent event in Beijing, a partner of a major intellectual property office casually asked another attendee if, while he was at the local bootleg DVD store, he could check if season four of Boston Legalwas available.

While the hugely discounted Marc Jacobs bags or complete Sopranos DVD sets seem enticing, the protection of intellectual property rights (IPR) is one of the most contentious issues facing the global economy today, and among the world’s major trading nations, China has had the most difficulty in advancing the legal protection of those rights.

“The theft of IPR happens worldwide wherever there is relatively lax enforcement and profits to be made from counterfeiters,” said James Zimmerman, chairman of the American Chamber of Commerce in China. “Given China’s significant role as a manufacturing base, there is much attention on counterfeiting and pirated goods.”

Proper policing is a challenge when few recognize the ill effects copyright, trademark and patent infringement have had on the economy as a whole. China is currently facing a significant problem in systemic official corruption; bribes and personal favors play an important role in the survival of China’s black market. Transparency International’s 2008 Bribe Payers Index, which ranks 22 of the world’s most influential economies, lists China as the second most pervasive offender of bribery and market corruption, behind only Russia.

To help address this, the Beijing Municipal Bureau of Public Security established an office in 2006 for the reporting of economic crimes. A phone hotline was set up for work units and individuals to report bribery connected to any intellectual property rights infringement. By April 2007, Chinese law enforcement officials had investigated almost 22 thousand cases of commercial bribery that involved over US$676 million.

Even ahead of the enforcement challenge, many companies, both foreign and domestic, find gaining proper legal status difficult; it is, however, a vital first step toward getting protection for their products.

Over the last thirty years, China’s legal system has been hard-pressed to keep pace with its rapidly developing economic sector. While the economy continues to grow, the legal framework to support a large and modern one has evolved slowly. Intellectual property rights were officially recognized in 1980, and the first real IPR law enacted, the Trademark Law, was only adopted in 1982.

“As we march(ed) through the 1980s, (and) particularly in the 1990s, and the foreign business presence in China grew,” said John Frisbie, president of the U.S.-China Business Council. “It became more and more of a trade issue, and one that was more and more raised by the U.S. government in its bilateral engagement with China.”

For the American film industry, pirated movies and illegal downloading in China have resulted in serious losses in revenue. According to the Motion Picture Association of America, U.S. film industries lost roughly US$6.1 billion dollars in 2005 to piracy, while the worldwide industry lost over US$18 billion. 62% of the losses come from physical sales of bootleg DVDs while the remaining 38% came from internet downloads.

Although the government pursues regular campaigns to stem such counterfeiting, the effectiveness of these missions is often questionable. The Silk Street Market is a tourist hotspot and considered a “must visit” in Beijing. Knock-off designer clothes and stolen goods can be purchased for extremely low prices.

“Why do you need to ask if it’s real or fake?” remarked one saleswoman at the Silk Market. “Does it even matter?”

A question of whether or not intellectual property matters, however, is in part a cultural difference that shows even when the government attempts to curb knockoff sales. In his highly influential book, To Steal a Book is an Elegant Offense, William Alford claims that certain characteristics of Chinese political culture explain why the country has been slow to develop a domestic system of intellectual property law. Alford notes that the Chinese state “was focused far more on political order and stability than on issues of ownership and private interests,” highlighting the country’s cultural tendencies toward collective development over individual rights.

In November 2006, Beijing launched a brief crackdown ahead of the third Forum on China-Africa Cooperation, which brought representatives from 35 African countries to the city. Retailers were told by the police to get rid of any products with foreign brand names, yet goods were, for the most part, stuffed into bags that could be shown at a moment’s notice to shoppers who asked to see them.

The Silk Street Market itself was the center of controversy in 2005 when Prada, Chanel, Louis Vuitton, Gucci and Burberry sued Beijing Xiushui Haosen Clothing Market Company (the market’s operating company) for RMB 2.5 million (US$310000) in compensation after failing to stop the sale of counterfeit goods. The Beijing No. 2 Intermediate People’s Court ordered the company to pay RMB 20,000 (US$2500) to each of the plaintiffs in 2006. While legal recourse did achieve a victory in this case, the punishment was wholly insufficient in deterring future violations.

Currently, criminal penalties for counterfeiting are only levied when the contraband seized exceeds more than RMB50000 or results in an illegal gain of more than RMB30000, which leads to prison time. Below that level, the only punishment given is administrative fines that, “in essence, become the cost of doing business,” Frisbie said. This leads to a system in which counterfeiters spread out their inventory until the most that can be seized at any time will only result in a fine.

BusinessWeek recently noted that intellectual property fraud is also a burgeoning problem for the U.S. military. Fake microchips have increasingly found their way into some of the most advanced technologies now in use by American fighting forces. Counterfeit chips, originating from Chinese bazaars to making their way to questionable arms brokers in the U.S. and finally to weapons manufacturers, have found their way into airplanes, ships and advanced communications systems. Last January, chips falsely identified as originating from a California manufacturer were found in four F-15 fighter jets, elevating concerns over the consequences of shoddy equipment and even the possibility of espionage.

“About a decade ago, government officials in China felt like the IPR issue was one that was of importance to American companies,” Frisbie said. China didn’t see it as a top priority, however, “because they were still relying on low-cost labor to make exports and that was what they were competing on. As that low-cost labor surplus is running out, they’re starting to see intellectual property rights as an important part of moving up the value chain.”

The lack of results from previous crackdowns performed by the Chinese government has left foreign companies feeling uneasy about heavily investing in China. In a survey of USCBC’s roughly 250 member companies in 2007, two-thirds said that the Chinese government’s “lack of viable IPR protection” affected their willingness to do business in China. Some companies will even take up the perceived slack in IPR enforcement.

“I am aware of a lot of companies who will spend pretty significant sums of money on building an IP protection department in their operations there, and actually doing investigatory work themselves, recognizing that China’s own enforcement authorities may be overtaxed or under-experienced,” Frisbie said.

Gathered information is often passed onto the police, subsequently leading to raids. At the same time, Frisbie said American companies can’t just substitute for the Chinese government and policing, but a number of corporations have done just that because they’ve recognized that there isn’t the capacity in the system.

The absence of a solid protection system stands to have a long-term impact on China’s film, music and software industries, especially when countered by foreign competition whose home countries largely protect intellectual properties in their domestic markets. The MPAA claims that China’s local film industry lost $2.7 billion to piracy in 2005.

“The overall system on a national basis is still a work in progress and requires improvement to inter-agency coordination, an increase in deterrent penalties, an increase in case transfers for criminal prosecution and an increase in agency capacity to be effective at the level that truly decreases the level of counterfeits in the market,” Zimmerman said.For a “Made in China” label whose reputation has recently suffered from several high-profile embarrassments, the installation and enforcement of a proper intellectual property protection system is both advantageous for international perceptions of the country and local companies. Counterfeit parts, from automobile brakes to airplane chips, can have serious safety repercussions, further damaging the country’s reputation as a dependable source for goods and services. As China seeks to move beyond its image as the world’s manufacturer and delve into design and development at home, an adequate system of intellectual property protection will be a necessity for fueling domestic innovation.

Zachary Franklin graduated from the University of Southern California in 2007 and currently works as a journalist in Beijing.

Tom Worger is a graduate student at Columbia University.