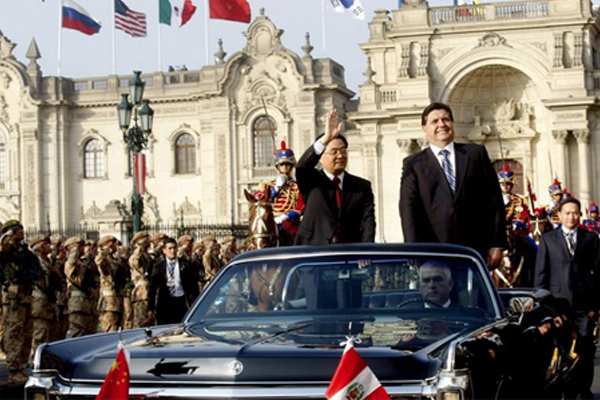 Until last November, China’s relationship with Latin America was undefined. But with the release of a policy paper on the region, China made it official.

By issuing a policy paper, China for the first time demonstrated that it views Latin America from a strategic plane. Within the document, the Chinese government lays out its official stance on the region and reiterated that it seeks “a comprehensive and cooperative partnership” of equality, mutual benefit and common development with all of Latin America, including the Caribbean.

“What we’re seeing is a prioritization of Latin America as an area of the developing world where they need to pay focus and attention,” said Daniel Erikson of the Inter-American Dialogue in Washington, D.C.

This move signifies that China and Latin America are beyond the courtship phase and have solidified their relationship – a relationship that focuses on trade, energy, and diplomatic recognition.

Jiang Shixue, Vice President of the Chinese Association of Latin American Studies in Beijing, argues the region is important to China’s vision of a harmonious world, a world of peace and tolerant of national differences. “China needs to unite together with countries in all parts of the world to achieve this,” he said.

Fostering economic exchange and growth is key to this. Trade in 2007 between both regions broke a $100 billion benchmark set by President Hu Jintao in 2004. Bilateral trade for 2008 increased 39% from 2007 to over US$143 billion.

Through increased ties with the region, China enjoys greater access to minerals, energy, and a secure food supply from Latin America. It needs, for example, ready access to minerals such as iron and copper from Brazil and Peru respectively to supply China’s factories.

In addition, Latin America is an important source of many food products. Brazil’s soybeans, Peru and Chile’s fishmeal, Chile’s grapes and wine and Argentina and Brazil’s poultry products are major contributors to Chinese grocery shelves and processed food exports.

Energy is another concern. China currently imports about half of the crude oil it consumes, and these numbers are still rising. As a big and still-growing energy consumer, China looks to Venezuela’s oil reserves to supplement supplies it gets from the Middle East and Africa.  Current Chinese oil imports from Latin America amount to 330,000 barrels per day.

This past February, Chinese Vice President Xi Jinping concluded an energy deal with Venezuela to double their joint investment fund to $12 billion and increase energy exports to China. The Vice President’s visit was part of a 5-nation tour to the region.

“China’s demand for oil will double at least in the next fifteen years and its dependence on imported oil will rise to 65% or so by 2025,” said William Ratliff of the Hoover Institution. “If Venezuela really sends as much as it promises, by 2012 Venezuela will be providing 15 or so percent of China’s oil imports, and since Venezuelan production is not going up, much of that is likely to come from what Venezuela now sends to the U.S.” This would be a huge jump from existing figures, as currently China only receives about 5% of its oil imports from the region.

But China’s investments in Latin American countries aren’t always what they seem. China’s regional investments totaled US$1.89 billion for 2007, with the bulk going to infrastructure building. However, it is possible for Chinese investors to go to offshore tax havens in the Caribbean and bring back the capital without every actually investing anything. Known as “round-tripping,” figures in a U.S. congressional report show that in 2005, 96% of China’s US$11.5 billion foreign direct investment in Latin America went to these Caribbean tax havens.

China’s interests in Latin America, though, aren’t just economic. Trade and energy issues aside, Latin America is vital to China as a major diplomatic battleground with Taiwan.

Twenty-one countries in the region currently have formal diplomatic relations with China. The other 12 countries continue to formally recognize Taiwan’s government. However, without China’s economic clout, Taiwan has increasingly relied on a practice known as “dollar diplomacy”— giving financial support to these countries to encourage recognition of Taiwan.

During the administration of President Chen Shui-bian, Taiwan donated $30 million to Nicaragua for the construction of a thermal fire power plant to help relieve an energy shortage. Taiwan also provided $1.1 million for a project to alleviate hunger that was sponsored by the Nicaraguan first lady.

Taiwan has also given Paraguay, its only South American ally, over $30 million for housing projects, $20 million for a new congress building and more money for scholarships. Taiwan has also become Paraguay’s biggest bilateral creditor after two Taiwanese banks offered that country a US$400 million loan.

However, with Ma Ying-jeoh’s election last year, the government has pledged to stop this dollar diplomacy and instead work to maintain the friendships already in place as opposed to seeking out more, as Chen did. During his August 2008 trip to the region, Ma announced that he did not plan to make any monetary grants to the region during his trip, and instead would begin a policy of processing such funding through governmental channels, a move that would effectively eliminate Chen’s practice of dollar diplomacy.

Yet these friends are still extremely valuable to Taiwan. “Because 23 countries recognize Taiwan, one less country would be a tremendous shock to Taiwanese voters,” said Lin Zhongbin, a professor at Taipei’s Tamkang University.

But as China grows more powerful in the region, Taiwan’s foothold may weaken, causing it to lose allies and furthering animosity between China and Taiwan. However, some argue that this situation may not be as problematic as it appears.

According to Erikson, there won’t be conflict in the short term. “The new government of Taiwanese President Ma wants to improve relations between China and Taiwan and so, we’re seeing a reduction of tensions in the Strait,” he said.

Lin further adds that it’s not always in China’s interest to anger Taiwan.

“Beijing has learned over the past decade if they did something to make people in Taiwan unhappy, it helps the pro independence party,” he said.

The U.S., for its part, has been relatively absent in the region in recent years, giving China the opportunity to move in.

“The Bush administration had every intention to engage Latin America during the first term,” said Gonzalo Paz of George Washington University’s Elliott School of International Affairs in an email. “But September 11th changed the priorities and a negative agenda of immigration and drug-trafficking became the de facto issues for the region.”

Ratliff also agrees that the U.S. absence made Latin America more willing to deal with the Chinese.

“Unlike President George W. Bush, Chinese President Hu Jintao talked about a wide range of issues that concern Latin Americans using the ‘win-win’ connection,” he said. “Unfortunately, a few countries have become a bit cynical because things were either promised or seemed to be promised that didn’t materialize and the investments have either been ‘win-semi-win’ or ‘win-lose.'”

This has been cause for concern to many in the U.S. government. “After President Hu Jintao’s successful trip to Latin America in 2004, there was a growing concern about China’s activities in a region that the United States historically considered its own sphere of influence,” Paz said.

The Obama administration has demonstrated concern as well. During her confirmation hearings, then Secretary of State designate Hillary Rodham Clinton stated that the United States would return to a policy of “vigorous involvement, partnership” with the entire region, including the Caribbean. She also stated the administration would work with Latin America on a “new energy partnership around shared technologies and new investments in renewable energy” at the April summit.

But Jiang was quick to assuage fears, standing by the oft-heard CCP policy of noninterference. “China never wants to expand its sphere of influence in another part of the world,” he said. “While the U.S. would not be very happy to see that all Central and Caribbean countries have relations with the PRC, it [China] won’t interfere very heavily with the policies of these countries.”