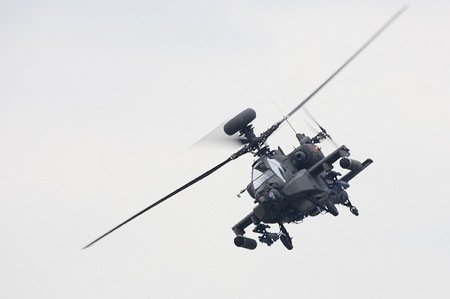 Getting Back to Normal: The U.S.-Taiwan Arms Sale Seven Months Later

Just seven months after the October announcement of a $6.5 billion arms package to be sold to Taiwan by the United States, relations among China, Taiwan and the United States have begun to return to their previous states.

Just seven months after the arms sale Beijing said “contaminated the sound atmosphere for [US-China] military relations,” things are getting back to normal.

The October announcement of the $6.5 billion arms package to be sold to Taiwan by the United States initially yielded a rift with China. Beijing immediately canceled all military exchanges with the United States and said the U.S. had broken an agreement set forth in the three joint communiqués. It also warned of the negative effect it would have on warming Taiwan-China dialogue and that the sale of missile defense systems, attack helicopters, surveillance aircraft, anti-ship missiles and command systems could disrupt the “hard-won advances” that had been achieved in cross-strait relations.

Since then, however, the U.S. and China have resumed direct military talks; the U.S. Navy sent a missile destroyer to attend a international fleet review in celebration of a Chinese People’s Liberation Navy anniversary; and Taiwan and China have signed 13 agreements, including one allowing for daily direct flights between China and Taiwan for the first time. Meanwhile, Taiwanese President Ma Ying-jeou asked the U.S. to sell more arms during an April speech to a Center for Strategic and International Studies audience. Via a video link, he told the Washington audience that the October sales was evidence of the relevance of the now thirty-year old Taiwan Relations Act (TRA). Ma argued the sales symbolized Taiwan’s special partnership with the U.S.

“I urge the United States to not hesitate to provide Taiwan with the necessary defensive arms as stipulated in the TRA,” Ma said.

The Chinese government remains cautious of what the October arms sale meant and what it may portend of possible future sales and U.S.-Taiwan relations. The sale was only half of what Taiwan requested, but it was first major arms sale to Taiwan by the United States since 1992.

The original request, made in 2001, included 60 Black Hawk helicopters and diesel-powered submarines and was valued at nearly $12 billion. The United States granted nearly every one of Taiwan’s requests, but the sale was long delayed because of opposition in Taiwan’s legislature.

Initially postponed by a variety of factors including an economic downturn in 2001 and a growing national debt, the package also ran into obstacles as a result of Taiwan’s domestic politics.

The Democratic Progressive Party’s (DPP) takeover of the executive office in 2000 left many in the bureaucracy and parliament uncertain of which party would take power next. Meanwhile, its opposition party, the Kuomintang (KMT), which controlled parliament, postponed legislature approving an arms sale in an effort to prevent the DPP and its then-leader, Chen Shui-bian, from achieving victory.

“The KMT and its allies may not want President Chen to get credit for more arms deals with the United States,” James Nolt, a senior fellow at the World Policy Institute, said at the time in an interview with Asia Times. “They can do that by legislatively limiting what he can spend on arms. The KMT also may wish to limit Chen’s arms purchases in order to discourage his drive toward declaring Taiwan independent of and equal to mainland China.”

Before the KMT’s candidate Ma was inaugurated in May of last year, the sale had also run into delays on the American side. The Bush administration, in part, held it up to send a clear signal of disapproval to Chen, who had repeatedly tried the Bush administration’s patience with his push for the island’s independence. He held, for example, a highly sensitive referendum on Taiwanese independence in 2004 against the wishes of the United States. Washington also viewed Chen as having broken his pledge to not abolish the National Unification Council in 2006.

After Ma’s inauguration in May 2008, the U.S. froze congressional notifications of arms sales to Taiwan again in June 2008 when Beijing and Taipei held their first official talks in more than a decade in an attempt to not adversely affect the negotiations.

But with just three months left in his administration, Bush announced his intent to Congress to sell the arms—though a significantly reduced number from what was originally requested—to Taiwan, leaving many arguing over whether Bush pushed it through before his successor took office, relieving either a Republican or Democratic president of a burden as well as China’s anger.

“It seems that the Bush administration decided to sell weapons before it leaves office,” Wu Chunsi, an expert on ballistic missile defense at the Shanghai Institute of International Studies, said.

Denny Roy, a senior fellow at the East West Center in Honolulu, agreed.

“The Bush administration seemed to hold back the process temporarily to allow the revival of cross-strait negotiations to take root, but then rushed to get the sale finalized so that it could go through before the end of Bush’s presidency,” Roy said. “Bush’s advisors may well have persuaded him that completing the sale before the new president takes over would be a wise move.”

But Alan Romberg, the former principal deputy director of policy planning at the U.S. State Department, said he didn’t believe the sale had anything to do with America’s political calendar.

“I consider it unlikely in the extreme that the Bush administration chose to send the notification to Congress in order to relieve Obama of the burden of doing so,” he said. “[T]hat consideration seems highly irrelevant to Bush’s decision.”

Some say the sale’s timing was purely a necessary military decision and that Taiwan needed the weapons to defend itself from the mainland.

“For Taiwan’s security, Taiwan still has to acquire adequate defense capabilities,” said Shane Lee, a political science professor at Chang Jung Christian University in Taiwan. “If your defense is too weak, there is the danger of having war.

As expected, the mainland adamantly disapproved of the sale, arguing it was a clear violation of the United States’ policy toward China.

“The U.S. government’s agreement on arms sales to Taiwan severely violated the principles set in the three joint communiqués between China and the United States, grossly interfered in China’s internal affairs, endangered Chinese national security and disturbed the peaceful development of cross-strait relations,” said Liu Jianchao, a Chinese Foreign Ministry spokesperson, during a press conference after the sale.

The three joint communiqués, issued by the U.S. and the People’s Republic of China between 1972 and 1982, included the United States’ recognition of the PRC and an U.S. declaration of its intent to gradually decrease its arms sales to Taiwan. They also contained an assertion of the “One China” policy, but both sides disagreed on what it meant.

And the Beijing government has criticized Washington for its arm sales to Taipei ever since.  This time, however, was especially momentous; the October sale was the largest arms sale to Taiwan since 1982, when the final communiqué was signed. China immediately canceled all high-level military exchanges with the United States and didn’t come back to the table until the end of February.

Though it officially recognizes Beijing, the United States has committed itself to Taiwan through defense weapons. The Pentagon said the sales were consistent with the Taiwan Relations Act, which requires the U.S. to “provide Taiwan with arms of a defensive character” and help protect it from any forces that would “jeopardize the security, or the social or economic system, of the people of Taiwan.” The act, which was adopted in April 1979, was given a continuing resolution of support by Congress in late March in recognition of its 30th anniversary.

In recent years, the Chinese government has been strengthening the nation’s military with annual double-digit defense budget increases, much of which has been focused on Taiwan. China currently has over a thousand ballistic missiles targeting the island. China has also been acquiring advanced fighter jets from Russia as well as developing its own weapons production capabilities.

China claims Taiwan is under its jurisdiction and has passed legislation authorizing the use of force if it declares formal independence. The Anti-Secession Law, passed in 2003 by the National People’s Congress on the mainland, gave the Chinese government authorization to use force if Taiwan is separated from the mainland or if all peaceful means of unification have been exhausted.

Some feel the timing of the sale sent mixed signals to the mainland, especially because many of its leaders thought cross-strait relations were moving further from war. Ma, who assumed office a year ago in May 2008, has long pledged to improve relations with the mainland as well as protecting Taiwan’s interests.

“This is really the question that the mainland China cannot understand,” Wu said. “We are encouraged by the progress across the Taiwan Strait and the steady development of China-U.S. relations, and therefore are even more disappointed at and angry (about) the arms sale.”

Others say the decision not to sell everything Taiwan requested was an attempt to alleviate China’s fury.

“I believe this reflected a desire to demonstrate that, while the United States would continue to sell arms to Taiwan…” Romberg said. “It also was supportive of the improving cross-strait relationship and did not desire to upset the dialogue.”

Dennis Wilder, the then-senior director for East Asian Affairs on Bush’s White House National Security Council, seemed to reflect a similar tone. “We were eager to achieve a golden mean—a robust package of arms sales that met Taiwan’s immediate defense needs but was not perceived in Beijing as undermining the progress in cross-strait relations,” he wrote in an e-mail response to Reuters.

“I believe we achieved that goal,” he added.

However, what happens next under the Obama administration is still up in the air.

As expected, it did not adjust the arms sales package when it took office.

“I don’t think there’s been any change in that,” said David Sedney, the U.S. deputy assistant secretary of state, said in February at the Defense Policy Coordination Talks, the first high-level conversation since October.

Beijing has told Washington that its arms sales to Taiwan still remain an obstacle in the resumption of high-level U.S.-China military exchanges.

“Frankly speaking, it will take a long time to restore our military exchanges as not a single obstacle in military ties has been removed so far,” said Qian Lihua, the Chinese Defense Ministry’s head of foreign affairs, to Xinhua News Agency.

“This was the single best set of talks I’ve been to,” he told reporters at a press conference, estimating he has taken part in more than 50 rounds of military conversations since 1991.

The controversy, however, has since significantly quieted down. The topic of Taiwan dropped nearly off the agenda when U.S. Secretary of State Hillary Clinton visited Beijing in February. Instead, the focus was on North Korea, Mideast policy, climate change and energy security. In Taiwan, President Ma expressed optimism in the same speech for cross-strait relations as well as cross-Pacific.

“The policies of my administration will drive the impetus to move cross-strait relations forward and beyond the hostility and brinksmanship witnessed in these past eight years,” he said.

Hao Li is a sophomore majoring in International Relations at the University of Southern California.