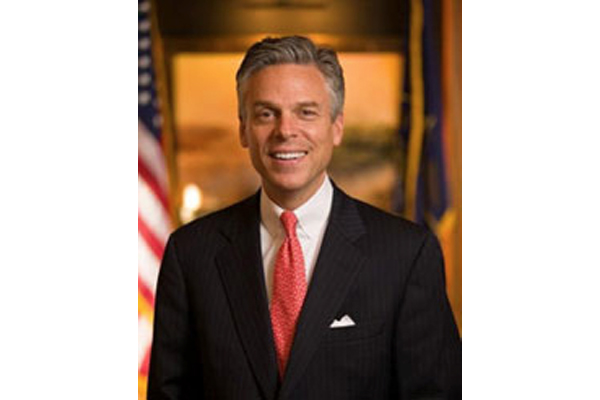 According to his biography on Utah’s government site, Governor Huntsman earned a bachelor’s degree in International Politics from the University of Pennsylvania. His public service career began as a White House staff assistant to President Ronald Reagan and has included senior appointments in the Commerce Department and the State Department, as well as service as Deputy United States Trade Representative. He has twice been unanimously confirmed by the U.S. Senate as a U.S. Ambassador. He speaks fluent Mandarin Chinese.

Good morning, everybody. I am here to announce today the distinguished public servant I’m appointing as our nation’s new ambassador to the People’s Republic of China. I’m making this appointment mindful of its extraordinary significance. Given the breadth of issues at stake in our relationship with China, this ambassadorship is as important as any in the world–because the United States will best be able to deal effectively with global challenges in the 21st century by working in concert with China.

There are few countries in the world with a past so rich or a future so full of possibility as China. With a vast population, a growing economy, and far-reaching influence, China will have a crucial role in confronting all the major challenges that face Asia and the world in the years ahead.

And that’s why we’re working with the government of China to stem the financial crisis that’s devastated economies around the world and help lay a foundation for sustainable growth and lasting prosperity on both sides of the Pacific. That’s why I’ve spoken with Chinese President Hu Jintao about a number of regional threats, including the situations in North Korea and Pakistan. And that’s why we will continue working together with China on a whole host of global challenges–ranging from energy and climate change to public health; from nuclear non-proliferation to terrorism and violent extremism.

I believe there’s much to be gained from a closer, working relationship with China. But improved relations with China will require candor and open discussion about those issues where we don’t always agree, such as human rights and democracy and free speech. And it will require that each of our nations play by the rules in open and honest competition.

And that’s why this ambassadorship takes on such importance. I can think of no one better suited to take on this assignment than the governor of the great state of Utah, Jon Huntsman.

When I asked Jon to accept this critical post, I knew it would require a sacrifice on the part of his family, and I want to thank Mary Kaye and all of their children for making this possible. I knew it would require a sacrifice from Jon–who will be giving up a seat as a popular governor, having just been reelected to a second term. And I hope the good people of Utah will forgive me and understand how proud they should be of their governor for his willingness to answer his nation’s call.

Finally, I knew that because Jon is not only a Republican, but a Republican who co-chaired my opponent’s campaign for the presidency, this wouldn’t be the easiest decision to explain to some members of his party.

But here’s what I also know. I know that Jon is the kind of leader who always puts country ahead of party and is always willing to sacrifice on behalf of our nation. That’s what Jon has always done. Throughout his career, Jon has shown a willingness to move beyond the old ideologies and stale debates that all too often bring progress to a standstill. Time and again, he’s brought people together across party lines to overcome our common challenges and to move our nation forward.

What Jon brings to this post isn’t just a steadfast commitment to advancing the interests of the American people; it’s a lifetime of knowledge and experience that will help advance this important partnership. Jon brings to this post experience as a former ambassador to Singapore, who’s intimately familiar with many of the most pressing challenges confronting Asia. He brings experience both in the private sector and as Deputy United States Trade Representative to Asia and Africa, where he stood up for America’s economic interests abroad. And Jon is well prepared to build a partnership that reflects a new understanding between our two countries because he’s lived in Asia three times and is fluent in Mandarin Chinese.

That’s the kind of ambassador we need in China–an ambassador who has a respect for China’s proud traditions, who understands what it will take to make America more competitive in the 21st century, and who will be an unstinting advocate for America’s interests and ideals. With Jon Huntsman representing the United States in China, I’m confident that we will launch a new era of partnership between our two nations that will advance our shared dreams of opportunity and security in America, in Asia, and around the world.

So I’m extraordinarily pleased to announce that Jon Huntsman will be our ambassador to China, and I can think of no more important assignment than creating the kinds of bridges between our two countries that will determine the well-being not just of Americans and Chinese, but also the future of the world.

So, with that, I’d like to have Jon say a few words. Thank you, Jon.

Gov. Huntsman: Well, Mr. President, thank you for those very kind and gracious words. I never expected to be standing here under the inquisitive gaze of George Washington, and equally inquisitive gaze of my wife. Nor did I expect, as national co-chair of Senator McCain’s presidential campaign, to be called into action by the person who beat us.

But I grew up understanding that the most basic responsibility one has is service to country. When the President of the United States asks you to step up and serve in a capacity like this, that, to me, is the end of the conversation and the beginning of the obligation to rise to the challenge.

I stand here in my final term as governor with plenty to do. I wasn’t looking for a new job in life, but a call from the President changed that.

So, Mr. President, I humbly accept your call to service, and I understand that doing so will carry with it some unique challenges.

So, first and foremost, I want to recognize my wife and best friend, Mary Kaye, and my family, many of whom are here today, who have always been willing to heed the call of public service. I am here today solely as a result of their love and support.

Second, I owe a tremendous debt of gratitude to the people of the greatest state in America. Life’s greatest honor has been to serve the people of Utah as their 16th governor.

Finally, I must thank you, Mr. President, for your trust and confidence in me and my family’s ability to contribute meaningfully to one of America’s most important strategic bilateral relationships. You have my commitment that we will take the U.S.-China relationship to new heights, focused not just on that which divides us, but more importantly, on that which unites us, knowing that this will be critical for lasting peace and prosperity for citizens on both sides of the Pacific.

I’m reminded of my favorite Chinese aphorism. It goes something like this: [Speaks in Mandarin Chinese] “Together we work, together we progress.” This, more than anything else, I think captures the spirit of our journey going forward.

Thank you so very much.

Comments on the selection of Huntsman:

“China traditionally has offered a politically convenient pretext for the playing out of political agendas, whether of a partisan nature or of an issue-specific nature.” — Robert Kapp, former president of the U.S.-China Business Council

“What we know is that he is not an ideologue, he is pragmatic, and that sounds good…..  Huntsman. “I’m just worrying about the trade issues.” — Zhang Liping, Institute of American Studies, Chinese Academy of Social Sciences (Kapp and Zhang were quoted by Bloomberg)

“The United States has sought opinions from the Chinese side through diplomatic channels and China is handling the issue according to relevant procedures and international conventions.

“We hope that a new appointee will play a positive role and work to the advantage of the development of bilateral relations in a new era and strengthen the friendship between the two peoples.” — China’s Foreign Ministry, according to Xinhua

“Huntsman will be very well placed, being a political player, to listen and talk to them and pass messages back and forth — probably better than most ambassadors.” — Chris Nelson of the Nelson Report

“Huntsman is no panda-hugger….  He knows the country well, but he will be firm. And it will also help to continue some bipartisan spirit for a relationship that is important but not easy.” — Michael J. Green, National Security Council senior director for Asia during the Bush administration (Nelson and Green were quoted by the Washington Post)