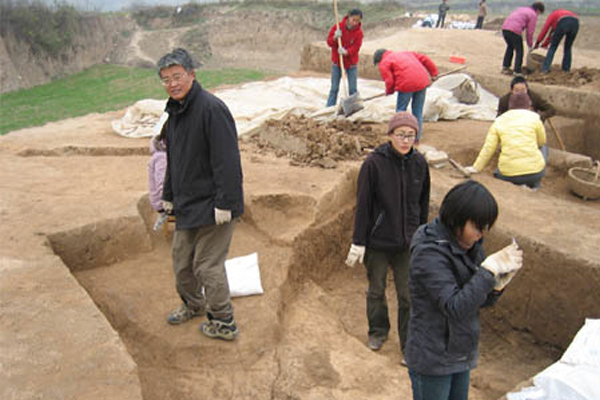 What Lies Beneath, The Treasures Untold

By Michelle ThompsonMay 7, 2009 No Comments

Archaeology in China has a long and storied past, but the last decade has seen a major boom. Regulations and collaborations are sometimes problematic for foreign archaeologists who seek to work in China.

While the world watches China race into the future, Lothar von Faulkenhausen is focused on the past.

The UCLA archaeologist is involved in several archeological digs in China and is interested in how the past relates to the present. “We are hoping to find evidence of…how the salt industry may have triggered the development of states and what archaeologists call social complexities, hierarchical societies with significant concentration of wealth,” he said. “We have already learned a great deal that was previously unknown about the settlement history of this part of China.”

Von Faulkenhausen is just one of many foreign scholars interested in China’s archeological past. Archeologists have uncovered countless invaluable finds in China since the 1920s, but past eras have been of great importance to the Chinese for centuries.

“Archaeology is of course in one sense a modern science. It has its origins in the West and it was introduced to China in the 1920s. But China has its own…centuries long tradition of systematic research into the material heritage of the past,” he said.

Over the past decade, the Chinese government has worked to protect cultural relics. In 1996, the State Council listed 770 cities with valuable cultural sites, ancient buildings, and historical sites. More than 7,000 historical and cultural sites are listed as being under provincial protection.

China continues to prioritize archaeological sites, specifically those that are under-threat due to irrigation projects, highway construction, and urban development.  “[The government] focuses on mitigating effects on urban development and other economic developments,” said Rowan Flad, a Harvard University archaeologist.

Initially focusing on Paleolithic (2.6 million years ago to around 10,000 BC), Neolithic (9500- 6000 BC) and Bronze Age (3300-1200 BC) sites, archaeologists have uncovered many major finds in China. The most famous of these is the Peking Man site, discovered in 1935 by Jia Lampo at Zhoukoudian, about 50 kilometers from Beijing. More recently, in 1973 a site at Mawangdui in Hunan yielded several important medical and philosophical silk texts, including a copy of the Dao De Jing, the seminal Daoist text, thus permitting scholars to date it earlier than previously thought and permitting new translations.

China has also proved to be rich in Neolithic sites, providing archaeologists with valuable information on the era when humans began to develop tools, culture, and animal domestication. “The most important finds in the last ten years have been work on the early Neolithic. For example, analyzing early pottery in China [helps] to understand the foundation of the Asian agricultural system,” said Joshua Wright, a post-doctoral fellow at Stanford University. “Early pottery and farming tools help us to understand some basic things about the past, such as what people ate and what they could make with their technology.  Food and technology are very important to people’s idea of themselves.”

Other recently published findings include work on farming, plant domestication, meat consumption, and environmental change, all during the Neolithic period in China. “The early Neolithic is a time when a lot of things that become important later in Asian societies first appear,” Wright said.

Until the late 1980s, these sites were almost exclusively excavated by Chinese archaeologists. But with Deng Xiaoping’s reforms, more foreign scholars were allowed in.

“Chinese archaeologists were invited to visit the United States…and they began to realize, in terms of methodologies and archaeological theories, China was in danger of missing the boat, because of  40 years of isolation preceding the opening of China,” Von Faulkenhausen said.

“That was a major shift in the field and since that shift occurred, for the last 20 years now the procedures through which non-Chinese scholars get permission to do work has changed fairly frequently,” added Flad.

Even so, China is not teeming with foreign archaeologists. The vast majority of artifacts are still discovered by Chinese archaeologists. In addition, many finds have been made accidentally by construction workers.

“There is so much construction going on around China, things are accidentally being dug up all the time. None of the salvage excavations takes place with the help of foreign archaeologists,” said Roderick Campbell, a post-doctoral fellow at Brown University.

However, foreign scholars have also made great contributions to the field. Yet they are subjected to several rules and regulations made by the Chinese government. These are designed to promote Chinese scholarship. One mandates requires that findings must be published in Chinese journals before they can be published anywhere else. A second is that all  foreign scholars must work with Chinese researchers.

Von Faulkenhausen notes that the mandate to collaborate offers benefits. “We must collaborate with the Chinese institutions when we come in,” he said. “This is actually an advantage to have the opportunity to collaborate with Chinese colleagues who have really wonderful experience who know a great deal of things that we couldn’t possibly know coming from the outside who are willing to share this with us.”

Flad added that foreign-led archaeology projects that “[have] been published broadly over the last ten years have been involved collaborations between Chinese institutions, sometimes universities, sometimes local institutions of archaeology.”

Flad has personal experience with such collaborations through his work in Sichuan over the past decade. Working with Peking University and the Sichuan Provincial Institute of Archaeology, Flad’s research looks at the distribution of settlements during the Neolithic and Bronze Ages as well as different salt-production sites. 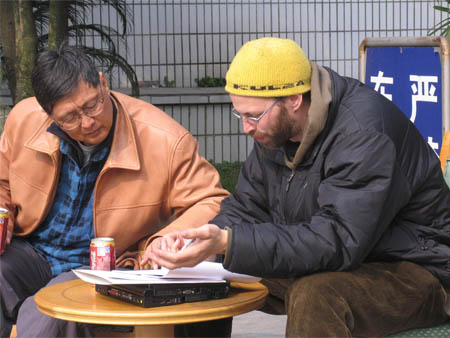 Although China has a lot of archaeological potential there is still a gap between the amounts of historical progress that can be done when there are not enough people to excavate.  “Relative to the amount of archeology that needs to be done there [is] a small number of people,” Flad said.

But collaborating teams from opposite ends of the globe can run into problems. Some of the challenges in collaborating stem from language and cultural barriers. “It was tense at times to work, methodologically tense because the two sides of the organization of the operation, the American side and the Chinese side have very different ideas about how the project should be done… so it made it a curious experience,” Wright said. To fix the problem, he said, they had to negotiate frequently.

However, he has also had success with collaborators whose English proficiency made communication and collaboration much easier. “This made the dynamic of the project different,” he said. But still, the project wasn’t without problems. “Any work in China requires a tremendous amount of negotiation… it requires different relations with people,” Wright said.

Another hurdle is the disparity in technological resources. Despite the post-isolation period of Chinese collaboration with the west, China has yet to adopt many modern techniques widely used by western archaeologists. “We use geophysical techniques, magnetometry, and so forth to get a general picture of the distribution of archaeological anomalies below the ground without excavating,” Flad said. Often, foreign researchers find that their Chinese counterparts lack training in these techniques.

Flad is particularly concerned about developments in geophysical techniques. “There is still very little of that sort of work going on…There may possibly be just one other full-time worker focused on geophysical archaeology,” Flad said.

But as scholars work together, they can share new ideas and techniques. Von Faulkenhausen has already seen the fruits of academic exchange in terms of archaeological methods. “Thanks to the widespread application of settlement archaeology methods in various parts of China. This kind of evidence is gradually coming out of the ground,” he said.

With growing cooperation between foreign and domestic scholars the future looks promising as researchers continue to make groundbreaking discoveries.

“China is a huge country that has a very long history and even longer prehistory all of which can be approached by archaeology,” Flad said.

“There is an infinite amount of work to be done.”

Michelle Thompson is a graduate of University of California, Los Angeles.