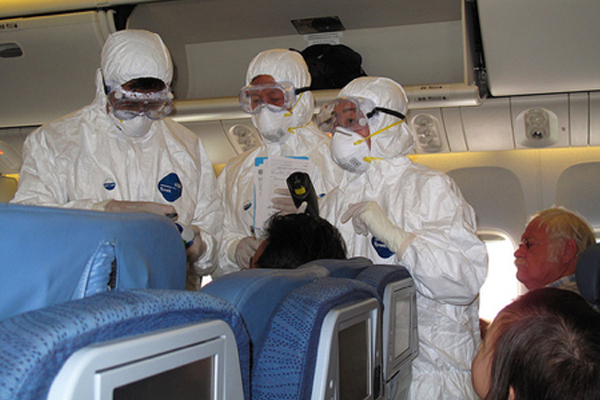 In and Out of Swine Flu Limbo

A reporter for US-China Today recounts her experience in quarantine in China.

On May 13, 5,068 H1N1 influenza, or swine flu, cases had been confirmed in the U.S. and Mexico. Another 660 cases had been confirmed in 31other countries. More than 60 people had already died from the illness and international and national health officials were concerned. Two weeks earlier, U.S. Vice President Joseph Biden said he’d told his family not to fly and to otherwise avoid confined spaces.

By that time, China had only three confirmed cases and had suffered no deaths. But officials there were taking no chances. The memory of the failure of their hesitant, inadequate, and non-public approach to Severe Acute Respiratory Syndrome (SARS) in 2003 was still fresh. So this time, they moved aggressively to screen those coming into the country, including Chinese students who had been studying abroad. Peiyu Li, a reporter for US-China Today, was one of these students.

At the end of a long flight, I was excited to arrive in Beijing Capital International Airport. I had spent the last several months in graduate school in the U.S. and was happy to come home to visit friends and family on my summer vacation.

At the airport, the atmosphere felt more tense than usual. Since SARS, we’ve always had to fill out a health declaration and walk through a thermal scanner upon arrival. But this time, the staff was all wearing masks, and paperwork was scrutinized more closely than I remembered.

I recalled at that time the cases of swine flu in China had all arrived from North America, and had seen a letter released by the Beijing Municipal Health Bureau and the Beijing Center for Disease Control and Prevention regarding students studying abroad, as I was. We were told to avoid public places for the first seven days we were back in China.

I nervously went through customs, and to my relief was cleared to go home with my parents. I stayed there for the first three days, and when everything seemed fine, I began to meet up with friends.

But on the fifth day, I developed a fever. My mother immediately came home from work and took me to the hospital.

When I told the nurses that I had recently come back to Beijing from the U.S., there was a flurry of masks, gowns and gloves. They immediately called a doctor. Meanwhile, they began a battery of tests while they grilled me on everything I had done in the past five days. I later found out that the lead doctors and hospital directors held an emergency meeting during their lunch hour to discuss my case.

Soon, the Center for Disease Control arrived in full contamination gear and continued the questioning. I felt like I had committed a crime. As I tried to recall every place I had been in the past few days from my still jet-lagged brain, I became even more anxious. I was terrified that my answers could lead to the quarantine of all my friends and relatives in the area as well.

All this was in accordance with the procedures officials put in place for potential flu victims. “The Chinese government has provided us with strict guidelines for when we receive patients with flu-like symptoms,” said a doctor (who asked not to be named) that I later spoke to at Beijing 307 hospital. “We have to inform the local and central CDC immediately, then we need to figure out the patient’s personal information, condition, flight and seat number and the contact information of all the people the patient has met since her arrival.”

After about two hours of questioning, an ambulance arrived to take me to Ditan Hospital, which had been designated and equipped for cases such as mine. My mother, who now also had to be quarantined, though she was showing no symptoms, sat with me on the edge of the hard benches in the ambulance as it sped toward Ditan. It was incredibly hot, though I’m still not sure whether I was feeling the fever, the anxiety, or the temperature of the vehicle. The ride took an hour; it felt like far longer. Reporters swarmed toward us as we arrived, crowding us as we tried to make our way to the entrance.

Fortunately for me, that was the worst of it. To our surprise, Ditan was quite nice and accommodating. The nurses brought us to a small, clean room with a TV and a private bathroom. They provided us with clean clothes and food. It really wasn’t that bad, except for the fact that we weren’t allowed to leave.

In fact, neither were the nurses. “All the nurses and doctors who take care of a patient [quarantined as a potential swine flu case] are temporarily isolated until the final result is negative for swine flu,” said the doctor at Beijing 307.

Two days later, our test results showed that my mother and I did not have swine flu. We were released from quarantine. We were fortunate to have a relatively easy time, but others have not been as lucky.

Because the virus first appeared in Mexico, the Chinese authorities quarantined dozens of Mexican visitors and cut flights to Mexico. In May, the Mexican government had to send a chartered plane to bring 136 Mexican nationals home after they had been put into isolation, event though many had not been to Mexico in months or exhibited no flu symptoms. Chinese authorities later apologized for not communicating with the Mexican government after international outrage that the Mexicans in China were unfairly treated.

The U.S. also warned potential visitors to China last month of seemingly random enforcement of quarantine rules after multiple reports of quarantined tourists from North America with elevated temperatures not even a full degree higher than normal, or in some cases, having merely sat near someone with mild symptoms on the flight over.

Many of these tourists are quarantined at their hotels if they don’t show symptoms, and are at the mercy of the hotel staff to provide meals and amenities, which by many accounts, are far worse than those I encountered at Ditan. Some have even blogged about their experiences, furthering the international attention to the issue. It is estimated that over 1800 Americans have been quarantined in China so far.

Authorities also strongly suggested that travelers impose a seven-day quarantine on themselves, though there are no statistics to verify how many visitors actually follow this suggestion.

News of these extreme measures has worried even those who haven’t been out of the country. “I got a cold recently, but didn’t dare go to the hospital to see a doctor because I worried that I might be quarantined,” said Chen Zhihua, a 24-year-old student at Renmin University. “I feel that the Chinese government is overreacting a bit due to the SARS problems. But I believe that China has made the right choice” in being overcautious rather than repeating a past mistake.

Chinese media has flooded the population with information on swine flu. “We can find the latest news about swine flu in the internet, TV, and in newspapers. The epidemic has become the focus of public concern,” said Duan Fengzhen, a middle-aged housewife in Beijing.

Now, infection rates and media coverage of swine flu are slowing. However, the World Health Organization is warning countries worldwide that it might not be over yet: “Countries should prepare to see cases, or the further spread of cases, in the near future,” said Dr. Margaret Chan, the Director-General of the WHO, in a statement in June. “Countries where outbreaks appear to have peaked should prepare for a second wave of infection.”

Given China’s massive population and the large number of travelers that cross its borders every day, it’s a wonder that only just over 2000 cases have been confirmed in China thus far out of the almost 94,512 cases worldwide. The one death reported thus far was the result of electrocution and not the flu itself. But even though the number is low and everyone has survived, the virus continues its spread around the world.

Peiyu Li is a Master’s student studying Communication Management at the University of Southern California.