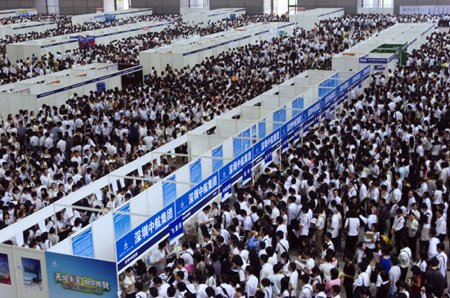 In a new series called Voices, US-China Today looks to listen in on the sentiments and expectations of common people from everyday life in various regions of China. This month’s series will be updated periodically, as we look to get a better understanding of the current economic crisis from various people, speaking from diverse geographical and occupational backgrounds. Listen in!

“Today is China’s College-Entrance Exam (in Chinese its called 高考). According to the local newspaper, the number of students who attended the exam in Qingdao was only 44,332; this is 4,600 less than last year. Also, the hotels near the exams are not as busy as before. In the past, most rooms of these hotels would be booked way in advance. But now, it’s changed. Some also say that the economic crisis makes it more difficult for college students to find jobs. So many high school students, especially students from poor families, change their minds about entering university. Instead, they just go search for jobs.” – Strong from Qingdao

“For me, I haven’t seen a big change in food, drink, clothing prices. It seems like most of these products have been relatively stable. Even the money in my pocket is about the same. However, I think that the biggest change is that this year, it is extremely hard to find a job. More and more people are now unemployed. Many students are either can’t find a job, or a faced with too low of a salary. This is my feeling toward the current situation.” – Henry from Beijing

“Although the current world economic situation is grave, it has not made a huge impact on me as an individual. Perhaps it’s because I don’t go out too often. However, from looking at the situation from my surroundings, I realized that although earning money is not easy, and factories are in a slump, supermarkets, clothing stores, restaurants, travel agencies, and many other consumer industries all are still vibrant in business. People’s attitude to the situation is still very positive.” – Aimee from Beijing

“China has more or less has been affected by the financial crisis. One obvious phenomenon is the decrease in consumption. People here are more concerned with emergencies, and are looking for lower prices with good quality. Business has also suffered. Companies have been trying hard to sell there stuff, cutting prices, and investing more in ads. Luckily, the government gave the business sector a boost with the proposed stimulus plan. Now it seems like our economic situation will slowly improve. I am not saying the crisis is over, but China is trying to solve the problem.” – Angela from Beijing

“The city of Beijing hasn’t stopped building more buildings after the Olympics Games. There is a street called “One-thousand-year-old Street” where the architecture closely resembles a typical street in China centuries ago. It seems like China is trying to preserve its traditional culture to attract more tourists. I also spent a few days in Shanghai and noticed that the city is under massive construction in preparation for next year’s World Expo. Shanghai, like Beijing a few years back, is quickly transforming into a more structured and sanitary city.” – Ngan-Ha from Hunan

“Thanks to the soaring economy in China, my parents gain more opportunities to deal with their farm produce, and can earn more and more money. Thus, I have the opportunity to further pursue studies in Qingdao University as a country girl, which before I thought would be impossible. Moreover, our government is focusing on the economy of China’s rural cities, so I am determined to contribute more to my hometown—Xiaoji, a remote village.” – Feifei from Qingdao

“The present economic situation has some effect on me, but the effect isn’t too big. In Beijing, I notice that daily food and clothing prices don’t have a big change. However, Beijing’s real estate prices have risen. Last year, everyone thought this year’s real estate prices would drop, but reality shows that that is not true. Also, I know finding a job this year is really difficult. Companies are forced to reduce their staff, and recent graduates can’t find jobs. People who still have their jobs are worried they will lose it.” – Faye from Beijing

“After carefully looking at the situation, the economy mainly has 2 large impacts on my life. The first impact is the rise in paper prices. As a student, it doesn’t matter whether it’s a textbook or another type of book, buying books is a large expense. In ’07 when prices began to increase in China, all sorts of paper products (especially newspapers) one after another became more expensive. Since the prices have increased, they will not fall as easily. The second impact is electronic appliances. As a student, I frequently use my cell phone, electronic dictionary, MP3, laptop, etc. The prices for these products have fallen, undeniably causing a huge demand for these products.” – Xinxin from Qingdao