China’s 60th: What the World is Saying

By US-China Today TeamOctober 6, 2009 No Comments

The People’s Republic of China is 60 years old. While the country is celebrating, what is the rest of the world thinking?

Beijing is on lockdown. The streets are blocked with police barricades. People are holed up in their houses. Tanks are running through Tiananmen.

But this is a party. The People’s Republic of China celebrated its 60th anniversary on October 1, and while Beijing stood still for the massive festivities that enveloped the city, national pride could not be higher.

“People here are genuinely proud of the achievements of their country,” says Barbara Demick, Los Angeles Times Beijing bureau chief. But, Demick adds, “To me, it doesn’t feel very celebratory. It feels like martial law.”

In the weeks leading up to the anniversary, Beijing was put on hold as rehearsals clogged the streets and over 18,000 marchers prepared for the big day.

“How, in the 21st century, can you shut down a capital city so thoroughly for a parade?” Demick says. “And will they bother to do it again in 10 years?”

Frank Ching, the Wall Street Journal’s first China bureau chief and a columnist for the South China Morning Post, commented on the sheer size of the event. “The 60th anniversary is the biggest since the one ten years ago, however this tradition of military parades is relatively recent,” Ching notes. “Before that, there were no celebrations for 24 years.” (Click Here to read a review of China’s National Day celebrations since 1949).

Security was an overwhelming concern for the local authorities. More than 850,000 volunteers worked to maintain civility across the city. Beijing residents were urged to stay home on the day of the parade as crowds swarmed around Tiananmen. Knives were removed from local supermarkets. Even the skies went kite-free to ease concerns of aerial sabotage. 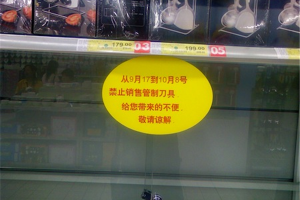 “From Sept 17 to Oct 8, it is prohibited to sell knives in stores. Please forgive us for the inconvenience.”

The spectacle of the National Day celebration could not have been grander.

“They have to show that they are still in charge, that the economic accomplishments of the last ten years are the work of the same Communist Party, that it is the same China,” adds Demick, highlighting the inward focus of the 60th celebrations.

One Beijing correspondent for a Middle East news agency, who spoke on condition of anonymity, compared the National Day celebrations to the Olympics just one year ago.

“It goes, to a certain extent, completely against the image they were trying to portray during the Olympics, which is one as a friendly world power, one which is integrated into the global stage, keying to be a force of peace,” the reporter said. “In many ways, it showed a party which was very antiquated, this concentration on a military parade, the obsessiveness about security…If we want to think in terms of a modern globally integrated China, that wasn’t the way to show it.”

The military might on display in Beijing is a striking sight. New missile systems rolled in front of the Gate of Heavenly Peace while thousands of soldiers marched in perfect unison.

“I think the Chinese domestic audience does like to see power, and the military,” Demick says. But, “It is perplexing because they are showing all this military hardware, but they don’t really have any huge external enemies. Despite rivalries with Taiwan, with the U.S. and Japan, relations are really quite good…so who is this aimed at? Who are they trying to scare?”

Ching sees a parade aimed at both audiences. “China is concerned about the impression that it makes both domestically and internationally,” Ching clarifies. However, “It wants attention to focus on Beijing and so has banned parades [and other 60th anniversary events] in other municipalities.”

A major difference between the two events, however, is the target audience. With recent trouble in China’s western frontier, the show of force may have been a signal of exactly who is in charge. Demick says that the recent violence in Xinjiang and riots in Tibet of last year put the government and citizenry on edge.

And while the outside world may have been an afterthought, there is still a lot of chatter abroad.

Some are in awe – Venezuelan President Hugo Chavez voiced admiration for China in an official letter  to President Hu Jintao. Others are worried – India’s The Hindustan  eyed the parade’s show of force with suspicion as “Hundreds of Warplanes and tanks rollout China’s 60th Anniversary.” For both admirers and critics, the central theme rests on Beijing’s immense military display and its implications for the rest of the world.