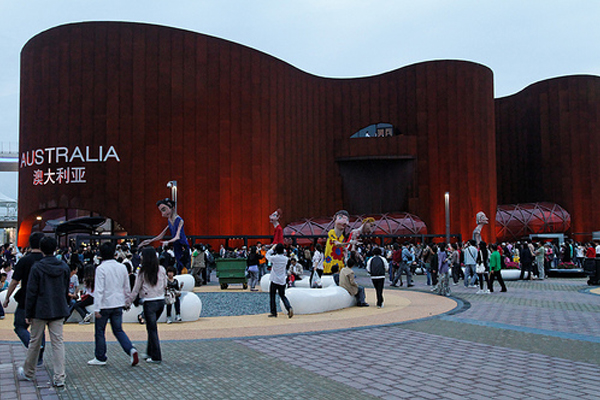 China and Australia: Ties That Bind

Chinese-Australian economic relations are fueled by China’s need for resources. Strategic cooperation may yield results, but interdependence is not always rosy.

Rudd’s Labor Party has just voted to replace him with his deputy Julia Gillard. Rudd’s problems were manifold and, it turned out, his mastery of Chinese did not permit him and Australia to avoid problems with China.

As it turns out, linguistic fluency can’t solve every problem.

“They expect him to deliver so much,” Nathan Backhouse says. As Director of Trade Policy and International Affairs at the Australian Chamber of Commerce and Industry (ACCI), Backhouse believes Rudd’s China experience may have raised Chinese expectations to an unrealistic level. “It is not always possible, even with a strong command of Mandarin.”

China-Australian relations have been rocked over the past year by disputes over corporate takeovers, film festivals, and scandal-tinged resource deals. At no point has the chief problem been understanding the words of the other side. Guanxi, or “connections” often facilitated by cultural and linguistic knowledge, is always important in China, but at the end of the day, it comes down to the goods.

And Australia has what China needs.

“The Chinese need what we have – resources,” Backhouse says. “Iron ore, liquid natural gas and base metals are needed to drive China’s industrialization.”

The Sino-Australian relationship is based on complementarities. Australia, rich in natural resources, provides China the fuel for its colossal manufacturing industry. China, looking to spread its mounting wealth through foreign investment, sends its money down under, including some US$40 billion in the last 18 months.

Fast-forward to the present, and according to the Australian Department of Foreign Affairs and Trade (DFAT), China is now Australia’s top trading partner in 2008-09 at 14.7% (US$83.0 billion) of total trade, followed by Japan at 13.4% (US$75.3 billion) and the United States at 9.4% (US$53.1 billion). In addition, Australia now imports the most from China.

The massive scale of Chinese investment protected Australia from the worst of the financial crisis, with the country recovering quicker than any other in the developed world. The DFAT found that despite the financial crisis, Australia’s total value of trade in goods and services increased 14.6% in 2008-09 to US$563.7 billion while exports increased 21.9% to US$284.7 billion.

Australia established diplomatic relations with China in 1972 under Prime Minister Gough Whitlam. Since then, the two countries have become members of many economic development groups, including the Asia-Pacific Economic Cooperation (APEC) and Pacific Economic Cooperation Council (PECC). For the last five years, Australian and Chinese negotiators have been working to hammer out a Free Trade Agreement (FTA).

Uranium, which is needed for nuclear power plants, is also plentiful in Australia. As China’s economic planners hope to quadruple nuclear-generated electricity output by 2020 (click here to see a US-China Today interactive map of China’s nuclear power resources and planned projects), the country will need uranium and planners hope it can be imported from Australia. Vital minerals such as iron and uranium are why Chinese leaders see the China-Australia relationship in strategic terms.

The Australian reported in November 2009, “The Asian giant made its biggest investment to date in Australian uranium, when state-owned nuclear giant China Guangdong Nuclear Power agreed to pay up to $100m for up to 73% of Perth-based junior Energy Metals.”

In addition to Australia, China is also looking to other countries to expand its natural resources.

“The Chinese government is trying to secure access to iron ore, oil, and also build a balance of power away from the U.S.,” explains Nicholas Thomas, associate professor in the Department of Asian and International Studies at the City University of Hong Kong. “Therefore, it is doing business with nations like Iran, Iraq, and Sudan that help it secure the natural resources it needs for long-term growth but also to create a block of power that is not reliant only on the U.S.”

China-Australia trade remains the most dominant, however. But while their trade relationship flourishes, uncertainties in the relationship remain.

“Domestic concerns are now growing over China’s intentions towards Australia,” adds Thomas. “On China’s side, there are indications that other aspects of the relationship are continuing to operate and grow; although Tianjin’s recent threat to revoke its sister-city agreement with Melbourne shows that no part of the relationship is immune from a downturn and that all aspects are political.”

Yap Chunwei, a reporter for Dow Jones, explains that China’s push into the continent is driving two parallel reactions among the Australian public.

“The focus of global attention is now on China’s push in resources acquisitions – iron ore, oil, and base metals. The implications for Australia is that it opens up a rich vein of financing for many of the areas it wants to see developed, including the Midwest region for iron ore,” Yap highlights. “But it also raises a degree of nationalism and a very legitimate question for them: how much Chinese control are we willing to cede on critical areas of industrial resources?”

Another issue is how Australian firms are struggling to penetrate the vast Chinese market as much as they would like. Firms in a variety of fields from the country-continent are seeking to join commodity exporters in entering China. However, China’s tendencies towards protectionism have made it difficult for firms from all foreign countries, not just Australia, to enter key industries in China.

Bruce Jacobs, a political scientist at Monash University, notes that, “Australia is especially strong in services such as banking and insurance, but the Chinese government restricts these firms tightly.”

In addition, some view the large-scale investments coming from China as a potential threat to Australia’s national security. In fact, a 2009 poll by the Sydney-based Lowy Institute for International Policy found that the attitudes of Australians to their biggest trading partner are cooling. 40% said that China’s emergence was a threat to their nation’s vital interests, up 15% since 2006, while half of the population believes there is too much Chinese investment in Australia. The rise of China makes many uncomfortable in Australia, as this poll illustrates. People are concerned, because they are afraid that China’s influence will grow out of proportion in the region.

An Australian Defense White Paper released in May 2009 argued for taking a cautious approach in dealing with China, and classified China as a potential security threat. Australia’s primary interests involve that no power in the Asia-Pacific region should be able to coerce or intimidate others in the region through employment of force. According to the report, “in Northeast Asia, China is likely to be able to continue to afford its foreshadowed core military modernization. Over the long term, this could affect the strategic reach and global postures of the major powers.”

Recent developments show that Australia and China are starting to make progress to cooperate and ensure better security standards. In late May 2010, a year following the publication of the White Paper, Visiting General Guo Boxiong, vice-chairman of China’s Central Military Commission, paid Australian Minister for Defense John Faulkner a visit. Together, they released a statement outlining that they sought to strengthen exchanges between their armed forces for the sake of peace and stability in the Asia-Pacific region.

However, other frictions in Chinese-Australian diplomatic relations, including the Rio Tinto arrest scandal and a protested visit of Rebiya Kadeer—a Uyghur rights activist now living in the U.S., cannot be pushed to the side.

Rio Tinto, a large Australian mining company, received attention when one of its Shanghai-based employees, Stern Hu—an Australian citizen of Chinese heritage—was arrested for charges of stealing national secrets. Rio Tinto decided not to accept the US$19.5 billion Chinese bid and subsequently Hu and others were arrested for illegal information gathering. Various Chinese steel executives were accused and put on trial for taking bribes to provide Rio Tinto with information.

In May 2010, the four Rio Tinto employees were convicted with sentences ranging from 7 to 14 years in prison. After the verdict was announced, they were subsequently fired by Rio Tinto.

Adding to the existing controversy was the shroud of secrecy covering the actual unfolding of the trial.

“In holding part of the trial in secret, China I believe has missed an opportunity to demonstrate to the world at large transparency that would be consistent with its emerging global role,” commented Australian Prime Minster Rudd to the Telegraph.

Another issue of concern has been Kadeer, who was virtually unknown in Australia until the Chinese named her as an instigator of unrest in Xinjiang. A documentary featuring an interview with her was scheduled for a film festival in Melbourne, where she had planned to attend. Chinese film officials demanded that she be excluded. When she wasn’t, Chinese film directors withdrew as participants. The result was greater publicity for Kadeer and her cause.

“As recent events regarding Stern Hu and Rebiya Kadeer amply demonstrate, China is prepared to flex its muscles when it doesn’t like the outcome,” Thomas adds. “In both instances, Australia has been limited in its ability to respond to Chinese actions.”

Regardless of this increasing concern over China’s growing influence, China-Australia relations continue to intensify. The interest both countries have in buying and selling shows that they are working hard to overcome challenges. It is estimated China will build 50,000 skyscrapers over the next 20 years, and it is this explosive growth that has largely fuelled Australia’s resources export boom.

History has shown that relations between different cultures are not always rosy. All of these incidents and other recent disputes over resource investments from China are visible signs that despite economic ties and mutual interests, China and Australia do not see eye to eye on many issues.

Chinese Vice Premier Li Keqiang, who many see as current Premier Wen Jiabao’s future replacement, warned that Australia should not stand in the way of Beijing’s investment ambitions. However, on a softer note, he also added that it was time for both sides to put aside their differences.

“We should enhance dialogue, mutual trust and reduce mistrust, properly handle our differences so as to ensure that our bilateral relationship is not deviated from the main track of growth because of a particular incident at a particular time,” Li said.

Australia’s economy and its people have historically been importers of capital. Its future growth relies on continued openness to foreign investment. The relationship it has with China involves more than trading minerals. Mandarin is the second most-spoken language on the continent. According to the Australian Department of Education, Chinese students account for 24% of international students in Australia. In addition, Australia’s imports from China are also on the rise.

In an October speech given by the Australian Minister for Foreign Affairs, Stephen Smith, he acknowledges: “Australia’s policies towards China will continue to be constructive, patient and forward-looking, informed by both our long-term strategic interests and a growing sense of confidence and optimism about this, the Asia-Pacific Century.”

As it seems, the two countries’ mutual interest will drive their bilateral trade onward, and their economic reliance will continue in the future. With progress being made on a FTA and for reasons of geography and economic opportunity, the two countries seem to be finding ways to work out their differences.

As recently as March 24th, 2010, Australia and China signed a multimillion dollar natural gas deal, even while the controversial Rio Tinto trial was still in progress. Clearly, this is a sign that the two countries wish to push forward through difficult political and situational tensions and a testament to the strength of their growing commercial ties.

Australian Trade Minister Simon Crean, in an interview with the Australian Broadcasting Corp., concisely summarized the state of Chinese-Australian relations: “China needs us, we need China.”

Andras Bodrog is an undergraduate student studying Marketing and Mandarin at Corvinus University of Budapest and Eotvos Lorand University. He previously studied at the University of Southern California’s Marshall School of Business.