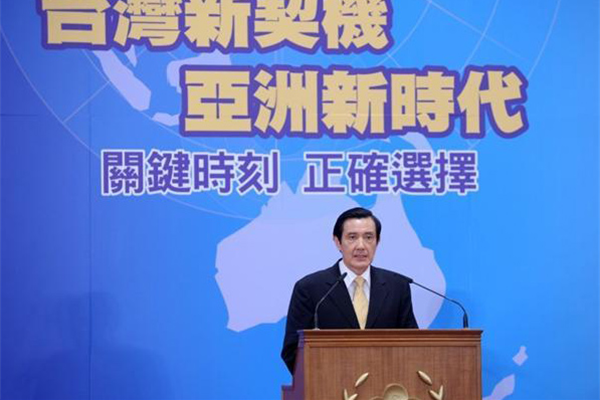 Plate: What are the risks, if any, that Taiwan takes with ECFA? Or are there no risks?

President Ma Ying-jeou 馬英九: 1. Negotiating the ECFA is an indispensable aspect of the ROC government’s overall strategy for strengthening Taiwan’s economy, forging ties in the Asia-Pacific and deploying globally in response to the trend of regional integration. In all we do, we strive to put our people’s interests first, maximize opportunities and minimize risks.

2. Though the ECFA removes barriers to Taiwan’s economic development and enables it to compete with other countries on a more level playing field, unless our products are outstanding and our businesses sufficiently competitive, we still will not excel in international competition. That is the real risk we face.
With this in mind, we’ve taken steps to uplift Taiwan’s enterprises to a higher plateau. For one thing, to strengthen our ability to attract foreign investment, we have established a task force for soliciting direct investment from abroad. This inter-ministerial group will target businesses worldwide and encourage Taiwanese enterprises operating in mainland China to invest in Taiwan.

As another example, to encourage businesses to innovate, in May of this year, our Legislature passed the Industrial Innovation Act, aimed at creating a healthy investment environment and providing us with effective new administrative tools.

We also hope to help our businesses boost their competitiveness by creating better products, developing markets and honing their entrepreneurial prowess. To that end, we will integrate government research and development resources; strengthen efforts to expand domestic and foreign markets; coordinate cross-strait supply chains; and assist businesses in developing new opportunities in the service sector.

Further, we will redouble efforts to sign free trade agreements (FTAs) or economic cooperation pacts with other trading partners. Taiwan’s development must not rely solely on mainland China, and the ECFA is only a first step toward global deployment.

3. Some people are concerned that the ECFA will create the risk of overreliance on mainland China and lead to cross-strait unification. In the course of the ECFA negotiations, however, we have put in place safety measures to reduce such risk. In particular, the text of the agreement contains no politically compromising content.

The agreement is designed to help cross-strait economic relations move forward in an orderly, gradual fashion, in accordance with World Trade Organization principles and in consideration of our respective economic conditions. It is similar to an FTA in nature, not a customs union or common market. Therefore, claims that it will cause Taiwan to be absorbed into a “one-China market” are unfounded. Most importantly, no one should doubt the [Republic of China] government’s resolve to safeguard our nation’s sovereignty and ensure our people’s economic security.

Plate: What would your government have to do to induce the PRC to begin redeployment of cross-strait missiles?

President Ma: 1. Mainland China has deployed over a thousand missiles against us. Because most of them are mobile, their redeployment has no substantive meaning. As tensions continue thawing across the Taiwan Strait, the mainland side’s expanding deployment of missiles is obviously incongruous. Still, if the mainland authorities were willing to redeploy them, we would appreciate it as a goodwill gesture meant to improve cross-strait relations.

2. It is beyond our ability to force mainland authorities to move their missiles. But through ongoing economic and cultural exchanges, we will keep working to advance cross-strait understanding and friendship and lead people on both sides of the Taiwan Strait to realize that only peace and good will can bring the prosperity and well-being we all seek. Then, the missile issue will resolve itself.

Plate: What would the PRC have to do to enable you to persuade your people that Taiwan needs to stop buying US arms and even consider serious arms reduction?

President Ma: 1. Since I came to office on May 20, 2008, I’ve done my utmost to promote peace across the Taiwan Strait and reduce the risk of armed conflict. Though cross-strait tensions have eased, after 21 years of continuous double-digit growth of the mainland’s defense budget, its military strength exceeds its defense needs, and its forces opposite Taiwan have continued to increase.

2. The scale of mainland China’s military power far exceeds ours, and we don’t have the ability to engage in an arms race. The arms we buy are purely defensive, so no matter what, we will continue to maintain the self-defense capability necessary to ensure our national security.

3. I’d like to stress here that the purpose of our arms purchases is to ensure our sustainable development. Maintaining an adequate defense force is an essential “investment in peace” that can also afford us more confidence in cross-strait talks. Besides, we need highly capable armed forces responsive to dangers posed by multifarious new types of unconventional warfare. So we won’t give up building the defensive power we realistically need in response to actions mainland China or others may take.

4. Cross-strait détente is no reason for our armed forces to relent in their mission to stay strong and protect the nation. They will remain vigilant and do what it takes to deal with any external threat and play a positive support role in the development of cross-strait relations.

Plate: How, if at all, does the evolution of the relationship between [the People’s Republic of China] and [the Hong Kong Special Administrative Region] impact on Taiwan’s thinking about the “final position” between Taipei and Beijing?

President Ma: 1. Since the handover of Hong Kong to mainland China in 1997, it has been a “special administrative region” under Beijing’s jurisdiction. Though Hong Kong’s Basic Law declares that it shall be governed by its people and enjoy a high degree of autonomy, the reality is that in Beijing’s “one country, two systems” model, the Hong Kong “system” must bow to the will of the “one country.” By contrast, the Republic of China (Taiwan) is a sovereign, democratic nation. So the mainland-Hong Kong model can’t apply to cross-strait relations.

2. In view of the impossibility of resolving the cross-strait sovereignty dispute in the near future, my administration’s pragmatic approach is to maintain the status quo of no unification, no independence and no use of force under the Republic of China’s Constitution while cultivating harmonious relations and promoting friendly interaction. Events have shown that this approach creates space for Taiwan to move forward, with improvements in cross-strait relations enhancing our opportunities for participation in international affairs.

3. Looking toward the future, surveys conducted by our Mainland Affairs Council show that an overwhelming majority of people in Taiwan are in favor of maintaining the status quo. As Taiwan is a democratic society based on respect for the public will, in the realm of cross-strait relations, this government will continue to abide by the principle of putting the interests of our 23 million people first and respecting their freedom of choice.

Plate: In developing your cross-strait relations, what do you think you (as President) have done especially well; and where have you, in your own opinion and self-criticism, done less well or could have done better?

President Ma: 1. Immediately after assuming office, I pushed to restart the institutionalized cross-strait talks that had been suspended for nearly a decade. This effort has eased tensions that had built up over the years. During the past two-plus years, Taiwan’s and mainland China’s negotiating teams have conducted five rounds of high-level negotiations that have produced 14 agreements. Step by step, we’ve resolved all sorts of problems that have arisen in the course of cross-strait interactions. In particular, the Economic Cooperation Framework Agreement (ECFA), signed at the end of June, is an essential foundation for orderly development of cross-strait economic and trade relations that will bolster Taiwan’s prospects for achieving a “golden decade” of economic development.

I believe that this systematized dialogue, the development of healthy cross-strait relations, and the advancement of regional peace and stability are the most meaningful accomplishments of my administration. And opinion polls seem to agree, indicating that public satisfaction with our performance is greatest with respect to cross-strait relations.

2. Undeniably, various opposition politicians and social groups are critical of the direction and pace of development in cross-strait relations. We must focus on reaching society-wide consensus on these issues. We will actively solicit the views of people on issues of common concern and listen thoughtfully to what they say. And we will strengthen liaisons with the Legislature, the media and people from all walks of life in order to understand their views.

Plate: Do you think it will ever dawn on members of the opposition party that true, complete and formal independence from the mainland is a very slim likelihood indeed, at least for the foreseeable future?

President Ma: 1.  The Republic of China has been a sovereign, independent nation since its establishment in 1912, and next year will mark its centennial. It therefore does not need to pursue independence. In fact, there is no nation in the world which declares independence twice. This is the practical reality across the Taiwan Strait as well as the common understanding of the great majority of people in Taiwan, including the opposition.

2.  As to possibilities for future development of the Taiwan-mainland China relationship and for defining our statuses relative to each other, at the moment, there appears to be no way of resolving the matter that both sides can accept. Nor has our society reached a consensus about this. Regardless of how things develop, however, Taiwan’s future will not be determined by any particular political party, but collectively, by the 23 million people of Taiwan. This constitutes the strongest consensus now uniting our ruling and opposition parties.

Tom Plate’s most recent book is Conversations with Lee Kuan Yew, first in his “Giants of Asia” series. Plate is distinguished scholar of Asian and Pacific Affairs at Loyola Marymount University. His “Pacific Perspectives” column appears in newspapers in North America and Asia.