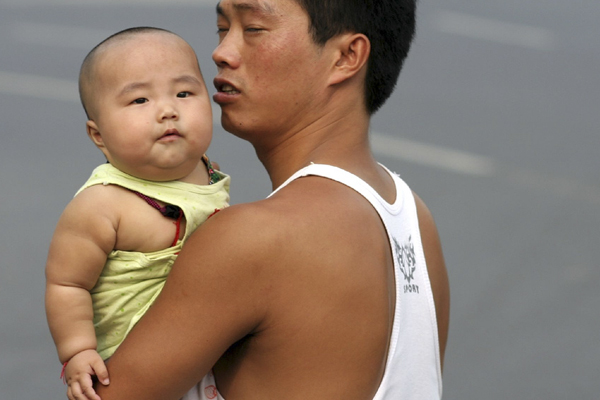 Obesity in China: Waistlines are Expanding Twice as Fast as GDP

China is experiencing a record high obesity rate, which means millions are becoming obese each year.

In the U.S, we’re used to hearing about our massive weight crisis – with more than 74 percent of adults age 15 and older classified as overweight, the American culture and media landscape have become fixated on finding new diets, procedures, and lifestyle changes to address the dilemma.

But what is rapidly becoming apparent is that we are not the only country coping with our expanding waistlines. In China, the prevalence of being overweight is actually dramatically outpacing the growth of its GDP.

According to the World Bank, China’s US $4.99 trillion GDP in 2009 was a remarkable 181 percent increase from its 2005 GDP (US $2.75 trillion). The number of obese people in China is growing even faster. There are nearly 100 million obese people in China today, more than five times the number in 2005, when 18 millionwere obese.

The definition of being overweight is having a body mass index of 25 or greater. According to the World Health Organization’s Global Info Database, for those ages 15 and older, 45 percent of males in China and 32 percent of females were overweight, or an average of 38.5 percent of the 2010 population.  This is a sharp increase from the 2002 statistic of 25 percent.

With an overweight percentage of 38 percent and rising, mainland China is home to a staggering 380 million-plus people with weight problems. And studies show that the problem is becoming increasingly prevalent among youth, and may largely define urban China’s near-term future.

Robert Girandola, a professor of kinesiology at the University of Southern California, conducted a 2006 study, titled “Prevalence of Obesity and Body Composition in Hong Kong Children,” researching the body fat percentage of 3,000 nine-year-olds. He found that the average body fat of these children was 21 percent, an alarmingly high number.

“These are pre-pubertal [children], and pre-pubertal you should not see numbers like that,” says Girandola. He also added that the problem will only grow worse as these children start to develop symptoms of the chronic diseases associated with obesity, including diabetes and high blood pressure.

In addition to diabetes and high blood pressure, other serious health implications related to obesity include a higher risk of cancer, heart disease and diabetes. The latter disease is rapidly becoming more prominent in China. A March 2010 New England Journal of Medicine study estimated that 9.7 percent of the country’s population has diabetes, a figure that is close to that of the U.S. at 11 percent; another American Diabetes Association study found similar rates in both countries. Also notable is that of these diabetes cases in China, 60.7 percent went undiagnosed. The majority of these cases are Type II late onset diabetes, which is directly correlated with being overweight; obesity has been found to contribute to approximately 55 percent of Type II diabetes cases.

Paul French, co-author of the recent book Fat China, which chronicles the growing problem of obesity in China, claims that the actual diabetes rate may be as high as 16 percent, with 150 million additional people categorized as pre-diabetic, putting them at a high risk for developing Type II diabetes.

“There are people in China who say with acupuncture and traditional medicine you can cure diabetes, but there is no proof of that either,” says French. “Diabetes is something that once you’ve got it, you’ve got it and you have to manage it the rest of your life.”

According to a 1992 China National Nutrition Survey, the percentage of men and women classified as overweight, or with a BMI greater than 24, was 17.4 percent. The government agenda at that time was to gauge the prevalence of underweight individuals, but what they found at the other end of the spectrum ended up being a surprising trend that has continued ever since. The same survey conducted 10 years later in 2002 showed that 29 percent of individuals were overweight, a 66.7 percent increase.

Contrary to the U.S. where obesity is concentrated more heavily among poorer people, China’s obesity problem is largely defined by what French terms a “wealth-deficit” problem. Specifically, the richer you get, the fatter you are. In rural China, the prevalence of being overweight and having diabetes is naturally lower. However, in the cities, a larger number of people own cars and televisions. Not only are these luxuries symbols of wealth, but they also greatly decrease physical activity, resulting in higher rates of obesity and diabetes in urban areas. What is causing the Chinese population to grow overweight at such an alarming rate?

Athena Foong, an epidemiology researcher at the University of Southern California’s Institute for Global Health explains, “It’s a very communal thing in Asia, if you see someone having that, you want to have that too; so if they’re telling you that, we just enjoyed a super duper meal at McDonald’s and that becomes a fanciful thing to do, you want to do it too.”

But what about physical activity and sports in China? Peaking during the 2008 Beijing Olympics, China has been making large strides on the international sports front. However, among the general population, this is not necessarily the case.

As French says, “With the Olympics in China, rather than encouraging more people to take part in sport, it basically sent out the message that sport was an elite activity, and if you play sports, you better win gold medals; the idea of just a bunch of kids running around playing games was considered a waste of time.”

Foong also adds that this de-emphasis on sports and physical activity starts from childhood, and carries on to later life. “The only way people look at the way you advance in life is getting a better education so you can get a better job, and sports is not considered a job.” Parents may dote on their only children, but they also hold them to high academic standards in order to achieve a better life.

“It’s not that they want to force their kids into going to school, and then doing these extra school classes, and on the weekends having a tutor,” explains Foong. “It’s just the pressure to do so much into that direction and away from play, from physical activity, from all that.”

This emphasis on schoolwork at the expense of play and organized sports parallels the rise in obesity in China. Foong adds that it is not merely as simple as telling parents, “You guys can just stop worrying too much about getting good grades because that’s the path that everyone’s already on; that train has already left the station.”

Two or three generations ago, China suffered a nutrition challenge. Many people suffered malnutrition, went hungry and were underweight. Fast-forward to the present and conditions are swiftly becoming the opposite. In China’s larger cities, where roads were once exclusively filled with bikes, cars pack the streets 24 hours a day.

And in addition to having more cars, city streets are also now lined with fast food restaurants, the ubiquity of which is one cause of obesity in China.  It is easy to find a local McDonald’s, Pizza Hut or Starbucks ready to serve up fast food to the masses. In fact, Yum Brands, the parent company of fast food leaders such as McDonald’s, Pizza Hut and KFC, opened more than 500 restaurants in China in 2009, and expects to one day have more than 20,000 restaurants there.

Alongside China’s meteoric economic rise and fast food market growth in the last two decades, the lifestyle of the Chinese people has changed dramatically. For example, aside from a greater array of food options, the Chinese are indulging their children because state policy has shrunk family sizes while economic progress has given urban families higher disposable incomes. Families and their children have become less active.

These various changes have led to an equally fast climb in modern health problems. Obesity is a plague facing the developed world that leads to other complications such as diabetes and hypertension, which place an enormous pressure on the healthcare system. And in China, much like the rest of the world, the problem is only growing.

What are ordinary Chinese doing to solve the problem of growing waistlines? Put simply, not much. Or at least not much that seems to be working.

Says French, “The three things that people are doing at the moment, none of these things are particularly sensible.” Those three main things are unreasonable fat camps, which provide limited results for children using contrived and sometimes dangerous methods, unregulated and ineffective slimming pills that eliminate mainly body water, and cosmetic surgery – which treats the symptoms but not the problem.

Solving the problem is not merely a matter of execution and practicality, but also a cultural and social one as well.

One change that must take place is that people need to find ways to eat more healthily, especially since it is difficult to exercise enough to work off certain foods. However, this is a lot easier said than done when the Chinese affinity for Western fast food brands is increasing, and on the flip side, Western companies are increasingly eager to tap into the Chinese market.

Taking on a more active lifestyle is another important measure to help mitigate the problem.

“The solution is very simple,” says Girandola. “People have to be more active. Is that going to happen? I doubt it. People are not going to go back to bicycles again, not when they basically have a car.”

So what can one expect from China in the near future? There are many possible solutions, but when the public cares more about eating tasty and convenient food, climbing the socioeconomic ladder and relishing newfound wealth, nothing will come easily.

Fast food is also not going to disappear. One example of this is a new trend that has emerged in Hong Kong, dubbed “McWeddings,” wherein local McDonald’s restaurants provide wedding reception services to young couples.

Over the long term, in is also necessary to make school curriculum changes in schools to promote healthy habits. The key largely lies in children, who may be more able to pick up and maintain healthy habits than adults.

“Once you get overweight, it’s very hard to suddenly turn it around,” explains Girandola. “That’s why you got to solve it beforehand; people have to be proactive rather than reactive.”

As China rapidly modernizes, it will inevitably encounter the problems that first-world countries face. Unfortunately, the arduous path to relieving China’s overweight problem and ensuing health issues will not be nearly as smooth as the road that got it there.

Sky Patterson is a senior at the University of Southern California majoring in East Asian Languages and Cultures.