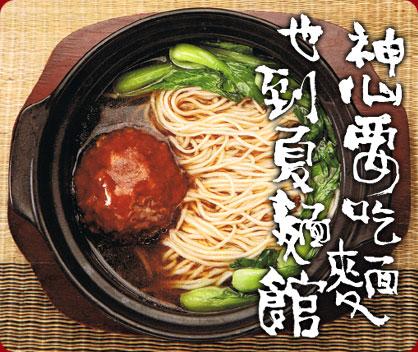 Mainland Chinese companies looking to go international are increasingly expanding to Hong Kong, using it as a testing ground before entering the global market.

Xia Noodle is a traditional Shanghai restaurant chain which in 2007 chose Hong Kong as its first destination to set up a branch outside China. It now operates six chain stores in Hong Kong, more than in Shanghai, and has plans to expand beyond the former British colony.

“We recruited dim sum masters from Shanghai to maintain the local flavor,” said Derek Liu, the company’s CEO, “Meanwhile we have reshaped this very local noodle restaurant into one with a more international image.”

“If you only want to make money from a local market, obviously, you won’t choose a small market with populations of 7 million,” said Liu.

As increasing numbers of Chinese businesses are looking to go international, there is a trend of many businesses launching this process by expanding beyond the mainland market to Hong Kong. As an official region of the People’s Republic of China, yet one that is still a very international market with a cultural melting pot of various international influences, Hong Kong is the ideal place for companies to make their debut on the international stage.

This growing trend of businesses expanding to Hong Kong may in part be influenced by the latest five-year plan.

The five-year plans are a series of economic development initiatives laid out by the Chinese government every five years with different guidelines set for five-year stages. The plans began in 1953 and are currently in their 12th stage. The 12th Five Year Plan for 2011-2015 focuses on emphasizing Hong Kong’s role as a center of international finance, accelerating the process of opening up and welcoming foreign investment.

In fact, according to a recent analytical report issued by the Bank of China (Hong Kong), “Mainland enterprises are currently moving to a new stage of ‘going out’ in the 12th five-year plan.”

The most urgent requirement for Chinese businesses is sophisticated international service. This is Hong Kong’s unique strength, including high-quality financial service, commercial supporting services, information and talent, and professional services.

In addition, political risk has been the biggest concern of mainland companies considering oversea investment. But Hong Kong is the ideal destination because of less political impact.

Moves by Chinese companies to take advantage of what Hong Kong offers to help their efforts to “go international” can be seen in many industries.

In the financial world, the Hong Kong Stock Exchange main board has became the top choice for mainland companies listing in foreign markets. The amount of mainland companies doing IPOs in Hong Kong jumped to 82 in 2010, almost four times the number from 2008, according to a recent report from China Venture.

Another sign of China’s increased reliance on Hong Kong comes from InvestHK, the government department that promotes foreign direct investment in the territory. In 2010 InvestHK attracted 284 investment projects, 18 percent of which were from mainland China. In the previous decade, the percentage from China was 15 percent.

“One mission that our team carried is to embrace the new trend, where Chinese companies are going out, instead of only introducing foreign investment, which was the case seven or eight years ago,” said Loretta Lee, InvestHK’s head of China Business.

The China business team at InvestHK was set up in 2000 in a response to the growing investment need from Mainland China. The group assists inexperienced mainland companies, teaching them how to operate in the complex Hong Kong environment.

Figures from the Chinese Ministry of Commerce show that in 2010, the total domestic outward investment (non-financial sector) in 129 countries or areas reached a record 59 billion USD, equal to the total amount of the period from 2002 to 2007.

“The mounting expansion reflects robust growth of the Chinese economy and its rising demand of international resources and technology,” the Bank of China (Hong Kong) report noted.

Hong Kong has become an increasingly attractive destination because of its long-standing reputation as an international business center.

“A mainland company comes to Hong Kong either for raising money or going international later,” said Liu, “Hong Kong is a half-international market. If you can survive in this market after re-branding, then you can go international directly.”

In addition, according to a 2009 survey by the government’s Census and Statistics Department, a simple and low tax system is key in “factors affecting location choice for regional head quarters in Hong Kong”.

Given the dramatic economic growth in the region in recent years, Hong Kong, as the leading investment center in the Asia Pacific, has become increasingly important for mainland companies.

With all indications showing Hong Kong will likely play an even more important role in China’s move to “go international,” the Hong Kong government has intensified efforts building connections with mainland companies.

In 2003, the mainland and Hong Kong Closer Economic Partnership Arrangement (CEPA) was signed to facilitate business between Hong Kong and China and enhance economic integration and co-operation.

Meanwhile, InvestHK is active in promoting the city in the mainland, with its efforts ranging from nearby cities like Guangzhou to Shenyang in northeastern Liaoning Provinces.

Various promotion activities, such as trade fairs and visiting tours, have been carried out to attract Chinese companies with Hong Kong’s free market and pro-business environment.

“What the Hong Kong government provides is not tax credit or other privileges for foreign investors; we believe an excellent investment environment is the best we can offer,” said InvestHK’s Lee.

Foreigners who do business in Hong Kong also feel the difference.

“This is not only an opportunity for mainland companies and Hong Kong, but also for foreign companies, who have great service and a good brand,” said APCO’S Michelson.

The American Chamber of Commerce in Hong Kong (AmCham) is also trying to capitalize on the new trend. On its website, AmCham highlights a new China Affairs Department “dedicated to reinforce Hong Kong as a ‘gateway into China’ and also a ‘gateway out of China’, assisting member companies to interface effectively with Chinese companies that are trying to go international.”

In 2010, the department organized 15 activities and delegations in Mainland China, Hong Kong and Macau, helping US professional service providers to interface with and provide general “know-how” to Chinese companies planning to go global.

With the help of high quality professional services provided by the global talent in Hong Kong, those mainland companies are able to improve their internal functions, management structures and corporate governance.

Moreover, the label “made in Hong Kong” is likely to be widely accepted internationally with its high reputation.

For instance, Beijing Tong Ren Tang, a Chinese pharmaceutical company producing traditional Chinese medicine, has set up a research and development centre at the Hong Kong Science and Technology Parks in 2006.  The move enabled the company to make new Chinese medicine products that comply with international standards, enhancing its competitive edge in the global market.

But the Hong Kong brand is more than the production location. Liu of Xia Noodle attributed his company’s international success to its sophisticated and modern management and operation system.

“[In Hong Kong,] we have plenty experience and talent in management, branding, logistic and quality control. It is quite vital for those enterprisers who want to run a larger business,” he said.

The new trend appears to be a win-win situation. Companies in Hong Kong are developing contacts with mainland businesses, as well as finding more opportunities to make profits by cooperating with mainland partners.

Hong Kong’s role now is much like an exchange counter – a two-way channel for both foreigners and Chinese who want to use it as a stepping stone to pursue more profit. As the Bank of China (Hong Kong) report noted, it is a good opportunity for Hong Kong to exploit and enhance its role as a resource to Chinese companies going international.

“It depends on each company’s strategy to see whether they will go further or stop in Hong Kong,” said Lee. “However, Hong Kong’s role is there, as a platform for Chinese businessman to embrace the world and explore the new territory.”

As a smiling and confident Liu noted, “In April, we are going to open a new branch in Macau in 2011, and the development in Singapore and Japan are coming soon.”

Echo Guo, Shadow Li and Summer Qin are students in the Journalism Program at the Chinese University of Hong Kong.