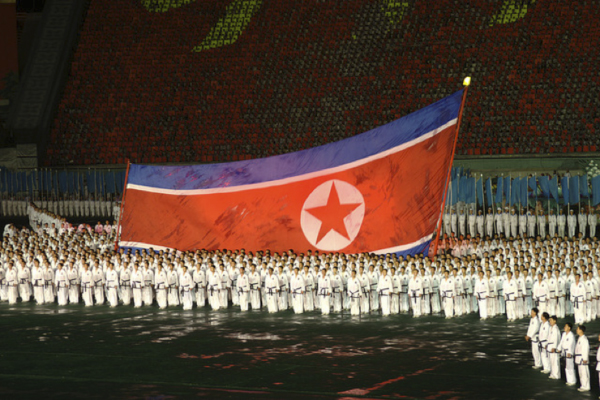 North Korea Quiet in the Wake of This Year’s Uprisings

Seated in one of the world’s major corridors of trade and power, North Korea borders–by either land or sea–the world’s second, third and fifteenth largest economies–China, Japan and South Korea.  The wealth and prosperity of its neighbors partly serves to underscore the anomaly of North Korea: from the skies above, South Korea, Japan and the northeast of China glimmer with bright light, but North Korea appears as dark as the ocean save for a few isolated tiny specks.

With a nominal GDP per head of about $1,900, North Koreans live under some of the harshest conditions in the world. According to the Wall Street Journal, North Korea seems to be in the midst of its worst food crisis since the late 1990s famine, a crisis exacerbated by the free-market crackdowns the ruling regime implemented in 2010.

“Should the South Korean puppet group dare intrude into the territorial waters of the DPRK even 0.001 mm,” declared North Korea’s official news agency, “the revolutionary armed forces of the DPRK will unhesitatingly continue taking merciless military counter-actions against it.”

Such fiery North Korean rhetoric may seem lifted from the pages of a Cold War narrative. The modern border between North and South Korea is a war zone, as a formal end to the Korean War has never been negotiated; the present 38th parallel is a result of an armistice truce in 1953. However, this statement was uttered just hours after North Korea shelled its southern neighbor’s Yeonpyeong Island last November, in an attack UN Secretary-General Ban Ki-moon deemed “one of the gravest incidents since the end of the Korean War.”

Despite widespread reports of Chinese anger at the destabilizing behavior of the North Korean regime, China has yet to throw its impoverished neighbor under the proverbial bus. There are two reasons for this unbroken support, according to University of Southern California Professor David Kang, director of the university’s Korean Studies Institute.  One is China’s fear of losing influence on the peninsula to South Korea, and therefore the U.S., and the second is far more frightful–a doomsday scenario of collapse in which millions of North Korean refugees flood across the border while Chinese, Korean and American forces race to secure North Korea’s nuclear arsenal.

“China is pushing gradualist reform over the border, and each time Kim goes to China they try to convince him to reform,” says Kang. But so far, Kim and his regime have rebuffed such ideas, says Kang.

Amidst isolated calls for a Jasmine revolution across China, and Beijing’s detention–and recent release–of longtime political dissident Ai Weiwei, nothing of the sort has happened in China’s neighboring state.  Scott Snyder, director of the Asia Foundation’s Center for U.S.-Korea Policy, does not believe North Korea is susceptible to uprisings like the revolutions that have swept across North Africa and the Middle East.

“I believe that the conditions are not yet ripe for public expression of political discontent in North Korea.  Therefore, I do believe that the response from the regime would be as brutal as the Libyan response, if not more so,” said Snyder.

Snyder believes that Pyongyang exerts far more control on its residents than do the governments of Middle East nations. 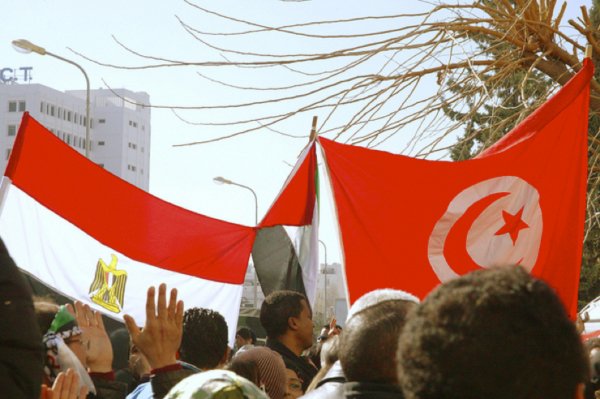 Snyder doesn’t believe the type of uprisings that spread across parts of North Africa and the Middle East can happen in North Korea at the moment.  Photo courtesy of Wassim Ben Rhouma (Creative Commons).

The Kim family-based regime in North Korea may no longer retain the absolute influence and power it once boasted. According to the Korea Joongang Daily, Kim Jong-il has taken extra legislative measures to ensure that the military does not hamper a smooth succession, making “all military activities of the Korean People’s Army…executed under the leadership of the Workers’ Party.”

“There’s a whole range of possibilities for instability short of what might be required in order to justify international intervention or a gradual process of further decline. Basically what most countries are going to respond to is really spillover,” says Snyder.

Any political vacuum created as a result of power struggle within the regime could have detrimental consequences, with the possibility of a civil conflict erupting. “The initial response, I think by all parties, is going to be cautious, it’s going to be reactive and it’s going to be focused on a collection of intelligence about the situation in North Korea in order to understand its dimensions as clearly as possible. It’s only on that basis that you can make a decision about how to respond,” Snyder says.

In the case of a political vacuum resulting from power struggle, Snyder argues the future of North Korea would largely rest on the shoulders of China and South Korea. While both nations would face a throng of challenges along their borders, momentary North Korean instability might be an opportunity for either nation to push its own agendas.

China would seek to ensure lasting border stability by denuclearizing the peninsula, and the scenario would play out along the lines of a “denuclearized arms race,” with both the U.S. and China competing to secure the nuclear material that may very well establish the main contender in the conflict-stricken region.

South Korea may see this as an opportunity to pursue its constitutional right of reunification. One of the major obstacles it would have to face is gaining China’s consent, as it would be unwilling to invite such a U.S.-dominant influence so close to its border.

“The U.S. view is that it should be something that the U.S. would be likely to take the lead on. The Chinese may view it differently. It really depends on who gets there first, who is able to secure the nuclear materials that are not under anyone’s control in the event of a collapse of the North Korea system,” says Snyder.

The key international players are likely discussing contingency plans in response to a volatile North Korea.

“You have planning going on in the U.S. and South Korea and a separate planning process going on in China, but no way of coordinating an advance to ensure that those plans don’t conflict with each other. It’s certainly desirable for all three countries to begin having a discussion in order to understand the impact and implications of North Korea instability because that can be a way of communicating parameters and expectations,” Snyder contends.

“Ultimately, I think it’s going to be hard for China to block unification if that situation develops. But I do believe that China would probably try to insist on certain conditions as a prerequisite for allowing the process to go forward,” argues Snyder.

Reform is “possible in theory,” says Kang, “but it certainly doesn’t appear that way, and there’s really no way of knowing, given the regime’s complete lack of transparency.”

Chinese exhortations to reform aside, there is little to suggest North Korean leaders have any incentive to do so. As a regime that contends it provides a quality of life far beyond that of South Korea, reform may be the beginning of the end for its leadership. As a result, says Kang, North Korea’s economic policies are largely incoherent.

“I think North Korea is trying to have it both ways,” he says. “Their drastic currency revaluation in 2009 was meant to hurt the entrepreneur, but on the other hand, the North Korean Development Bank I believe is aimed at getting Chinese companies into the country.”

University of Southern California Professor Daniel Lynch says if North Korean leadership did brave the risks to its grip on power and enact reform, prosperity and stability–not ideology–would be paramount to China and the international community.

“Among the range of plausible reform models,” says Lynch, “neither the U.S. nor China would be very concerned about which one is implemented as long as denuclearization takes place and it pursued an economic program that improved the prosperity of its people in an equitable way.”

As for plausible reform models, Kang says the Chinese model of development might not be the most appropriate for North Korea, despite its persistent dependence on China for economic and diplomatic support.

“I believe the China model is less likely to be a model, just because the situation with China is so different,” says Kang. “China is just so much bigger. The North Koreans might look to South Korea, and they might see Park Chung-hee as the best model. At the time in the ‘60s, Park was repressive and ruthless about keeping political power, but he’s credited with an economic miracle. I wouldn’t be surprised if they try to take a page from Park Chung-hee’s rulebook.”

The Future for North Korea

Despite ongoing tensions on the Korean Peninsula centered upon the demonstrated mercurial nature of the North Korean regime and the possibility for either its collapse or reform, there is reason to believe that the North Korean situation may remain intractable for years to come.

Kang says there is little incentive for any of the area governments to push too hard for meaningful change.

“Within the general framework of contingencies, in many ways we’ve moved back to the new Cold War,” says Kang. “It’s the same way it was in the 1950s. The U.S. and South Korea are very close, and China grudgingly supports North Korea. Everybody knows how to play this game and it satisfies lots of domestic political concerns in every single country.”

“Right now we seem a little bereft of ideas about how to solve the problem,” Kang says. “We’ve fallen back to exactly what we’ve been doing for the last 60 years. No one is really willing to push hard on it.”

Christopher Alesevich is a graduate of the University of Southern California. Paul Kim is a recent graduate of Cerritos High School.