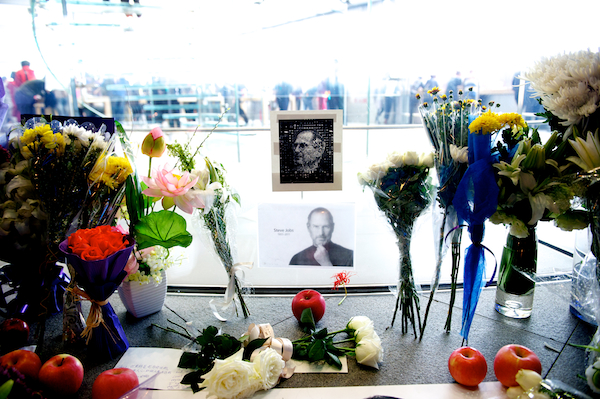 With the passing of Apple founder Steve Jobs, Chinese internet users have taken to social networking sites like Weibo and Renren en masse to express their feelings for the tech visionary. According to Sina, Jobs’ passing generated the largest amount of traffic in Weibo’s history, with over 35% of total users posting unique messages about the former Apple chief in the day following his death. A Weibo tribute page to Jobs had nearly 75 million messages by midnight on October 7th. Below is a collection of Weibo posts and pictures from October 6-7, 2011.

I have never used any Apple products, but I admire Jobs’ talent. I hope that one day I can match his monumental work. Steve Jobs forever. –搁浅的小星星 High school student, Wuhan, Hubei

I have to say something about Jobs’ passing. Although I do not like that Apple is sealed off [develops products privately], I was always impressed by its perfection. He is gone, and so is his spirit of “If I can’t do it, who can?” In the future, will Apple be the same innovative company that has led us in the past ten years? Jobs, take care, I will miss you. –吴誉槐 Beijing

Everyone is an apple missing a bite, whether we are lacking beauty or a bit of luck. The brilliant Steve Jobs was also missing something – his health. The only thing that cannot be missing is the core: the spirit of innovation and motivation. As long as the core has not rotted away, why bother missing a bite? –张泉灵 CCTV News Anchor, Beijing

At this moment, I am sick of some people’s reaction over Jobs’ death. Jobs died, you eat a bite of an apple and throw it away; when Bill Gates dies, will you smash windows and throw it on the ground? Only because everyone uses Windows, but Apple is out of reach for many people? I am deeply impressed by the changes brought by Apple, but I still have to admit some Chinese people’s XX [twisted] psychology. –逐鹿先生 Beijing

America has CEOs like Steve Jobs, officials like Gary Locke, rich men like Bill Gates and Warren Buffet, strong corporations like Microsoft, Apple, Intel, Oracle, Coca-Cola, IBM and Wal-Mart. America has at least 70% of the core technology in today’s world (0 for China), which is the source for a powerful America. I don’t want to talk about other advantages; China falls far behind in this one aspect. Chinese people should improve! –zys-阿升 Heyuan, Guangdong

Right after the iPhone 4s announcement, King Jobs passed away. He had no regret because he left the world as a legend that will be imitated but never surpassed. Rest in peace, though, I have not become an Apple fan yet. –陈近南007 Shantou, Guangdong

I feel curious when I see “Sent from from Steve Jobs’s iPhone.”. Why have I never seen “Thomas Edison’s invention” on a light bulb? Have never seen “Microsoft from Bill Gates”? Never even seen Lumiere Brothers’ name on movies! Is it true that we only cherish a successful invention when it makes a lot of money? The change brought by an iPhone is equivalent to the change brought brought by lights and movies? I doubt it! –骑行的砖头 Changchun, Jilin [regular posts to Weibo feature a note that says “Sent from iPhone. On Oct 6th, Sina Weibo modified the note to say “Sent from Steve Jobs’ iPhone]

It has been a day since we lost Jobs. On the internet, people from different countries with different skin colors are expressing grief and praise endlessly. People respect this visionary genius! However, if every industry had a Steve Jobs, and we are tempted by new products when we are still getting used to the old ones, when frequent [product] updating is driven by profits and when the Earth is filled with garbage, will it be a better world? –小亨空间 CEO, Beijing

Jobs spent his life creating fun products, but we spend our lives playing with these products. We buy Jobs, buy his achievements, but do not practice his ideals. –我慢慢呼吸 Shenyang, Liaoning

Jobs, I can’t afford to buy your Apple products. I hate you for making Apple a symbol of the rich. There will be more people missing you if you make it more affordable. –喻亮V Wuhan, Hubei

There are thousands of microblogs mourning Jobs’ death. The number leaves me shocked. Companies never lack a corporate culture but very few possess a [truly] industrious culture. Many Apple fans may not have known who he was a few days ago, but now also drift along [mourn] with others. I think they are showing their faith in Apple’s beliefs, or are recognizing Apple’s culture and Jobs as the respected hero behind it. –CNR李圣 Beijing

Why do so many people mourn Jobs now that he is gone? They are just following the trend! Did you know this person when he was alive? –Ana_JJ Daqing, Heilongjiang. 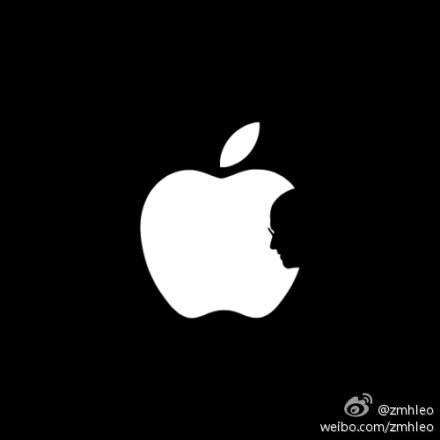 Designed by 19-year-old Jonathan Mak, a student at the Hong Kong Polytechnic University School of Design.