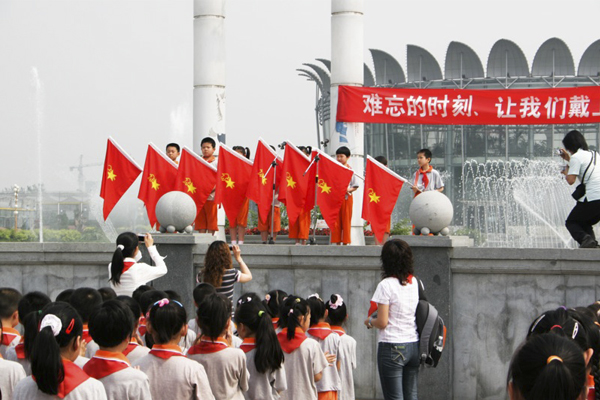 Joining the Party: Youth Recruitment in the Chinese Communist Party

For Chen Zhu, there was never any question that she would join the Party.

“I grew up with people who cared about what went on in the world,” Zhu says. “To be a member is to take responsibility for the country.”

A native of Liaoning, Zhu joined the Chinese Communist Party (CCP) — China’s ruling political party — largely because of her family’s involvement. Both of her parents and her grandfather are Party members. Her decision to join was simply a desire to follow in their footsteps.

“I wanted to honor them,” Zhu says.

Since then, Zhu has worked to recruit others to join the CCP’s ranks. While her tale is not unlike that of many other young people in China, it is only a small part of the story. In the post-reform era, China’s youth are reshaping and reconsidering the role of the Communist Party in their country.

In the decades since reform, the Chinese Communist Party has managed to weather both economic and political upheaval. While peasant revolutionaries once led the country, the current leadership is pure technocrats, the product of a revamped and thriving educational system. The Party relies on young, upwardly mobile, college-educated Chinese to renew its ranks. But the processes of selection and indoctrination of future members starts long before college.

Party education begins in the early school years. In elementary school, the Young Pioneers, an organization whose members include children between the ages of 7 and 14, is a student’s first exposure to the Party. According to their official mission statement, the Young Pioneers’ goal is to promote “indoctrination of children by cultivating [positive] feelings of the Party and the socialist motherland.” They do this through various local and grass-root level organizations. Despite its mission to educate youth in the ways of the Party, it doesn’t serve as a recruitment apparatus for the CCP.

“The Young Pioneers encompasses nearly all [Chinese] children between the age of 7 and 14, and so its main function is probably not for the CCP to search for prospective members, but to organize the children for various purposes sanctioned by the CCP,” says Guo Gang, Croft Professor of Political Science at the University of Mississippi and an expert on the Chinese Communist Party.

Topics on politics, government and socialism are taught to Chinese students from an early age, though tough political issues are downplayed in the Young Pioneers in exchange for lighter subjects such as service to community and dedication to studies. In the post-reform era, the CCP has sought to propagate intellectualism amongst its members as well as the Chinese population by encouraging education and study.

For Duan Fangyi, a native of Hangzhou, being a member of the Young Pioneers felt like going the extra mile.

“We felt proud of ourselves to be Young Pioneers when we were kids,” Duan says.

Young Pioneers in Beijing take the oath of membership. Courtesy of John Pugh.
“我是中国少年先锋队队员。我在队旗下宣誓：我决心遵照中国共产党的教导，好好学习，好好工作，好好劳动，准备着：为共产主义事业，贡献出一切力量。”
“We take our oath under the flag of Young Pioneers: I promise to follow the lead and teachings of the Chinese Communist Party, to study well, to work well , to labor well – to prepare myself and sacrifice all my energy for Communism.”

The next step in the CCP’s organization of youth comes with the Communist Youth League of China (CYLC), which is open to young people between the ages of 14 and 28. It is modeled after its Soviet counterpart and namesake, the Komsomol.

“With more than 75 million members, the Communist Youth League is a more serious and institutionalized recruiting device for the CCP,” Gang notes.

Becoming a member of the CYLC is the first major commitment for any young person seeking to become a member of the Chinese Communist Party. According to Xinhua, in 2006, students accounted for approximately half of the CYLC’s members. That percentage has increased as the CCP has sought to recruit those with higher educational achievements. Although CYLC membership is not required for full membership in the Party, CYLC membership does facilitate the path to becoming a full member.

Despite the CCP’s desire to grow, full membership in the Party remains rather exclusive. A report published by the Party’s Central Committee at the beginning of 2011 pegs party membership at just over 80.2 million, making it the world’s largest political party and roughly the same size as the population of Germany. However, the number only amounts to 5.6% of China’s total population.

According to the Organization Department of the Central Committee, 21 million new applications for membership were received in 2010; only about 14% of these applicants were recruited. For that reason, many Chinese regard membership in the CYLC or CCP as a “mark of excellence.”

“It begins with writing a statement, ‘I’m willing’,” Chen Zhu recalls. She began the process while she was attending college in Shanghai. All prospective members must adhere to guidelines, which include keeping a journal and setting achievable academic and personal goals for themselves.

“You have to keep track of what goes on in your life and write down reflections: how did you react to the news? What can be done about certain issues? How does this relate to socialism?” Zhu says.

One step, which Zhu remembers with prominence, was a jury of sorts in which prospective members in her advisor’s group sat in a large circle and talked openly about what they thought of each other. When it was her turn, Zhu was glad to hear that her classmates had nothing but good things to say about her.

“It is one of my happier memories,” Zhu says with a slight blush. “I feel that my classmates who joined with me all share many qualities. They are honest and hard working; both are things which we value in our society.”

There are many benefits to membership that create incentives for young people to apply. Membership in the CCP or CYLC can help students earn scholarships and graduates find jobs. State-owned industries and major firms look favorably upon party membership. As well, party membership is virtually required for advancement in government and civil service jobs, considered by most to be some of the most stable and coveted around. Many students and other young people apply for membership because of these incentives.

Given that college graduates have multiplied in number in recent years, the competition for jobs is now fiercer than ever. According to the Chinese government, more than 6 million new graduates were looking for jobs in 2010. They were also competing with the nearly 1 million students who graduated the year before but never found a job.

But despite certain advantages, plenty of young people are choosing to stay far away from the Party. Zhao Ma, a student from Chengdu, wouldn’t dream of putting in an application.

“The number of crimes that the communists have carried out against the Chinese people is enormous,” Zhao states. “If you made a list, you could not fit it [in this room]. The list would be that long. If I became a party member, how could I live with myself?”

Zhao offers a harsh explanation for why youth are skeptical about membership in youth groups such as the CYLC.

“It would be cheating to tell them that being a member was a mark of excellence; it’s just political,” Zhao says. “In recent days, these programs have become overly politicized. How can you expect a child who is 7 years old to know about politics?”

Although not as outspoken as Zhao, joining the party did not quite feel right to Duan Fangyi either. After enjoying her time as a Young Pioneer, Duan felt a change in sentiment once she reached high school and gained a greater understanding of the events around her. After years of listening to what she describes as the “same monotonous propaganda,” Duan felt disillusioned about the culture of the Party.

“Communism is all about group, group, group!” Duan points out. “Chinese culture as a whole is collective. But we young people want to show that we are more individualistic, or at least I did. It just wasn’t my thing, and I feel like I turned out okay.”

Duan’s sentiments are matched by many of China’s youth, less political and more linked to the common theme of young adults seeking independence.

Li Shijia, a third generation member of the CCP and a class leader at Southwest University in Chongqing, represented her class at a Student Congress of the Communist Youth League of China. At the time, she had been a full-fledged party member for one year.

“During the Biao Jue [a voting session], members of the congress are supposed to raise their concerns and objections, and then vote on a measure,” Li explains. “In order for a measure to pass, it has to have an ‘overwhelming majority’ vote in favor.”

The Congress was considering an important measure to reform education. Li had carefully considered the measure and had decided that there were certain points she wanted to raise.

“I wanted to object, but I realized that when it came time, no one else was objecting,” Li details. “I asked another party member and they told me that the arbiter had told the members that they were ‘not encouraged’ to bring up objections during that day’s session, and that the measure had already been ‘approved’ by the leaders. I withheld my objection and abstained from the vote.”

Li read shortly after in a CYLC publication that the measure had received ‘100 percent approval.’

“Nothing in this world deserves 100 percent approval!” Li exclaims. “If we can see what happened there, then we can probably understand what happens at the highest levels of the government.”

After 62 years in power, the CCP’s basis of legitimacy has transitioned from revolutionary ideology to perhaps the much more demanding ideal of rising living standards and economic performance. The Party now finds itself struggling to bridge a generational gap between the young and the old; between its traditional, stalwart followers and a new, globally conscious and tech-savvy generation unafraid to question the status quo. With potential reformers, traditional believers, and the politically apathetic amongst their youth population, the CCP is under pressure to adapt its policies for the modern Chinese public.

Hunter Hunt is a senior at the University of Southern California, majoring in International Relations. This article is part of a series examining the changing attitudes of China’s youth toward the Communist Party. Some of the names in this article have been changed to protect the identities of those interviewed.