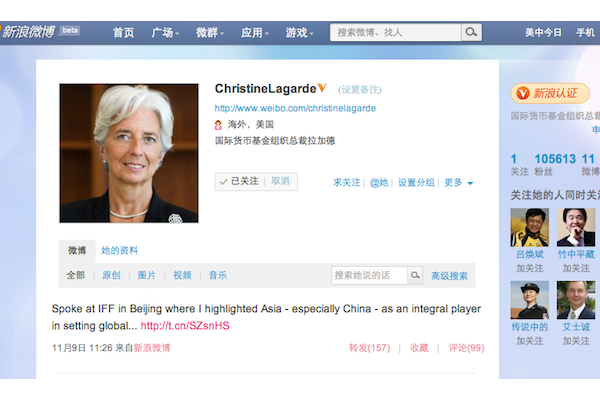 Christine Lagarde, managing director of the International Monetary Fund, created a Weibo account in advance of her recent trip to China. Lagarde visited the country Nov. 10 during a time when China’s support for the IMF is critical in managing financial crises in several European countries. During her visit, Lagarde stressed the interconnectedness of the global economy and the role of China in its recovery. Lagarde’s first message was simple: “Hello Sina weibo, looking forward to sharing updates here. Christine Lagarde, Managing Director, IMF.” Within 9 hours of posting, the message was reposted more than 1450 times with 800 comments in French, English and Chinese. Lagarde joins Bill Gates, Tom Cruise and Emma Watson as other notable Western celebrities and figures with Weibo presences.

Below is a collection of the posts left on Lagarde’s Weibo page. Unless otherwise noted, the messages were posted in English.

“Is this for real??! I’m glad IMF is making an effort in keeping rest of the world informed and connected… We’ll need it in the anticipation of another recession…” —夏萌企鹅君，Weibo user, Beijing

“Hi, Christine! I’m surprised you’re here! I feel very excited when I heard of the news that you would come to China! I always have the dream to see you and communicate with you! In my heart, you’re like a rock star full of wisdom, magic and passion! Hope you can see my message! Love you!” –Lucarax, Weibo user, Qindao, Shandong
“Welcome to China, Ms. Christine Lagarde. Our Chinese people sacrifice our health, energy, live to earn every penny. We work more than 240 hours a month, eat less healthy food, huddle up in a small apartment. Why should we pay for your people’s luxury life!” –D伯爵家的猫, Weibo user, Suzhou, Jiangsu
“What else could bring you here but asking China to save Europe? Our money came from our blood and sweat, China has a lot of kids who cannot go to school, China also has a lot of homeless. They [E.U.] are so proud and arrogant, all because China has been too nice to them.” –雨歌, Weibo user, Beijing (翻译)
“The important thing is that, we need a lot of money to perfect our resident’s security system. Europe and the United States need to know that the life is impossible to borrow money for a long time. We are a very low wage, our environment is very poor. We work so hard.” –三叶虫2008, Weibo user, Huainan, Anhui
“Europeans greed and want to enjoy the government debt surged that now unacceptable levels, rich people put all the pressure created in the economic development of resistance increasing national body, refused to accept the government reduces people’s welfare requirements” –獠牙少爷, Weibo user, Nanjing, Jiangsu
“Why would you ever want China to pay Europe’s bill? Do you have any idea how hard we work so that our government can be rich? Europeans are enjoying great benefits which are paid by their generous government, while now they have got the consequences. You asked us to help them?! We are also tax payers, and we definitely won’t let that happen! Stop pushing us and let the European pay for their debt. The key is to stop the fat social benefit, not to use other country’s money to fill this whole.” –Jack 李晨, Weibo user, Beijing
“The once-attractive policy of high social welfare has come to an end. Chinese have never believed in free lunch, every cent of our money is from blood, sweat and the sacrifice of our environment. Save Europe, that’s ok, but stop the arm sales, put aside your arrogant stance, hear the the chirping after the death of democracy.” — ichiapple, Weibo user (翻译)
“We are running out of affordable vegetables and rice. We are expecting affordable medical care. We are expecting affordable education. Do you really know what economy is? Economy is not just building houses and make ’em more and more expensive.” –冷眼孤狼, Weibo user, Shanghai
“Dear Christine, would you please tell me in direct words that…in your opinion..would you say…Our modern banking and monetary system are sustainable in the sense of being equal for all mankind and for the common good for every country??” –Neil_Ren_925, Weibo user, Ningbo，Zhejiang
“PLEASE GIVE TO CHINA A STRONGLY VOICE TO IMPROVE HUMAN RIGHTS, such as medical condition, living environment, equitable education, rotten, fake commodities etc. IF YOU DO SO, MOST OF CHINESE WILL GIVE YOU A WARM WELCOME.” –中华无所谓, Weibo user, Taizhou, Zhejiang
“Very nice speech, I agree on most of your opinions. Hopefully uncle Sam would take it the same way …about Euro zone though, IMF probably needs to be prepared for Italy, brought up the crisis might benefit some countries, but I believe IMF wouldn’t enjoy it much.” –我神阿卡林, Weibo user, Australia
“Finance has been the tool of politics, and it is far and far away from real economy. We can see the broken of Euro in the near future because of the confliction of politics if it is not improved. At present, the whole world should consider the politics more.” –Chbells, Weibo user, Shanghai

“i don’t think China plays a leading role in recovery, we face structural problem too. not count too much for China’s contributing to your bailout fund, currently gradually rebalance our surplus is enough and effective way.” –企鹅奶奶, Weibo user, Beijing
“pls don’t push the chinese government anymore, u should believe the chinese people have the intelligence to solve the problem by ourselves. we have no power or intention to help the westword as well. as for ur first tour, we hope you have a good impression to this beautiful country”  –无人知晓, Weibo user, Shuang Yashan, Heilongjiang
“Beijing government is getting more important in the global economics. But what have they brought to their people? Poor people are still very poor. The policy only focuses on economic development cannot lead the country to be a strong and steady unit.” –小白 Jas, Weibo user, Tianjin 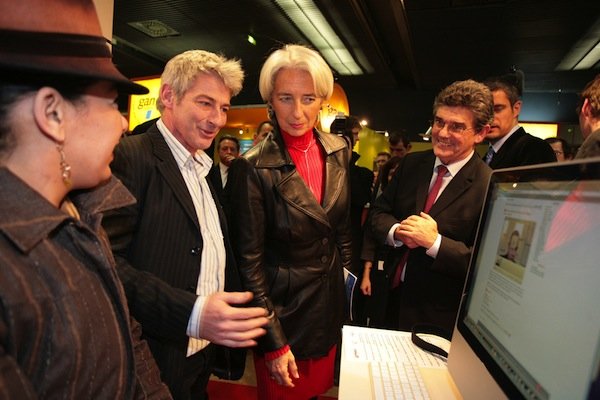