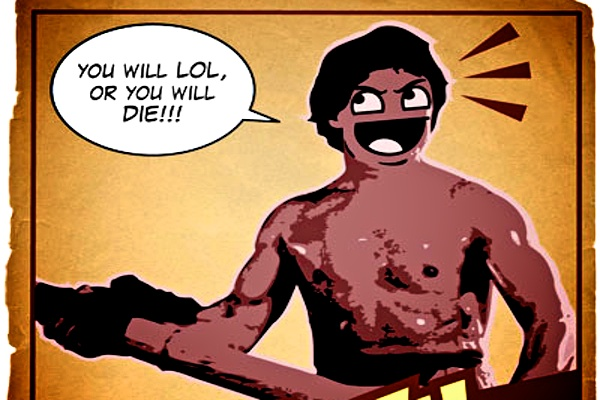 A Foreigner Walks into a Bar: Stand-Up Comedy in China

American and international comedians are finding laughs in Shanghai and Suzhou.

“I only understood about half of what you said, but what I did understand I thought was very funny!”

It was one of the nicest compliments Chris Saady had ever received. While he only recently began moonlighting as a comedian, the crowds were already falling over his every word. Even when half had been lost in translation.

Saady is part of Stand Up China, a collection of American and international comedians now breaking its way into China’s comedy scene. Founded by Turner Sparks and two friends in 2009, the group began performing at local bars in Suzhou and is the first stand-up comedy group in mainland China.

“We were horrible [at the time] because it was all our first times doing it, but we basically just had all our friends come down and watch,” Sparks says. “It filled the bar and the bar owner was happy and we all had a good time.”

But what started out as a way for a few friends to test the waters of comedy quickly grew into a staple of Suzhou’s bar scene. Each comic delivered a ten-minute set during the first performance, attracting just enough customers for the bar owner to ask the group back the next month. With crowds growing larger and larger, the act quickly evolved into a regular event.

Suzhou is a far cry from the international vibe of Shanghai, with less than half the population of its metropolitan neighbor and far fewer English speakers, stacking the odds against the group.

“Once we decided to do a monthly show at that club, [we thought] OK, more people are going to want to [perform],” Sparks says. “So we’ll have this big pool of comics and people will start writing and, you know, kind of creating their own stuff.” For the first year, they only managed to recruit five comics. As of 2011, Stand Up China had around 20 regular comics, both Chinese and foreign. 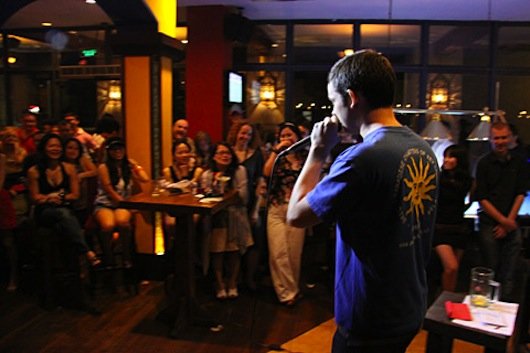 Turner Sparks lights up the crowd at Zapata’s in Suzhou.
The Shows

Stand Up China shows take place on the last Saturday of every month, and frequently in Suzhou at Family Guy-inspired The Drunken Clam and Zapata’s, a Mexican restaurant. The group’s performances also include Shanghai locations like O’Malley’s Pub. As the venue names suggest, these are expat bars that see regulars from the United States, Australia and elsewhere.

The structure of the shows is amateur-friendly as few of the comics aspire to a career in professional stand-up. Sparks, whose day job is helping run China’s first Mister Softee franchise, saw the opportunity as a way to engage with the community while testing his comedic chops. Generally, each show spans about an hour and a half and consists of five performers who each deliver ten-minute sets. Prior to the main event, there’s an open-mic night every Tuesday where performers can work to perfect their jokes.

There’s nothing overtly different about the Stand Up China shows than any other comedy act. Saady, who works in Suzhou as an English teacher for Chinese adults, describes the pre-show ritual as nothing more than, “hanging out upstairs, having a few beers, and reviewing our material with each other.”
It is the audience and atmosphere that stands out.

The typical audience boasts, unsurprisingly, a majority foreign crowd, but there are plenty of locals in the crowd – “at least about 30% of the audience,” Saady estimates. Stand Up China comics must challenge themselves with material for all segments of their audience. “You can’t really do America-specific stuff because they won’t understand it,” Sparks says.

So it’s out with quips about the traffic-ridden streets of New York or the seemingly endless speeches of Joe Biden, and in with witty observations about internet censorship and Chinese culture.

“It’s a little tough here [in China], huh? They blocked all the good sites; there’s no Facebook, there’s no Twitter, no Blogspot, no Youtube, no IMDB. IMDB, the Internet Movie Database is blocked here! Who’s the genius who red-flagged that?” ranted Joe Schaefer at a Shanghai show.

Others utilize common ground to win laughs. “Once you remove the barriers of language and culture, we’re all just people,” Saady says. “My act is mostly based on things that either piss me off or that I find to be incredibly stupid. I truly believe that those two things are universal.”

But beyond emotions, there are perhaps few things that truly qualify as common ground for an audience so diverse. Nevertheless, it’s through this diversity that some comedians are able to exercise an uncommon freedom in their act.

“We are very multicultural with a lot of different backgrounds,” says Australian Dominic Mills, who works as a food scientist and helped start Stand Up China with Sparks. “We have the advantage here where we can be a little bit more risqué, and [deliver jokes] that are more unacceptable in Western countries.”

“With my act, I’ll usually start off with something stupid that I’ve done, then move on to stupidity around the world. At some point, I may throw in some bits about China as well,” Saady says. “When I have done bits about China, I’ve found that the Chinese will be laughing the hardest of all.” And that includes jokes about the Chinese government.

What ultimately separates Stand Up China from other routines is the mix of nationalities in the group’s audience that, according to the comedians, creates an atmosphere surprisingly unburdened by political correctness.

The popularity of Stand Up China has already driven others to join in on this new niche of entertainment in China. In Shanghai, a similar stand-up collective called Kung Fu Komedy took off just a year after Stand Up China formed. The two groups frequently perform in each others’ respective cities, as well as alongside each other. They remain the only English language comedy groups in mainland China.

“Ideally, we want to start having Chinese stand-up also, as part of [the show],” Sparks says. “We’re in China, we’d like to have Chinese people doing stand-up in Chinese.”

As the stand-up audience grows in Suzhou, it’s only a matter of time before this group breaks into the mainstream.